It’s all about the sensor and software on the i7+. 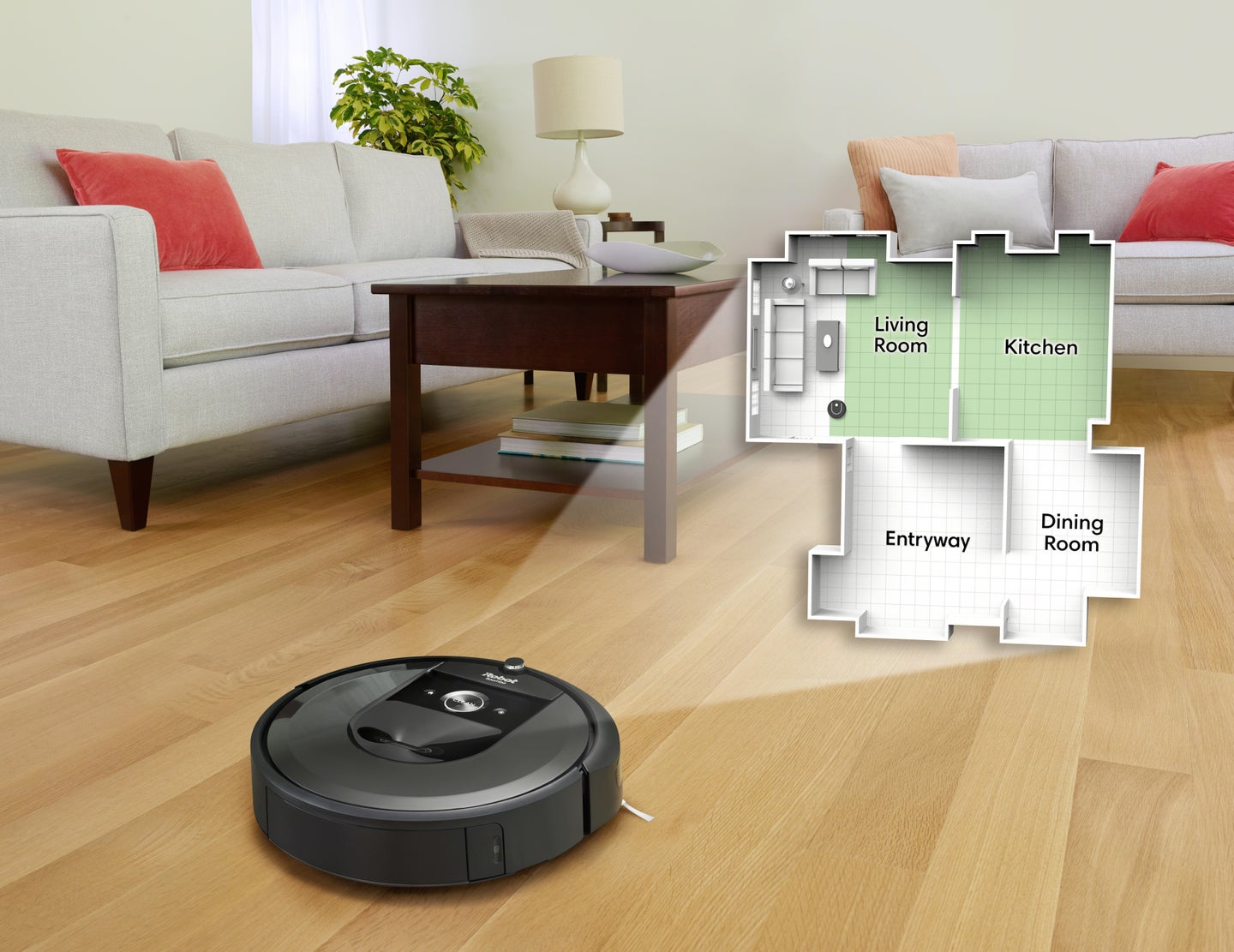 In 2018, there are generally two types of robotic or assistive devices that are worth putting in your home. The first: a smart speaker that lets you speak with Alexa, the Google Assistant, or Siri. The second? A robot that cleans your floors. If you’re going to invest in an expensive machine that’s not a toy and can move around, it should make your abode cleaner. (Compare that to the cute Kuri robot, which could cruise around a home but didn’t clean. The company recently stopped making them.)

Massachusetts-based company iRobot has been producing its floor-cleaning robots since 2002, and today, it’s announced the latest version. It’s called the i7 and it’s a Roomba that can remember the layout of your home. You can instruct it to leave its base and go tidy up a specific room, and then it can empty itself back at its dock. Here’s how it can figure out where it is in your home.

The key component of this Roomba is an imaging sensor on the top. The previous generation Roomba—the 900 series—had that too, but an update to both the hardware and the software has essentially given this latest dirt-sucker a better memory than its ancestors. That previous generation could create a map of your home as it cruised around, but the tech wasn’t yet developed enough yet for it keep that map (or even maps of multiple homes, as this one can) in its silicon brain.

“The 900 series would build and maintain a map of the home during an individual cleaning mission—once that job is done, it starts afresh the next time you press clean,” says Chris Jones, the vice president of technology at iRobot. It was a robot with no long-term memory.

The i7, though, “will now remember the environment that it’s been run in in the past, and be able to leverage that historical information on the current cleaning mission,” he says.

The imaging sensor, which points forward and up, is crucial for this process. It’s not a full-fledged camera. Instead, what it’s looking for is something simpler: “a handful of pixels in an image that form a unique lighting pattern,” Jones says. The things actually creating those patterns? “That could be the corner of your TV against a white wall,” he explains, and perhaps next to it is a picture frame “that has its own contour of light and dark.”

Jones compares those types of markers in your home, and their relationship to each other, to stars forming constellations that allow the robot to localize itself in your house. It’s also making use of the cloud to let this happen: data about these visual landmarks are kept there for the Roomba to reference. “Whenever the robot runs anew, it requests the latest from the cloud,” Jones says.

It’s an approach that makes sense at the household level, because GPS wouldn’t be accurate enough and doesn’t work well inside. (Another way that more advanced robotics systems, like self-driving cars, figure out where they are is by using a spinning laser system—LIDAR—cameras, and radar, but that type of equipment would be excessive on a vacuum.)

One of Roomba’s competitor’s, Neato, uses a laser-based mapping system, but it doesn’t have the same kind of room recognition that allows you to send it to specific zones at any given time.

All of this means that the Roomba will be ok if encounters what the robotics industry calls the “robot kidnapping problem,” Jones says: that’s what happens when someone picks the robot up and moves it to a new place.

“Using this vision approach, as soon as it sees one of these constellations, it will know where it is,” he says. (The technique iRobot is using is called visual simultaneous localization and mapping, or vSLAM.)

That imaging sensor on the Roomba isn’t the only way it can learn things about its environment. It also has one that tracks the floor as the robot moves over it, plus wheel odometry, meaning it can infer, based on the turn of the wheels, how far it has traveled, just like your car.

What this adds up to is a Roomba that can remember its environment, so you can label the map on the corresponding app by room type, and then tell the vacuum to clean a specific room by name. iRobot says the device can remember up to 10 floorplans, meaning you can “kidnap” it, take it to a new place, and it will learn that one, too. (It will also work with Alexa and the Google Assistant, so you should be able to shout at an Echo Dot for the Roomba to clean a specific room you’ve just sullied.)

Finally, it’s also the first Roomba to come with a docking station (called the Clean Base) that empties out the bot’s dust bin, producing a loud noise and sucking the dirt into a bag that holds 30 robot debris-dumps before you need to throw it out—you’ll eventually need to buy more bags for that part. With the Clean Base, the i7+ costs $949, but you can purchase just the robot itself for $699.