It’s 2018 and robots still won’t do our laundry

Existing tech is a total wash. 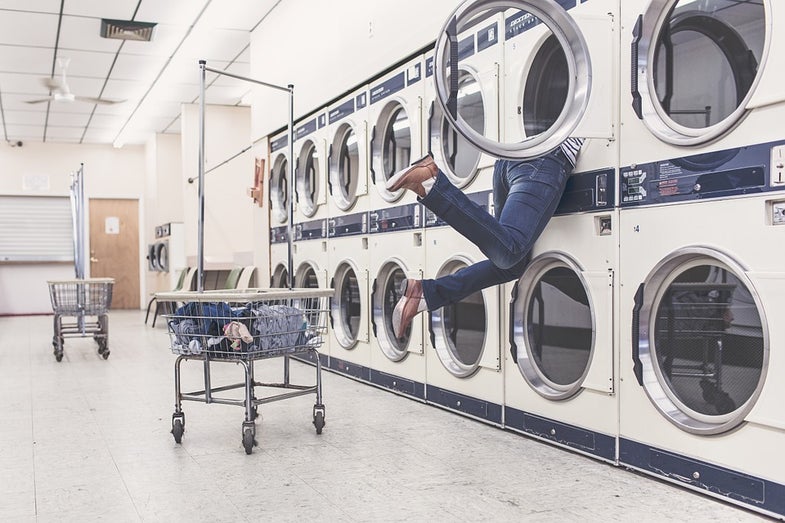 For women of the early 20th century, the first automatic laundry machine must have seemed like a miracle. Gone were the days of washboards and handcranks, of raw fingers and hunched shoulders. With just the push of a button, you could send your clothes spinning. When you returned a mere hour later, the suds had cleared and your wardrobe felt like new.

These days, though, the laundromat feels utterly devoid of miracles. We were promised self-cleaning smart homes. Instead, we’re still pouring excessive amounts of time, energy, and soap into every load. Save for a few laundry-loving masochists, it’s safe to everyone wants to see the laundry industrial complex get a kick in the pants. But if there’s so much motivation to break the wheel on the laundry cart, why don’t I have a bunch of whirling gadgets and gizmos ready to clean my clothes for me?

Apparently, before we can totally disrupt the laundry process, technology has to address the most basic steps in the process, like folding clothes. “I know for a fact a lot of companies large and small are trying to pursue this holy grail,” says Gal Rozov, founder of FoldiMate, a startup trying to develop a machine that will fold your laundry. “We’re not the only ones trying to come up with a solution to this hated chore in the home.”

At CES 2017, Rozov debuted an early prototype of FoldiMate to much fanfare. The machine, a dream inspired by Rozov’s desire to never fold shirts again, promised to fold, dewrinkle, perfume, and stack clothes that you could then easily place in your closet. But in a press preview at CES 2018 just last week, Slate reported Rozov had a more conservative core vision: He just wants FoldiMate to fold.

“It’s a very big technology feat to do folding with a machine and make it consistent, make it fast enough, and make it simple for you as an operator and for the robot to be able to adapt and still keep the fold output to your liking,” Rozov told PopSci. Right now, when getting the fold right is still a challenge, the perfuming and other features were just “adding complexity we couldn’t cope with.”

The current, simplified prototype isn’t perfect, but Rozov says this version is the closest he’s come to realizing the vision inside his head. As it stands, the user simply has to adjust two clips to secure the garment. Sensors then determine what type of garment it is—like a shirt or a pair of jeans—and folds accordingly. Humans are still needed to oversee the process, though. “The item size is mainly what we’re concerned: the thickness, the length, and the width,” Rozov says. So if you’re doing multiple shirts in a row, you can just keep feeding them to the machine, but if you’re changing from shirts to jeans, the clips will have to be adjusted.

Rozov says that folding technology has existed an industrial level for decades. Building a personal machine for in-home use has still proven challenging. The Japanese-made Laundroid purports to offer a fully automated version of the same service—a lean, mean, folding machine—but at several times the size and twice the price as FoldiMate. As online visuals show, users put freshly laundered clothes in a bin at the bottom of the Laundroid machine, which folds it behind literally closed doors, and offers it up with clean lines and crisped colors. Similar to FoldiMate, Laundroid remains more of an idea than an everyday domestic device. To get it right, both companies will have to continue to refine their robots, making them more sensitive to clothing of different shapes and sizes.

While these machines could prove to be a great first step in the future of laundry, only when we finally design clothes that never get smelly or employ personal robot butlers capable of handling every aspect of the laundry process will we truly be free.

But that doesn’t mean it’s time to call it quits and down a Tide pod. Many smaller innovations announced at CES last week inspire some hope. Realizing that many people put their laundry machines in utility closets, far removed from the kitchen sink, have built in a small “pre-treating” station to their latest top loader. And LG, in a nod to that smart home dream, released washers and dryers that can be operated remotely, with an app or Alexa voice command.

If that’s not cutting it, Rinse, a startup founded in 2013, is one of several companies trying to help the truly laundry-averse outsource their laundry entirely. Rinse allows customers in five cities to have their laundry and dry cleaning picked up between 8 and 10 p.m. any night of the week, carted off to a local laundromat or dry cleaner, and returned clean (and properly folded).

For many, laundry valet services like these might seem like a luxury, but for co-founder and CEO Ajay Prakash, however, Rinse resets the clock just like the original in-home washer/dryer did. “Some people find [laundry] therapeutic—it relieves anxiety,” he says. “But for a lot of people, it’s a relative question of, what else could you be doing with your time?”

In the end, if you can reasonably answer Prakash’s question with “I’ll spend my laundry-free time making the world a better place,” it really might be time to think outside the detergent box. But if you’re like me and all you’ll be doing is watching more TV, you can probably continue to clean your own clothes. I mean, why else would they have commercials?