Urbanista Los Angeles headphones review: Something new under the sun

The solar-powered Urbanista Los Angeles headphones make your charging cable a thing of the past. 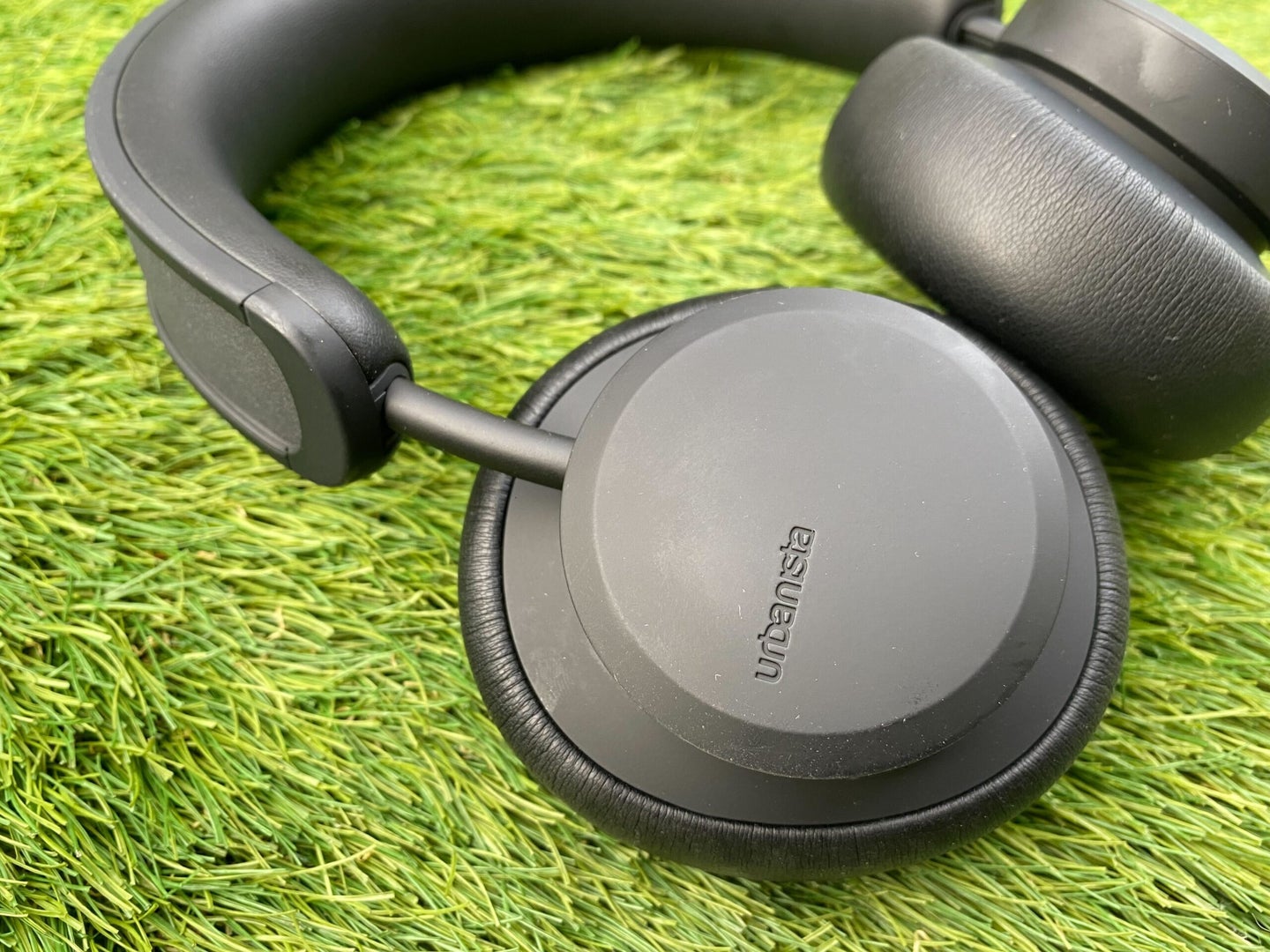 The advent of Bluetooth technology in headphones allowed us to ditch the oft-knotted inconveniences of their wired counterparts—trading them in for arguably more sleek wireless options. Despite trading in tiresome cords for sleek advantages, Bluetooth headphones are still burdened by their need for a charger. Unlike with wired headphones, you run the risk of wireless headphones dying mid-workout, flight, or during your commute, with virtually no way to refuel until you reach a power outlet or pack a battery backup. That’s where the solar cell technology of the Urbanista Los Angeles headphones comes in.

The headphones’ pioneering design uses a panel on top of the headband to convert all light, both indoors and outdoors, into playtime, so you don’t need to worry about charging or running out of battery when you need your headphones most. With virtually unlimited battery life—plus features like active noise canceling (ANC), Siri and Google Voice Assistant, and on-ear detection—the Urbanista Los Angeles headphones pack a lot of modern technology into a classic silhouette. While the sound might not be as expressive as you get from some over-ear headphones, the continually replenishing battery life outweighs any dips in the audio profile. Let’s shed some light on these first-of-their-kind headphones.

Open the box and you’ll find headphones, a carrying case, and a USB-C charging cable. The Urbanista Los Angeles headphones’ design exhibits no-frills Scandinavian minimalism, especially in the Midnight Black option, which is void of some of the detailing that other over-ear headphones might have. At a casual glance, these are obviously related to the brand’s own Miami model, but on the top of the padded headband, you’ll see the unique black solar cell panel, which blends in fairly seamlessly with the headphones, albeit with a minimal “Powerfoyle” trademark. If all-black isn’t quite your style, the Urbanista Los Angeles also comes in Sand Gold finish for a lighter look. But, unlike with the black alternative, the panel across the headband doesn’t blend in as seamlessly with the tan color.

On the right ear cup, you’ll find three buttons that control volume, playback control, and power, while the left ear cup is home to the shortcut button for toggling between noise cancellation modes or queuing up a voice assistant, plus the input for a USB-C charger if the solar-powered option isn’t cutting it. The most blatant design flaw of the Urbanista is that the right ear cup buttons are in a consecutive row with no gaps, making the controls difficult to navigate at first without taking them off your head. You can get accustomed to the layout with a bit of use, but I just opted to use my phone for volume and playback.

The padded cups and headband (covered in vegan “leather”) are one of the most comfortable over-the-ear headphones I’ve tried—and cut out some noise even when you’re not using ANC. I could comfortably wear them for several hours without a headache or hiccup, which I can’t say for every over-ear design. To adjust the size of the headphones to your head, just pull the cup down for an extended length of the headband.

Getting started with the Urbanista Los Angeles

Setting up these headphones takes just a few minutes and is on par with similar Bluetooth designs in terms of ease—power on by holding down the center button on the right ear cup and navigate to the Urbanista Los Angeles listing under Bluetooth devices. Once you’ve paired up the devices, you can power on the headphones.

Though not a prerequisite for setup, you can also download the Urbanista App (available for both iOS and Android) to get a better sense of how the solar-powered function operates—it shows the gain produced by the sunlight/indoor light alone and the drain caused by using the headphones in different sound modes. The app doesn’t have plentiful controls to choose from, but if you like to keep an eye on battery life or want to toggle between ANC, Ambient Mode, and the default sound setting, it’s a nice addition to the Urbanistas (plus it lets you update the firmware, if required).

The Urbanista Los Angeles is equipped with some standard features that you would expect from most modern over-ear wireless headphones, including iOS and Android compatibility, voice control support, along with reliable Bluetooth 5.0 (SBC and AAC codecs) connectivity. But where the Urbanista Los Angeles shine is through the headphones’ standout features, like the innovative solar charging system, listening modes, plus on-ear detection.

The best feature of the Urbanista Los Angeles over-ear headphones is arguably the Powerfoyle system located atop the headband. Not only is the system discrete, but it confronts one of the biggest annoyances of wireless headphones: charging. In the two months I’ve used the Urbanistas, I’ve not once plugged them into an outlet—a great feature for someone who listens to music almost constantly.

Admittedly, the charge produced by artificial lights indoors won’t be adequate for continuous playtime, as a look inside the Urbanista app reveals a charging force of under .2 mA under a lamp or overhead bulb and a drain of 3.5 mA from the default headphone settings. Near a window, this charge can scale up to about 1 mA, depending on how much sunlight is streaming through the glass pane (my NYC apartment is moderately gloomy, so even by the window the Urbanista only had a .5 mA charge).

But once you step outside into the sun, the trickle-charging becomes a lot more impressive. Even in a shaded area on a cloudy day, you can see an input charge up to about 2.5 mA, which means your battery supply will drain much slower than it would compared to sitting indoors listening to your favorite tracks. In direct sunlight, this charge can jump up to 22 mA of gain, which offsets the drain of usage—you might even see a boosted battery if you’re walking outside in direct light.

Solar charging aside, the battery life on the Urbanista Los Angeles is already impressive, with a total playtime of 80 hours available. The impressive battery life, plus Powerfoyle tech imbued in these headphones, make them beat out all others when it comes to continuous play.

The Urbanista Los Angeles also has the welcome addition of ANC and an awareness mode. To toggle between these, as well as the default of neither, you can use the button on the left ear cup or go inside the Urbanista App and select between the three. Urbanista’s ANC function works similarly to other headphones design—the electric condenser mic captures ambient noise and counteracts it with an opposite sound wave to eliminate external noise. When walking on a crowded street or in a store among other customers, the ANC function tuned out almost all sounds, which I can imagine is also aided by the plush padded ear cups. And, unlike some other noise-canceling headphones, wearing the Urbanista Los Angeles in ANC mode produced no mild headache or discomfort over extended periods, so I could use them comfortably for hours-on-end in a coffee shop. The Urbanista Los Angeles won’t beat out an industry leader for ANC headphones such as the Sony WH-1000XM4 (a staff-favorite wireless headphone), but it will certainly outlast them.

The same microphones let you answer and make calls clearly. Even when I was walking outside in windy conditions, my friend could hear me chatting—definitely an improvement over options like the NuraTrue earbuds, which I appreciate for their personalized sound but that pick up too much exterior noise on calls. And for those times when you need to tune into your surroundings, Urbanista also offers an Ambient Mode, which slightly amplifies external noise using the mic. I tested the Ambient Mode by simultaneously playing music on the headphones and from my laptop computer to see how much of the external frequency was picked up by the Urbanistas. What came through was a muted noise, without many distinguishable tones—it sounded surprisingly similar to the hum of my heater. So while the Ambient Mode can queue you into outside noises better than ANC, you may still need to take off your headphones if someone off-axis or at an extended distance asks you a question.

Thankfully, in the case you do need to take off your headphones to order coffee, chat with a colleague, or check in at the gym, the Urbanista Los Angeles’ offers an on-ear detection mode that pauses your music if the headphones are removed. And no need to queue your track once they’re back on—your music will continue playing right where you left off. The result is a fairly seamless transition without missing much of your track, albeit a second delay once the headphones are back securely over your ears.

When it comes to sound, the Urbanista Los Angeles’ 40mm dynamic drivers offer an overall satisfactory soundscape, delivering the standard human hearing range of 20 Hz to 20 kHz with a majority of detail hovering around the low and high frequencies. Lower notes are rich and comprehensive, with an emphasis on bass that’s ideal for heavy-hitting tracks like “WILSHIRE” by Tyler, The Creator. On the opposite end of the spectrum, high notes are light and crisp without becoming bogged down by the bass-heavy emphasis.

But if there was anything sacrificed in the overall dynamism of the Urbanista Los Angeles sound, it’s the midrange notes, which tend to be overwhelmed by the lower frequencies. Tracks with strong vocals like “Lose Control” by Elijah Waters lost some of the tenacity that sets the tone, resulting in a dialed down and somewhat flat experience. And the bare-bones app doesn’t offer any EQ adjustment options, so you have to enjoy a sound signature like the headphones’ namesake: warm, consistently comfortable but sometimes congested.

And if you’re anything like me and crank the volume to the highest levels on your favorite tracks, you may be surprised to find that the Urbanistas aren’t quite as bodacious when it comes to volume compared to other headphones, like the Pioneer DJ HDJ-CUE1BT (one of my personal favorites when I want to up the day’s tempo). While admittedly this might be best for your long-term hearing capabilities, I couldn’t help but wish in the moment that these headphones got a bit louder.

So, who should buy the Urbanista Los Angeles headphones?

For anyone who loves the freedom that comes with wireless headphones, but dislikes relying on a charging cable, the Urbanista Los Angeles is a clear winner when it comes to playtime and battery life. At $200, the solar-charging capabilities aren’t cheap but they mean your headphone battery rarely dips to dangerous levels and will charge up just by sitting on a windowsill. If you mainly use your headphones indoors you might need to resort to the charging cable from time to time, though the 80-hour battery life allows you to do so a lot less than you would with standard Bluetooth wireless headphones. And while the audio capabilities won’t satisfy a choosy audiophile, the overall sound quality is balanced enough to make these headphones a worthy purchase.