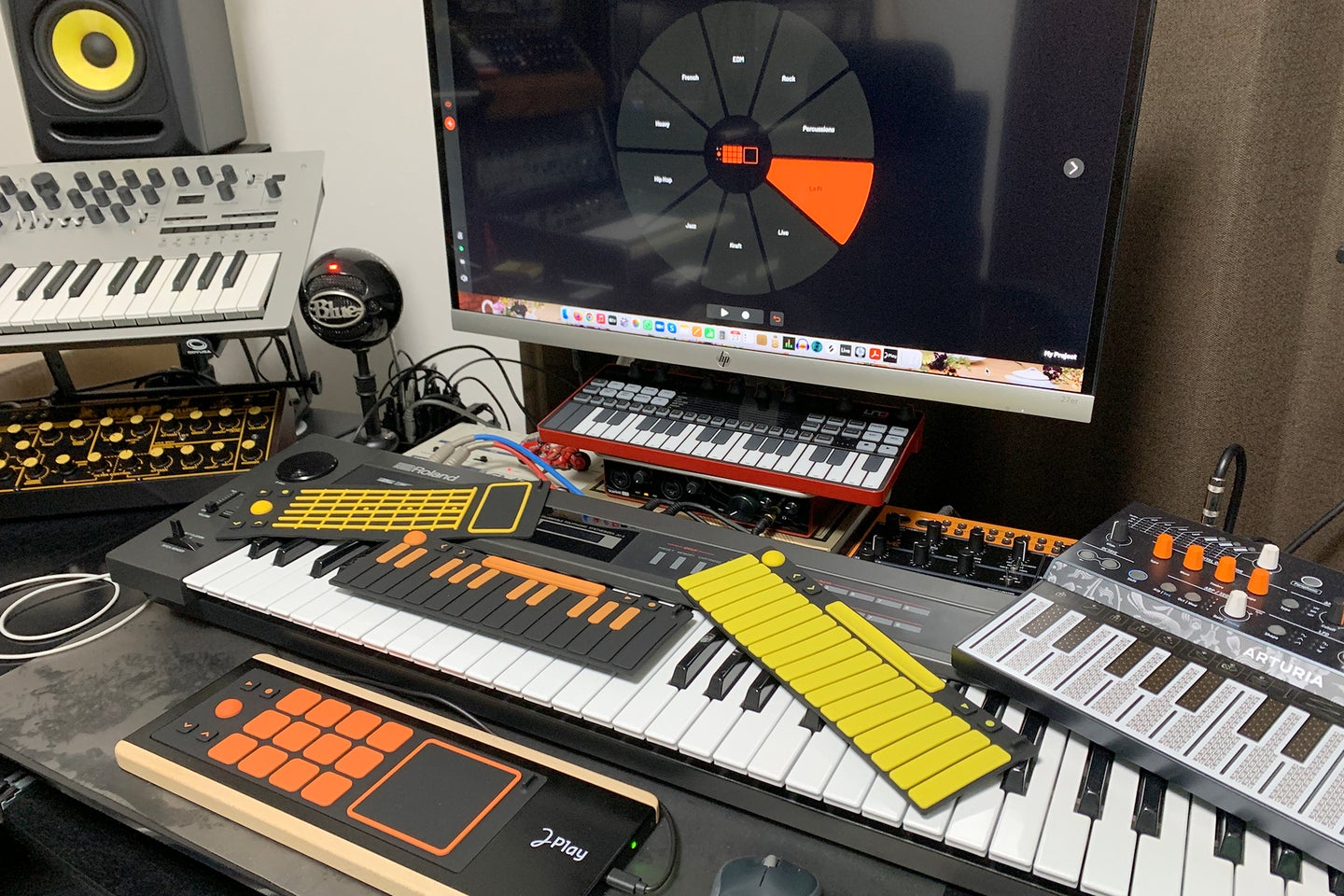 Every MIDI controller is the same, right? You’ve got some piano-style keys, a few buttons … maybe some knobs. No surprises, right? Well, not every MIDI controller. Joué Music Instruments is here to sound the alarm that your control surface can be just as creatively inspiring as any physical instrument or musical software.

What is the Joué Play controller?

Joué Play is an ultra-portable, customizable MIDI controller with swappable and velocity-sensitive silicone mats representing different control surfaces: piano keys, drum pads, a 17-key chromatic keyboard-like module called Scaler, and a guitar fretboard (with aftertouch and pitch modulation). It’s available in multiple configurations, with either two ($245) or four pads ($295), and in two color schemes, Fire (tested) and Water. In the box you’ll also find a USB-C cable with a number of adapters for connecting to your computer (both macOS and Windows are supported) or an iPad. Don’t worry, it’s class-compliant so no additional power source is needed. This is a controller as convenient to pack in a backpack as it is a means to unpack the sounds in your head.

A musical instrument should be inspiring to touch and although Joué Play is essentially a controller, it certainly fits the bill. The base is made of beech (real wood!) and metal, and the rubber modules are smooth and surprisingly responsive. There’s a satisfying heft to the whole thing: it won’t go scooting away down the desk no matter how much you get into it. The overall design aesthetic is lovely as well. From the moment you first pick it up, you’re aware that this is something special, a real labor of love for the creators, a pair of French innovators one of whom previously developed Lemur, one of the first touch-based control surfaces for music-making (adopted by Björk, Daft Punk, and Nine Inch Nails, among others).

The other half of Joué Play is the free bundled app (Mac/PC/iOS). With it, you can load sounds to play from the controller and record short passages of up to four audio tracks and 32 bars. These can then be exported as audio or MIDI files.

Setting up the Joué Play

Setting up Joué Play is, as they say, child’s play. Just plug in the USB cable and it instantly works with the app or software instruments in your digital audio workstation of choice (I typically use Apple’s Logic Pro X for my DAW, but the Play would be a great tool for Ableton Live, Bitwig, etc.). Integration is especially smooth with the app. To change to a new category of sound (piano, bass guitar, synthesizer, drums), just swap out the rubber mat for another; the base board uses RFID chips in the rubber mats to recognize when to change app tracks and machines. Along with the main musical input part of each Magic Module (as Joué Music Instruments calls them), the mats have transport controls, arrows for moving up and down octaves, a bubble button, and other features. Some are purposely vague—Joué Music Instruments wants you to explore their functionality, which uniquely changes with every new sound in the app.

Using the Joué Play is a lovely experience. I’ve been making ambient and other kinds of electronic music for the better part of three decades now and I found myself coming up with new expressions that I never would have before, particularly when exploring the non-standard controls. As a keyboardist, I tend to favor basic piano-style note playing but Joué Play encouraged me to break away from this. My normal controller, a vintage Roland synthesizer from the ’80s, has a solid keybed but little in the way of unusual control functions. My fingers rarely stray from the keys. With Joué Play, they were much more mobile, exploring and experimenting. I found the guitar module particularly inspiring, coaxing out not only playing styles and note combinations that I wouldn’t normally come up with but a smile on my face. Tap out a beat, lay down some sweeping pads, bend some chords—all without swapping out hardware.

If Joué Play has a downside, it’s the app. While it’s impressive sonically, it feels half-baked, with limited editing features. While functionality is identical, the iPad edition is a slightly better experience just because it’s more conducive to touch. You’ve already in exploratory touch mode using the controller. Suddenly switching to a mouse feels like a betrayal to your hands.

So, who should buy the Joué Play?

With its unique approach, I’d recommend Joué Play to anyone looking to widen their musical horizons. Beginners will enjoy exploring the intuitive modules and app, while pros will appreciate the way it can disrupt habits and inspire out-of-the-box creative thinking. If you find the app limiting, as I did, and want to use Joué Play deeply with soft synths in your DAW, Joué offers a Pro firmware upgrade ($50) that adds MPE (MIDI Polyphonic Expression) and deep customization of the controllers’ Edit port. MPE is the current pinnacle of controller expression, with per-note modulation, something that I could only dream of having access to before without shelling out hundreds of dollars. Fifty dollars is an absolute steal. While there are other unique controllers out there at a similar price—Keith McMillen’s QnNeo ($199) comes to mind—none of them offer a modular approach like Joué Play. It looks good, feels good, and will have you thinking about music composition in a whole new way.

Adam Douglas is a freelance writer. His focus includes audio production-related technology, music with a special emphasis on electronic and dance, and Japanese culture, bringing together the three main obsessions of his life. He started at Popular Science in 2021.