Apple iPad 9 and iPad Mini 6: Everything you need to know

Apple unveiled two new iPads with some fun new features for us to play with. 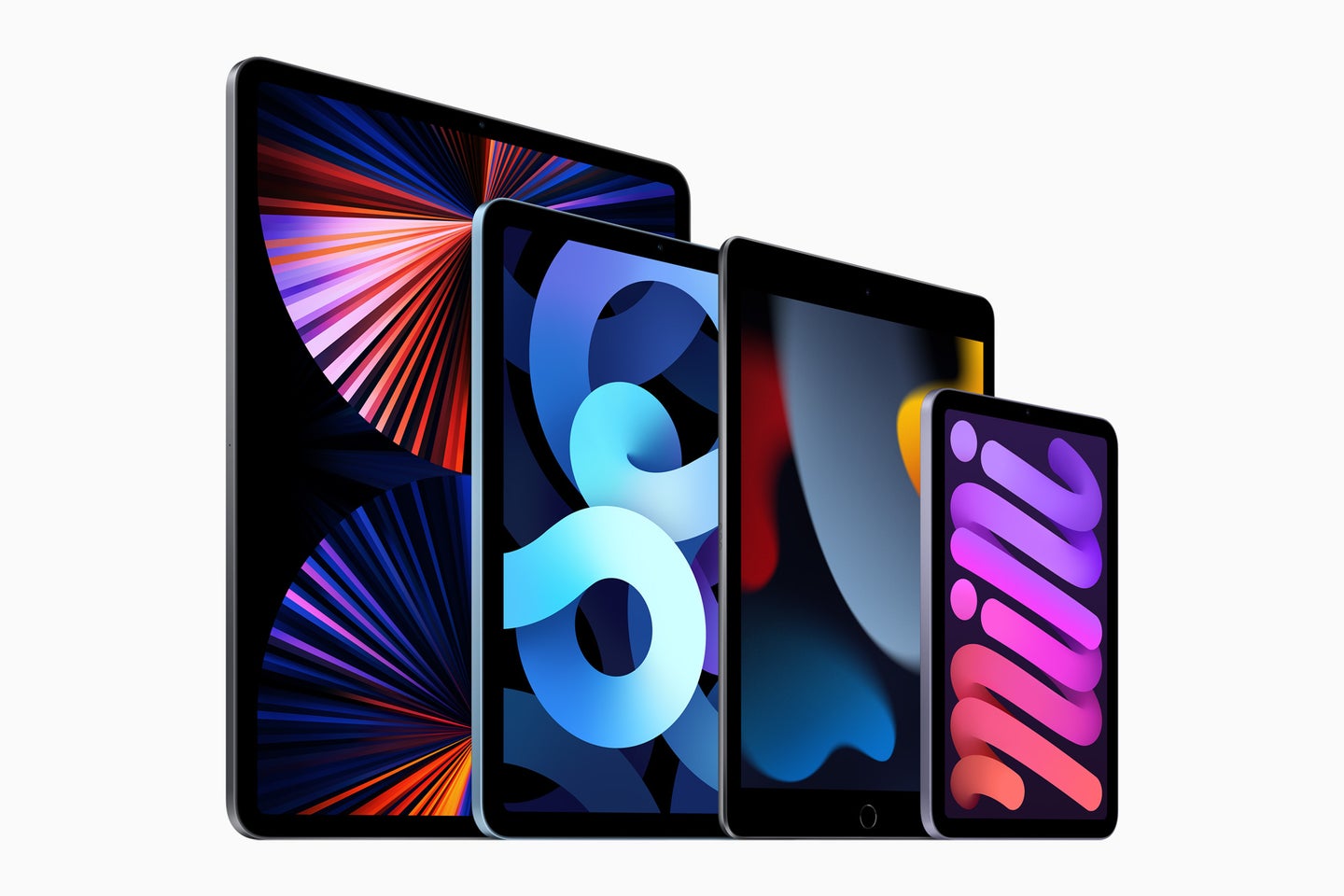 Apple updated two of the four iPad designs, the iPad and the iPad Mini. Apple
SHARE

Apple announced a pair of new iPads, the ninth-generation iPad and the sixth-generation iPad Mini, during its “California Streaming” event on September 14, 2021. Both iPads feature new versions of Apple’s Bionic chip, new camera-related features, and support for accessories like the Apple Pencil and Smart Keyboard, among other improvements. Apple also announced that iPadOS 15, the new version of its tablet operating system, will launch Monday, Sept. 20. Let’s scour through the details to pick out what’s exciting about these new iPads.

The new version of Apple’s baseline iPad features a few meaningful spotlight upgrades but is generally bringing the least expensive version of the tablet up to date with improvements tested in previous versions of other iPads, such as the iPad Pro. The iPad 9 features an upgraded A13 Bionic chipset (debuted in 2019), which Apple claims should deliver a 20-percent performance bump from the previous model. That should allow the standard iPad to better handle games and other apps that require heavy processing power. It features a 10.2-inch Retina display, which now features True Tone, an ambient light sensor that can adjust the screen color temperature based on the lighting in the room.

Perhaps the most interesting and exciting improvements to the new iPad reside in its cameras. It features an upgraded 12MP ultra-wide front camera and supports Center Stage, a technology introduced on last year’s iPad Pro that can dynamically adjust the front camera’s framing for video calls. Effectively, if you move or another person enters the camera’s view, the camera will self-adjust to the best composition for the new situation.

Many features remain largely unchanged over the last model. It’s still the same size—6.8 inches by 9.8 inches by 0.29 inches (WHD)—with a 10.2-inch LED IPS retina display and has the same external features, including a home button with Touch ID, lightning port, and headphone jack. The 32.4 Watt Hour battery still provides up to 10 hours of battery life.

The new iPad also gets support for Apple’s tablet accessories, though it’s something of a half-step. The iPad 9 works with the Apple Smart Keyboard and the first-generation Apple Pencil.

Apple doubled the size of both storage options for the new iPad. The $329.99 base model now features 64GB of storage, or $479.99 with cellular support. There’s also a more expensive 256GB model starting at $479, or $609.99 with cell support. The iPad 9 will be available for pre-order now and will hit stores September 24.

The new iPad Mini received a larger, more robust, update. The smallest member of the iPad family got a visual refresh that brings it more in line with the iPhone and iMac than the rest of the tablet line, as well as substantial hardware improvements that make it more of a processing powerhouse.

At a glance, Apple has redesigned the exterior of the iPad Mini in the image of recent iPhones. The flat, matte, metallic chassis comes in four colors: space grey, pink, purple, and a gold and off-white color called “starlight.” Measuring 5.3 inches by 7.69 inches by 0.25 inches, Apple’s tightened up “all-screen” design features an 8.3-inch LED liquid retina display with smaller bezels. The display also supports True Tone. With the reduced bezels, Apple has removed the button at the bottom of the screen and added Touch ID fingerprint security to the button in the device’s top-right corner. On the bottom, Apple’s replaced the iPad Mini’s Lightning port with a USB-C port.

Under the hood, the iPad Mini 6 features Apple’s A15 Bionic chipset with a 6-core CPU, 5-core GPU, and a 16-core neural engine to process machine-learning functions. According to Apple, the new hardware produces substantial performance improvements. It also features 5G support, allowing those models with cellular support to get higher speeds off mobile WiFi, up to 3.5Gbps.

The iPad Mini features upgraded 12MP cameras on the front and back. Like the iPad 9, the front camera features an ultra-wide lens that enables Center Stage support. The rear camera has a larger aperture to let in more light and True Tone flash, a feature that helps the camera capture better images in low-light situations.

Lastly, like the standard iPad, the iPad Mini 6 adds more Apple accessory support but it can pair with the far superior second-generation Apple Pencil.

With two new iPads, it shouldn’t come as a surprise to anyone that Apple also had information about the next version of its tablet operating system, iPadOS, up its sleeve. iPadOS 15 has been in beta since shortly after it was first announced in June but it’s worth looking at some of what’s coming to iPads new and old in the very near future.

iPadOS adds a new multitasking menu, which allows you to change how you divide the screen between a pair of apps, like shifting one app to the left or right or have two equal-size windows split down the middle. It’s also possible to select an email or note and have it open up “over” the apps you have open in what’s called the “center window.”

Also in the vein of multitasking, iPads now have the ability to pull up a quick note by swiping up from the corner of the screen or using a keyboard shortcut. Quick notes support touch and text, so you can literally jot a note or type it in. Perhaps the coolest feature: If you highlight text on a web page in Safari, you can create a quick note that will include a link to the page and return you to the highlighted text.

Coming over from iOS, the iPad now has an “app library” that lets you quickly scan through all of your apps, rather than scrolling page by page. You can also mix widgets and app icons on the iPad home screen and adjust their individual sizes. From the macOS side of things, there’s also an “app switcher” on the home screen that looks just like the app bar from a Macbook or iMac.

FaceTime and screen sharing also get some big upgrades. You can now start video calls with Android and Windows devices using FaceTime! The iPads can share screens through FaceTime and use a feature called “SharePlay,” which lets you watch TV or listen to music with picture-in-picture video chat. Lastly, FaceTime calls now support spatial audio and Apple’s “portrait mode,” which creates a digital bokeh effect to sharpen your picture and blur your background.

These are just a few of the many, many, many tweaks and upgrades coming to iOS and Apple’s core apps. Apple announced that iPadOS 15 will launch on September 20. It’s worth noting that some iPadOS 15 features, such as SharePlay, won’t be available until later this year.

Q: What else did Apple reveal at the “California Streaming” event?

“California Streaming” was Apple’s annual fall event where it traditionally reveals the next iPhone. In addition to announcing the iPad 9 and iPad Mini 6, Apple showed off a slate of original TV and films for Apple TV+, the Apple Watch Series 7, and the iPhone 13 line.

Q: When will the new iPads be available?

Q: What iPads are compatible with iPadOS 15?

The following iPads are available with iPadOS 15:

We’re planning to take a thorough look at all the new devices Apple announced at “California Streaming,” including the iPhone 13 and Apple Watch Series 7, so keep an eye out for PopSci’s full reviews in the next few weeks.

Related: The best tablet for gaming, drawing, editing and more