Michigan is practically giving away clean water—but not to Flint 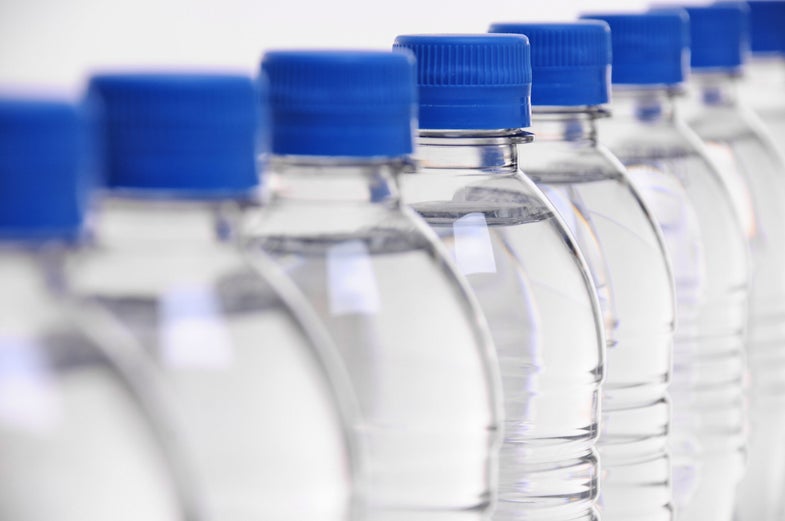 select focus on middle bottle in a row of water bottles. tezzstock
SHARE

For the thousands of tourists who take to the Great Lakes each summer, Michigan seems like a waterlogged oasis in the middle of an otherwise crusty continent. But for all its soggy splendor (the mitt-shaped midwestern state is surrounded on three sides by water), the last few years have read like an unmitigated disaster.

In 2014, officials moved the residents of Flint, Michigan off their historic water source—treated H20 from Lake Huron and the Detroit River—to improperly treated liquid pulled from the Flint River. Two years later, Michigan’s governor declared a state of emergency when it could no longer be denied that drinking and otherwise using the water piped in from Flint River had exposed thousands of children to high levels of the neurotoxin lead and may have triggered a deadly outbreak of Legionnaires’ disease.

Since January 2016, Flint residents have lived on bottles of water delivered by the state government by the thousands. On April 6, officials announced the water drops would stop, saying the lead levels in Flint tap water had been meeting federal limits for almost two years. The move was criticized by locals, many of whom expressed their distrust of the water—and the people in charge of it.

At the same time, another water bottling issue has been brewing in the state. Just four days earlier, on April 2, the Michigan Department of Environmental Quality approved a widely-protested plan that would allow the snack company Nestlé to pump 250 gallons of water a minute from White Pine Springs, which the company will then bottle, brand like Nestlé Pure Life Purified Water or Ice Mountain 100% Natural Spring Water, and sell (at least in New York) for about $2.50 a pop.

The timing, though coincidental, brings to the forefront an issue of increasing international importance: the privatization of water.

The history of bottled water is actually rather murky. Some say it was Holy Well bottling in the United Kingdom, which first began selling spring water in 1622, under the reign of King James I. Others trace it to Jackson’s Spa, in Boston, which began selling its allegedly medicinal water in 1767. The intervening 150 years saw hundreds of other companies get into the water game, including Nestlé, which got in the bottling game in 1843 in Switzerland. By 2016, bottled water sales hit $16 billion in the United States alone and are expected to keep rising around the world.

At the same time water bottle sales have shot up, access to clean and affordable water has declined. La Paz in Bolivia, Cape Town in South Africa, and numerous other cities are hitting the rocky bottom of their natural aquifers and glacial reserves. While there’s certainly enough water on the planet—Earth has an estimated 326 million trillion gallons of it—it’s not always in the right places or in the right form. (Most of Earth’s water is stored in its oceans, which humans cannot directly consume due to high saline content.)

Water bottling companies like Nestlé and Coca-Cola may seem like the solution to many of these problems. Their product is potable and portable. In some areas, like the northeastern United States, there has been an uptick in rainfall just as other cities have become more arid, which makes water redistribution a tantalizing thought. The same is true for communities like Flint, where waters are so contaminated locals had no choice but to bus in some liquid life from off-site.

But experts continue to urge caution. For one, the companies that bottle water often do so cheaply, which means companies are pocketing the vast majority of those billions, instead of sharing them with the cities from which they take water. In the case of Nestlé’s operations in Michigan, the company was paying just $200 in extraction fees, according to a 2017 investigation by Bloomberg. And a price tag was conspicuously absent from news reports on the additional bottling rights Nestlé secured in Michigan this month. In other states like Maine and Texas, the Bloomberg article notes, absolute capture laws allow landowners—whether they’re an average joe or a multinational corporation—to suck every ounce of groundwater beneath their property, free of charge.

In already-arid places like Texas, these loosey-goosey water rights pose clear problems. As groundwater is rapidly depleted across the United States, drought looms ever larger. But the Great Lakes state aren’t immune just because they have abundant H20. In advance of this month’s permit approval for new Nestlé pumping, 80,945 Michiganders wrote to their officials in opposition to the permit. Just 75 public comments were in favor. Among those who dissented, concerns over corporate greed were cited regularly. Many people also stated their belief that water is a right, not a commodity.

Other concerns center on the environment. Even in a place where water appears to flow aplenty, these concerns appear to be founded. Numerous studies, including those conducted by Nestlé itself, suggest aggressive pumping can and already has caused ecological damages. One attempted solution has been to cap the gallons pumped each day, there by conserving the watershed. But Nestlé has been accused of pumping beyond the permit in the past. In the midst of a recent drought, the company appears to have taken more than its legal allotment of water from California’s San Bernardino National Forest, where the company was operating with little environmental oversight. Between 1947 and 2015, the state’s water board reported, Nestlé pumped an average of 62.6 million gallons a year, but may have only had permits to extract 8.5 million gallons annually.

When juxtaposed against the crisis in Flint, the promise and peril of bottled water seems particularly stark. After public officials made disastrous decisions, bottled water was the only thing keeping residents safe and their thirst slaked. But now that the government-subsidized shipments are done, it’s questionable whether the people of Flint will be able to pay for bottled water on their own. Flint is one of the poorest cities in the nation and many residents have wracked up thousands of dollars in water bills despite being unable to safely drink the liquid sent to their homes and schools. Meanwhile, mere miles away, premium Michigan water is being pumped for profit.

Instead of offering us a sideways glance at tragedy, Flint seems to provide a glimpse into the future. As EPA programs protecting our waters from pollution are rolled back, for-profit companies gobble up pumping permits, and freshwater becomes harder to access, bottled water sales will only grow. While many will find some refuge from thirst in Nestlé Pure Life or Coca Cola’s Dasani bottles, the industry’s increasing relevance will require equal scrutiny.