How about this disease-infested rat weather we’re having?

It's a beautiful day for bacteria. 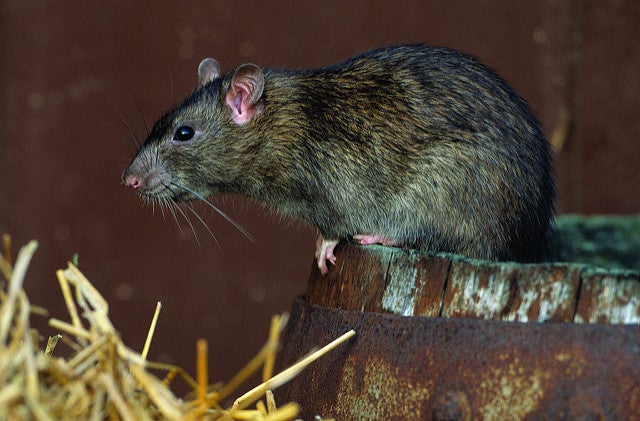 The rats and mice that populate our sewers, barns, dumps, and alleys carry all kinds of microbes that can sicken people. Our rodent neighbors have been implicated in outbreaks of infections ranging from plague to hantavirus.

It turns out that the environment a rat scurries through can make it more likely to pick up certain pathogens, scientists reported recently in the journal EcoHealth. Norway rats were more likely to carry C. difficile after cooler weather, E. coli near cracked pavement, and MRSA if it hadn’t rained much recently.

There didn’t seem to be one weather pattern or piece of the cityscape that always meant more germ-bearing rats. But finding out which ones matter for different diseases could help us predict when outbreaks are likely to happen in people, says coauthor Jamie Rothenburger, a veterinary pathologist and assistant professor at the University of Calgary Faculty of Veterinary Medicine in Canada.

Understanding why rats become infected can give us clues about how we might be exposed to these germs. Until now, though, we’ve mostly focused on traits relating to the rats themselves, such as age or the presence of bite wounds.

So Rothenburger and her colleagues investigated as many weather and landscape features that urban rats encounter as possible. They tested rats that had been captured from 43 alleyways in Vancouver for four kinds of bacteria that can cause disease in people: antibiotic-resistant E. coli, C. difficile, MRSA, and Bartonella.

The team measured 48 different characteristics of the alleys where the rats had been lurking, such as the amount of garbage, how dilapidated the pavement was, and what kinds of buildings were nearby. Rothenburger pored over weather records for the 90 days before rats were nabbed as well. “The day that you catch an animal isn’t the day it got infected with these pathogens,” she says. A rat could have picked them up weeks earlier—and because none of these bacteria make the rats sick, the animals may harbor chronic infections and spread them amongst themselves, the environment, and possibly people.

Several aspects of the rats’ habitat did seem to be related to their odds of carrying different bacteria. Rats had a better chance of testing positive for C. difficile when temperatures had been below 55 degrees Fahrenheit three months earlier. This might be because C. difficile spores fare poorly in hot weather, so after a warm spell there is less bacteria around for rats to pick up.

Rats were more likely to carry MRSA if it hadn’t rained much in the past two weeks. It’s possible that rain flushes MRSA out of the alley or prompts the rats to hunker down in their burrows. So in dry conditions, “Maybe they’re behaving differently and being more adventurous, and maybe more MRSA is able to build up in the environment for them to contact,” Rothenburger says.

Rats were also more likely to be infected with MRSA if they’d been captured from city blocks with food gardens, soup kitchens, or shelters, perhaps because they’d picked up bacteria left behind by people.

If a rat’s alley had a lot of dirt and cracked pavement, the rodent had a better chance of carrying antibiotic-resistant E. coli. It could be that soil makes an ideal home for the bacteria, which rats picked up while burrowing through cracks in the pavement.

Rats were more likely to be infected with Bartonella after mild weather, Rothenburger has also found. While rats likely pick up the other three infections from their surroundings, Bartonella is transmitted by fleas, which may be unable to survive in cooler temperatures.

It’s not clear at this point why weather and landscaping impacted each pathogen so differently. In future, Rothenburger hopes, researchers will probe why some germs are more sensitive to things like heat or crumbling pavement than others, whether these patterns hold for rats around the world, and what other environmental features might play a role in a pathogen’s ability to survive and infect rats.

Although the bacteria Rothenburger examined can make people ill, there isn’t solid evidence that rats actually play any part in spreading them to us. However, rats are the main culprits behind other diseases like Seoul virus. And there are plenty of diseases transmitted by other wild animals.

If we can figure out what kind of weather or habitat drives their spread, we could take steps to prevent these germs from felling people. That could mean resurfacing cracked pavement to keep rodents from encountering and spreading certain pathogens, or warning hospitals to expect more infections after a spate of cool weather.