The Spawn of Spore

Three months before his long-anticipated Spore, Will Wright releases the Creature Creator 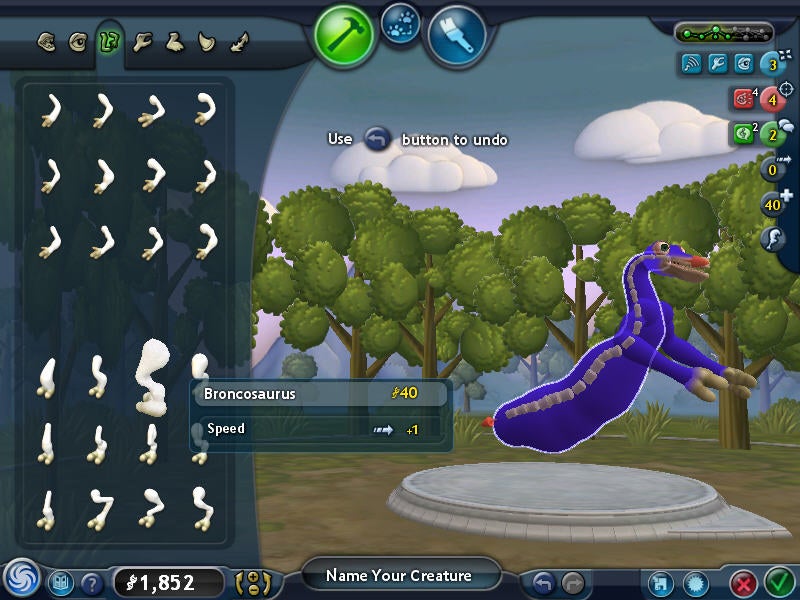 In Spore's Creture Creator, you drag and drop components to design characters that play in the game. spore
SHARE

Years in the making, Will Wright’s Spore peeks out today with the release of the Creature Creator. The free download is a toolkit for designing the life forms that will inhabit the Spore universe when the full game launches on September 7.

Every creature starts out the same-as a purplish blob floating in space. You click and drag with your mouse to make it longer or shorter and change the shape of its spine to give it, say, a curvy neck or an upturned tail. Spin the scroll wheel on your mouse to make sections of the body fatter or skinnier.

After that, it’s plug and play as you choose from, and attach, eyes, legs, arms, horns and adornments like pig tails or wings. Everything is morphable: You drag the components to make them longer or shorter, fatter or thinner, and you can change their position on the creature, so for example, it can walk more efficiently, or in a more comical way. After you have complete creature, you paint it in whatever crazy pattern catches you fancy.

Sharing is the best part. After you create, name and save your creature, it goes into the Sporepedia—a gallery of beings that will inhabit the Spore universe when the game launches. At that time, you will also be able to build cities, teraform planets, and design spaceships with as much creative freedom as you have with creatures.

But the sharing starts right now. Spore‘s Creature Creator allows you to capture photos of you darling and film it in action, then load it on to YouTube. Here is my child, Udoughoralli, in his first awkward movements, dancing and jumping around like a very nerdy, gawky teenager.

When the game itself launches, your task it to “evolve.” By befriending or killing other creatures, you gain points that allow you to acquire new skills and abilities. Choose wisely, because your actions set you down a certain path. If you gobble up everything on your planet, don’t expect to later evolve into a statesman. You’re programming yourself instead to be a warrior, and to progress on to cities, planets and solar systems populated by your warrior race.

Of course, if you don’t like how one of your creatures evolves, you can always make another, and another and another.