With no apparent negative effects 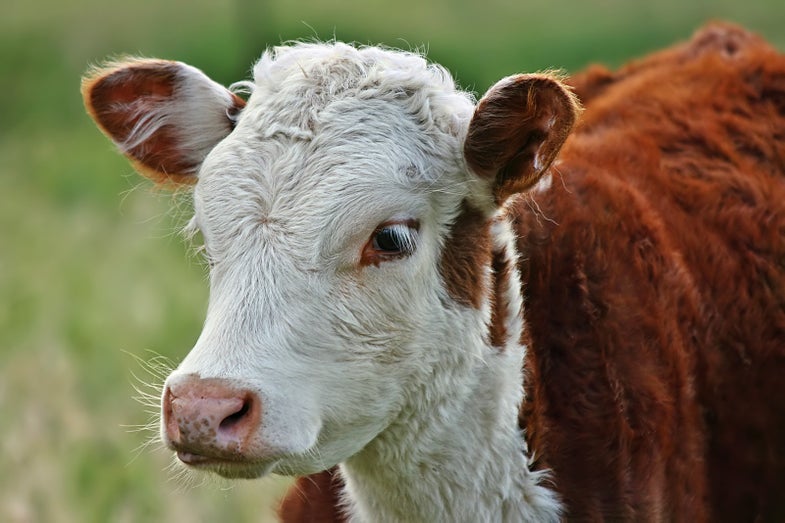 Cattle have now been made hornless through genetic editing, with no apparent side effects, researchers say.

In the United States, roughly 80 percent of all calves raised for dairy and 25 percent of beef cattle get their horns removed every year — that’s 4.8 million and 8.75 million head of cattle, respectively. Dehorning helps protect animals and their handlers from accidental injuries, but it’s not only costly, it’s painful to animals, and numerous animal advocacy groups have campaigned for either mandatory anesthesia during dehorning or a complete end to the practice. “Dehorning animals is a bloody and painful process that no one likes to do,” notes William Muir, a professor of genetics at Purdue University.

Naturally hornless cattle do exist, a trait known as “polled” that is common in beef breeds such as Angus but rare in dairy breeds such as Holstein. Farmers have tried using naturally polled Holstein sires to breed dairy cows, but the offspring don’t produce as much milk as their horned counterparts.

Naturally occurring mutations potentially linked to hornlessness arose 500 to 1,000 years ago. Now scientists have woven these genetic quirks into other cattle.

The researchers genetically tweaked clones they created of dairy cattle. Three calves were euthanized shortly after birth due to problems commonly associated with cloning techniques, but two other calves survived, males named Spotigy and Buri that are healthy and are now more than 10 months old.

Horn removal through gene editing is a win-win both for the animal and for the farmer, says Muir, who did not take part in this research. “These findings show that you can take highly desirable genes from animals and move them to other members of their species,” he told Popular Science. “One could achieve the same results with natural breeding, but gene editing greatly speeds up the process, reducing the time it takes to accomplish the goal from centuries to years.”

Transgenic animals receive genes from other species, but the sites where such transgenes get inserted are imprecise, and unintended consequences can occur if they get inserted in the wrong areas. This is why it takes so long for transgenic animals to make their way through the regulatory process, as authorities have to examine all the possible intended and unintended consequences of gene modification, Muir notes.

In contrast, these gene-edited calves are not transgenic animals. Instead, they received genes that naturally already exist in cattle. Furthermore, gene editing is much more precise than techniques used to create transgenic animals, “so you avoid collateral damage,” Muir told Popular Science. “Federal regulations are not yet clear on these gene-edited animals, but my hope is that regulatory approval is quick.”

Genetic editing may also lead to other animal improvements, such as resistance to various diseases, notes Willard Eyestone, a research associate professor of reproductive biology and biotechnology at Virginia Tech, who did not participate in this study. Other beneficial traits may include tailless pigs, Muir notes.

The scientists detailed their findings online May 6 in the journal Nature Biotechnology.