And One Olympic Pool sized Flag 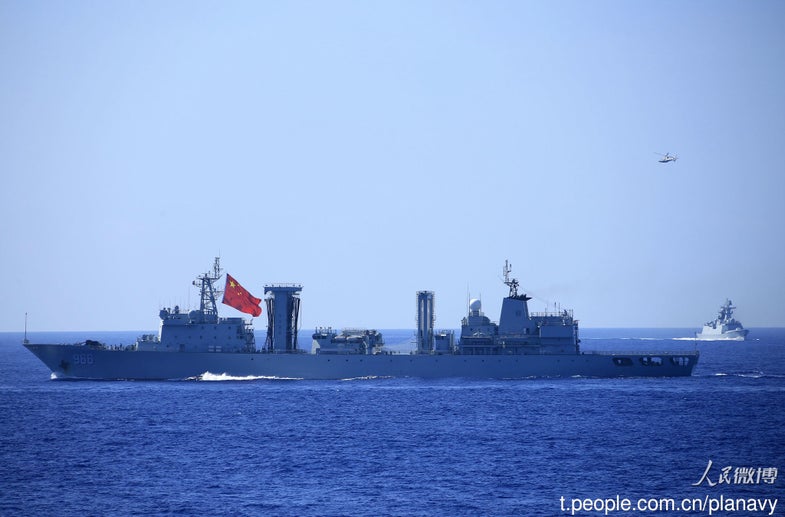 The Type 903A "966" Gaoyouhu replenishment ship is flying a Chinese flag with a surface area bigger than that of an Olympic sized swimming pool. During the 11 day voyage, the Gaoyouhu will refuel both the American and Chinese warships. People's Navy Online
SHARE 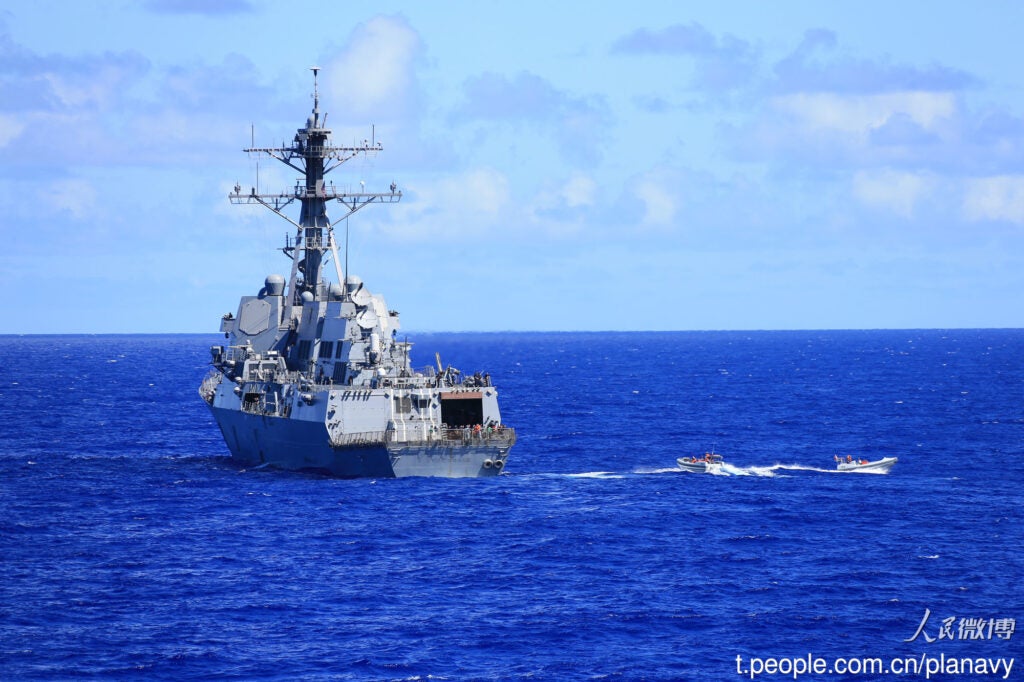 A group of PLAN officers (in the speed boats) sail over to get onboard the USS Stockdale, an Arleigh Burke class destroyer, to provide for taskforce coordination during the eleven day voyage.

Five Chinese warships, the PLAN’s delegation to RIMPAC 2016, rendezvoused with two USN destroyers, the USS Stockdale and USS Lawrence near the Daito Islands (just southeast of Okinawa), on June 18, 2016. The seven ship taskforce, with the USS Stockdale as flagship, will arrive at Hawaii for RIMPAC 2016 on June 29. Three other groups, one from Singapore, and the other two from San Diego, are also sailing to Hawaii (an amphibious component also takes place in Southern California). 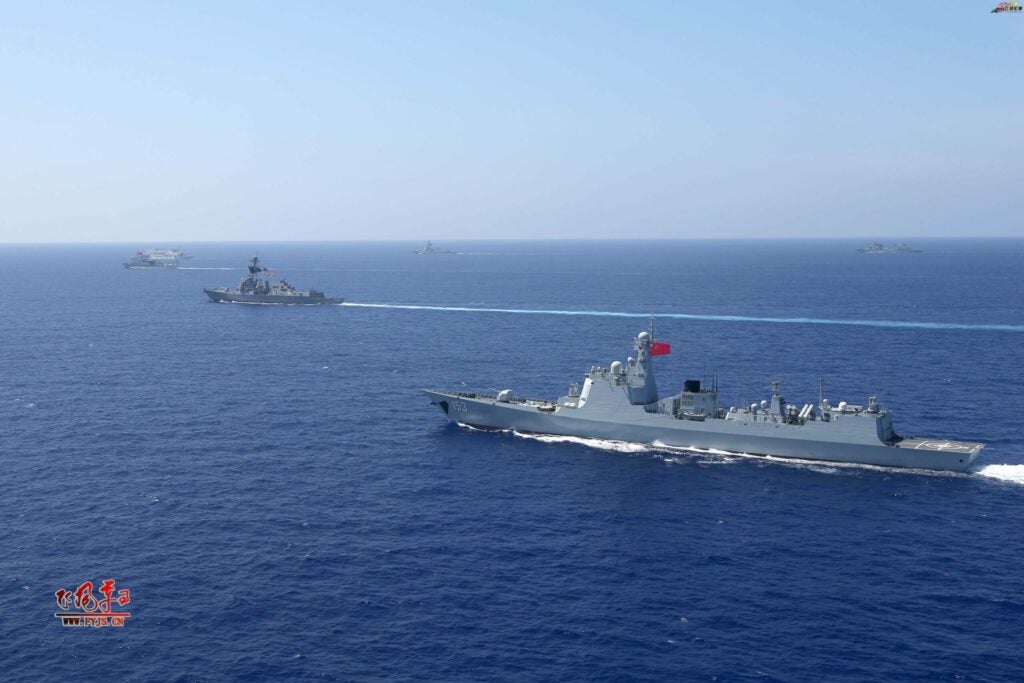 The ships seen are, from foreground to rear, as the CNS Xian, the USS Stockdale, CNS Changdao and CNS Peace Ark (a hospital ship).

Hosted biennially by the US, RIMPAC is the world’s largest regular multi-national exercise, incorporating dozens of countries each time (China’s first participation was in the previous RIMPAC, 2014). Running from June 30 to August 4, RIMPAC 2016 will involve twenty seven nations, fifty ships (including five submarines) over two hundred aircraft and 25,000 personnel. Noticeably, this is the first RIMPAC that will involve a submarine rescue exercise (of which China will play a key part in). 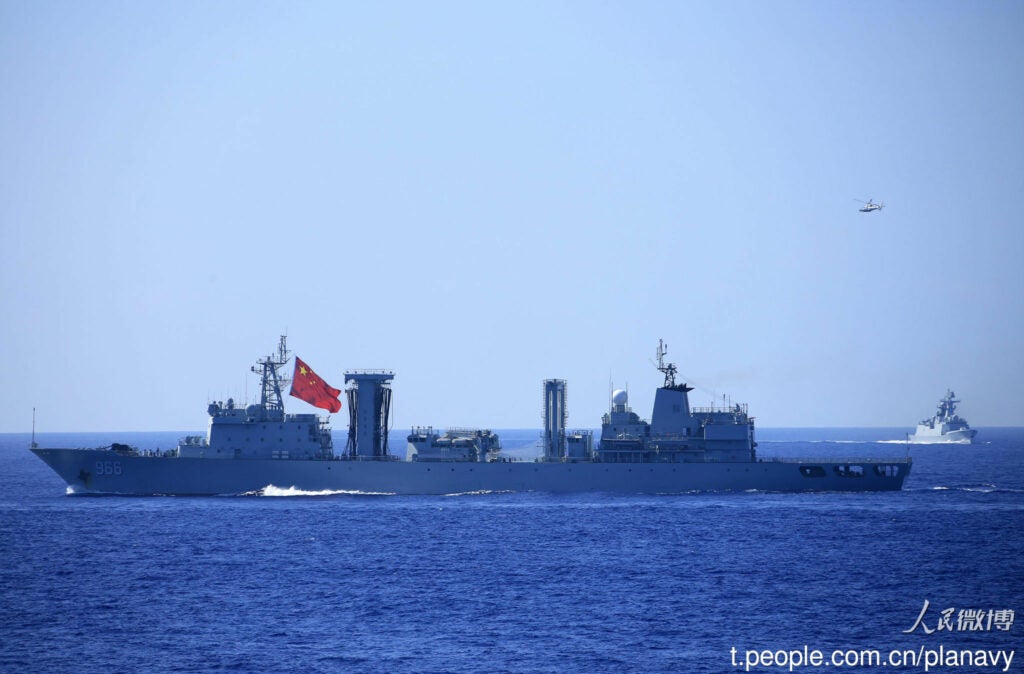 The Type 903A “966” Gaoyouhu replenishment ship is flying a Chinese flag with a surface area bigger than that of an Olympic sized swimming pool. During the 11 day voyage, the Gaoyouhu will refuel both the American and Chinese warships.

This year, the Chinese task force consists of the Type 052C class “153” Xian guided missile destroyer, the Type 054A “546” Hengshui guided missile frigate, Type 903A ” 966″ Gaoyouhu replenishment ship, the Peace Ark hospital ship and Type 926 submarine tender/rescue ship “867” Changdao. Additionally, there is one special forces team, one naval diving team and three helicopters with the Chinese contingent. Only the American and Canadian contingents will be larger. The task force left Zhoushan, Zhejiang on June 15, 2016. 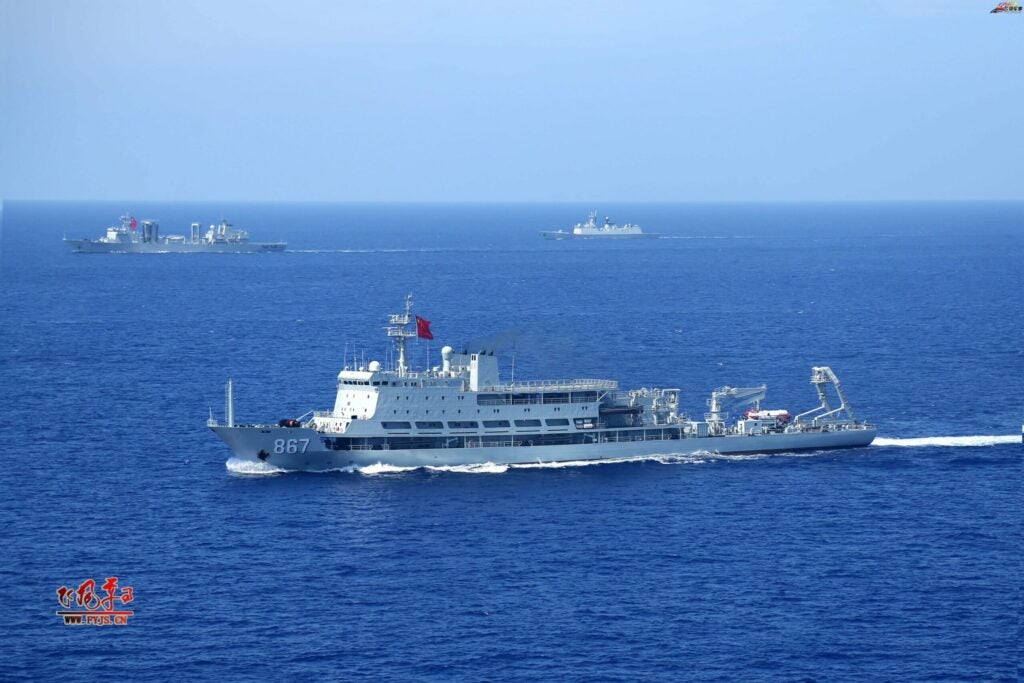 The Changdao (named for the county in Shandong Province) is a Type 926 9,500 ton ship that carries rescue chambers which can be lowered from the ship to a depth of 300 meters, and carry up 18 rescued crewers from damaged submarines and underwater wrecks. The Changdao may also be carrying the LR7, a British made deep sea submersible that can dive to 500 meters underwater and also rescue 18 persons.

China Military Online reported that the seven ship taskforce will conduct a series of exercises during the 11 day voyage, including communications, at sea resupply, aerial photography and live fire artillery exercises. This will be presursor to closer naval cooperation; the Changdao will be one of the stars of RIMPAC’s inaugural underwater rescue component. 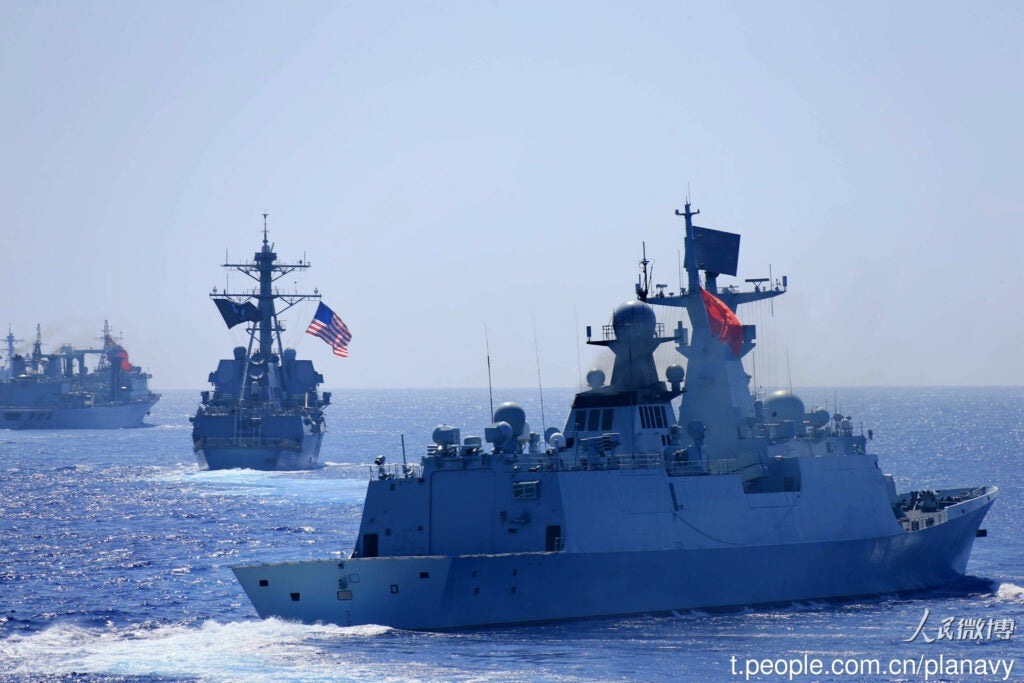 The Hengshui frigates sails behind an Arleigh Burke class destroyer and the Gaoyouhu supply ship, all on their way to Hawaii.

Check back in next month for more updates on RIMPAC 2016.