How Deep Learning Could Be The Next Step In Cancer Detection 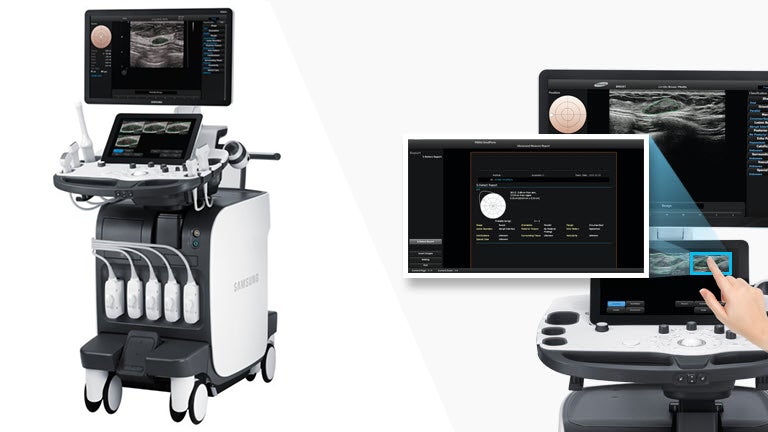 Artificial intelligence may be the new face of medical diagnostics. For the first time, a flavor of A.I. called deep learning is being implemented in new ultrasound imaging equipment to aid in breast exams and help patients avoid unnecessary biopsies.

A new feature in Samsung Medison’s ultrasound system uses a deep-learning algorithm to make recommendations about whether a breast abnormality is benign or cancerous. The “S-Detect for Breast” feature is now included in an upgrade to the company’s RS80A ultrasound system and is commercially available in parts of Europe, the Middle East and Korea and is pending FDA approval in the U.S., according to PR manager Doug Kim. Deep learning relies on large amounts of data to inform complex decision-making algorithms, has aided in everything from speech and image recognition software to pharmaceutical research.

Developers constructed the algorithm using approximately 9,000 images of breast lesions (the term for a mass or abnormality in the breast) from previous anonymous breast exams. Radiologists read each of the images, taking note of the lesion’s various characteristics like shape and orientation, said Wayne Spittle, executive vice president of Samsung Medison, in an interview with Popular Science. Additionally, all the lesions in the images were biopsied in to determine whether they were actually malignant.

“You need the actual diagnosis of each lesion so that you can actually make sure that the learning’s processing correctly,” Spittle said.

Based on this data, developers built the algorithm to correlate what lesion characteristics—shape, for example—are most associated with cancer. When the ultrasound device is used, the algorithm can be applied to an image of a breast lesion in real time and it can make a recommendation about whether a biopsy should be performed based on all the previously collected data.

“It looks at lesion shape, how dense, is it fluid or solid, does it have patterns within it—there’s a whole criteria set there that it looks at,” Spittle said. “The radiologist doing the exam actually freezes on the image that he wants to look at and then applies the learning algorithm.”

However, Samsung Medison has yet to release its research, which it claims details the accuracy the algorithm. When asked about accuracy, the company pointed towards the unpublished, unavailable paper.

The general idea, though, is to help medical professionals make more accurate recommendations in less time, helping them to catch malignant lesions and also allow patients to avoid unnecessary biopsies of abnormalities that turn out to benign—a procedure that’s typically very safe, but can be inconvenient and expensive.

Generally, ultrasound is considered the second line of defense when it comes to breast exams, according to Susan Harvey, the director of breast imaging at Johns Hopkins School of Medicine. In general, a mammogram is the first screening tool used. If an abnormality is detected, then ultrasound may be used for further evaluation.

During a typical ultrasound exam, the radiologist or professional reading the scan will manually examine lesions for a number of characteristics that can be used to make a decision about its likelihood of being malignant, said David Schacht, an assistant professor of radiology and breast imaging section chief at the University of Chicago’s radiology department. Liquid-filled cysts, for instance, typically don’t require biopsies, while solid masses represent a greater concern.

When looking at these solid masses, certain traits are likely to stand out.

Ultimately, the professional evaluates all of these characteristics together in order to make a recommendation about whether a biopsy should be done.

“But certainly many benign biopsies of solid masses occur for a number of reasons,” Schacht added. “Either the mass does not have every single one of the benign features that you’d want to see to just call it benign and not biopsy, or patient factors, such as high-risk status or patient concern can all affect that decision of whether or not a solid mass — even one highly unlikely to be cancer — does just get biopsied.”

According to standards in the U.S., Harvey pointed out, “if 25 to 35 percent of the lesions you biopsy are cancer, then you are performing at an adequate standard.”

So, typically, many more biopsies are conducted than actually indicate cancer. Of course, the risk of missing something cancerous is large, while the health risks associated with biopsies are minimal, Harvey noted. But there are also the costs of unnecessary biopsies to consider.

When it comes to the S-Detect for Breast, the algorithm is not designed to learn in real time — that is, it’s not collecting data from every new image it evaluates and using it to update itself. And, in any case, the algorithm can’t “learn” until a biopsy of any given image is conducted and the final diagnosis — cancerous or benign — is recorded. However, the developers can choose to update the program with more data at a later time and apply the updated algorithm to newer models of the ultrasound system.

Currently, no peer-reviewed research on the accuracy of the algorithm (as compared to traditional breast exams) has been published, although Kim noted that a paper, involving collaborators from the Samsung Medical Center in Seoul, South Korea, is in the works and will likely be published within the year. The company is also exploring the idea of a deep-learning algorithm for other types of ultrasound exams, such as thyroid imaging.

In the meantime, without having used this particular device, Schacht pointed out that the use of big data in diagnostics is “an important concept.”

“The use of computers and big data to learn and understand more about breast lesions that are seen on imaging has been an important part of breast imaging for decades, going back to the times where computer-aided detection really began in mammography,” he said. “I think there’s a long history of using data available on images within breast imaging to advance the field.”