Thanks to a remote-control human pilot 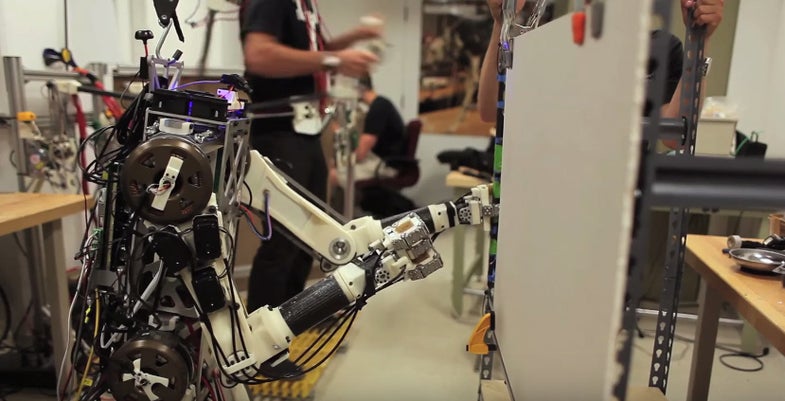 The world as made by humans is designed for bipedal bodies, ones capable of navigating the world while maintaining balance on two precarious legs and manipulating objects using a pair of arms. Sometimes, human-made spaces become hostile, but still need a human hand. This is the premise behind DARPA’s rescue robots challenge, where teams built human-shaped robots for such future emergencies like shutting off valves in broken and leaking nuclear reactors. HERMES, a new robot by researchers at MIT, is another solution to the same problem: a humanoid robot, steered by a human pilot strapped into a remote-control exoskeleton, with built in reflexes.

PhD candidate Joao Ramos describes it as “trying to put the human’s brain inside the robot.” But another way to think about it is like MechWarrior or Pacific Rim meets Reaper drones: pilots in one place, robots in the danger. The robot has two three-fingered hands, which can crush cans but also delicately pour coffee, like below:

The major innovation isn’t the hands, but the sensors. To make the robot more human-like, the robot’s sensors feed input back to the strapped-in pilot, who then corrects his position like a normal human would. The robot learns from these borrowed reflexes.

Controllers in the human pilot’s hands control the robot’s hands, and a camera on the head of the robot feeds video straight back to the pilot, so that person can see through the robot’s head as though she was there. Albert Wang, another PhD candidate working on HERMES, says that a future version of the robot would merge autonomous control with human intelligence. So in the future when you see a rescue robot punching through a wall, there might even be a human controlling it:

Watch a video about HERMES from MIT below: