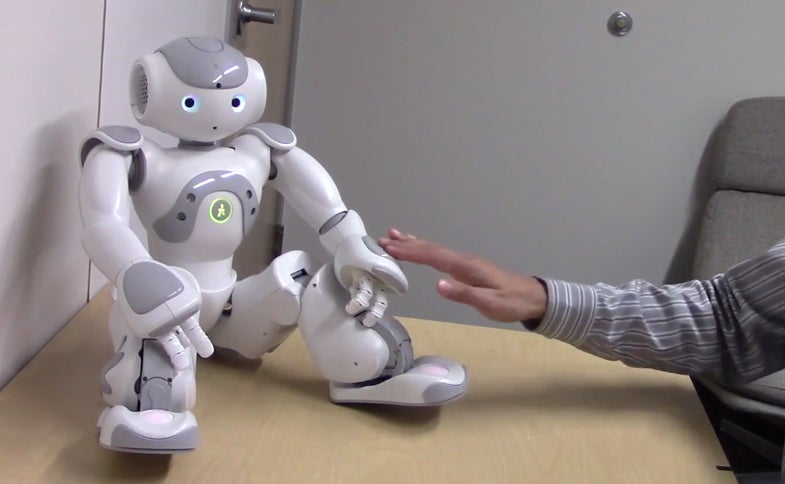 Robots can’t feel shame, which saves them from any awkwardness when they ask a human to touch their buttocks. Humans are not so lucky, and when asked by a robot to touch part of its body, humans will get uncomfortable if that body part is generally thought of as private. No problem at all touching a hand:

And here’s that same person touching the robot’s buttocks. Not visible, but physiological indicators reveal that this is a lot more uncomfortable for the human:

In a new study, Stanford researchers found that people get weirded out touching “low-accessible” parts of the robot’s body (crotch, butt, that sort of thing). The paper will be presented this week in Fukuoka, Japan, at the Annual Conference of the International Communication Association.

For the study, undergrads were placed alone in a room with a NAO robot. They put their non-dominant hand on a sensor that measured physiological factors like “attention, alertness, and awareness,” and not other sorts of arousal. Here’s how IEEE Spectrum explains what happened next:

As expected, the researchers found that touching this small, humanoid robot on its butt made people uncomfortable (pointing at the various parts showed none of the same indicators). This study didn’t venture a guess at why, exactly, that made people feel weird, but it’s safe to speculate that the humanoid form of the NAO robots was responsible for a large part of that. Robots shaped differently, like Roombas, quadcopters, or bomb squad robots would probably not cause the same kind of reaction … probably because they don’t have butts.

Future studies might try with different robot shapes, or they might track reaction over time. Maybe it’s weird the first time a robot asks someone to touch its butt, but by the tenth or so time, the human could get used to the action. Until then, we’ll sit perched on the edge of the Uncomfortable Valley, with shameless robots starting up at us, asking awkward questions.