Because of course they do 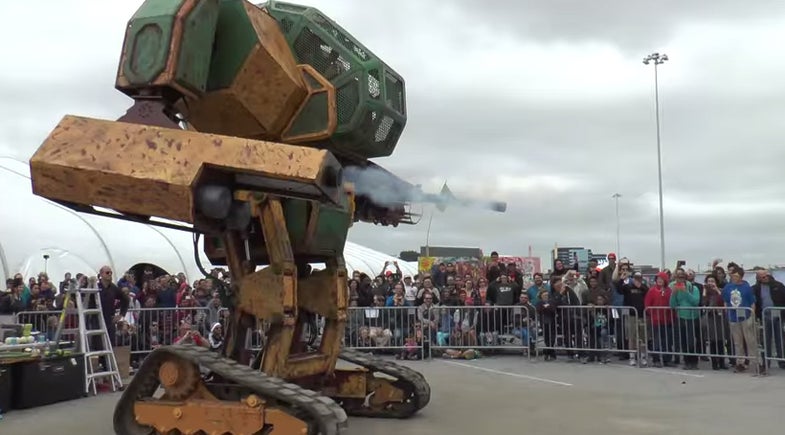 There are real, serious, military technology developments happening in the Pacific. This is not about that. This is about some dudes who built a giant robot for paintball battles because they could, and then challenged a giant Japanese robot to a giant robot duel. Giant robots.

Watch the challenge from the Megabot crew to Japan’s Suidobashi Heavy Industry:

Every part of this feels like a viral marketing campaign for, like, a Pacific Rim sequel. Despite an appearance at New York Comic-Con in 2014, is doesn’t appear that Megabot is marketing anything except the idea of modern, giant robot battles itself. They want to create a league for robot duels, but ones with a real sense of danger: humans control the machines from cockpits inside, rather than remotely piloting them from safety elsewhere. They are, in essence, real life mecha.

It’s an idea with mechanical legs, but perhaps limited ones. A Kickstarter campaign by MegaBots ended unsuccessfully last November, raising less than four percent of the $1.8 million project goal.

In the meantime it looks like the robot-makers are turning to hopes of an international exhibition match to jumpstart their battles. The above video is filled with footage of an apparently working Megabot, and it comes with Japanese subtitles, challenging Suidobashi Heavy Industry’s Kuratas robot to a duel to be held next year.

When it happens, we’ll see if the Megabot dream of pay-per-view robot battles is within each, or if they’re just hopelessly trying to punch above their weight.