Virtual reality does away with the interspecies size boundary. 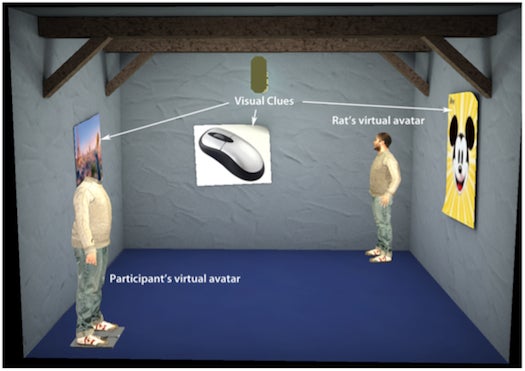 As much as humans like animals, we don’t really see them the same way as we see other humans. But a new study is asking, among other things: What if we didn’t know the difference?

In the metaphysical, Honey I Shrunk The Kids-style experiment, researchers suited up 18 test subjects with virtual reality helmets, landing them in a computer-generated room with posters on the walls. (As a cheeky aside, the posters had pictures of Mickey Mouse and a computer mouse.) Another pixely human avatar was in the room with them. The subjects were told they were going to a) be working with a human to solve tasks, or b) interacting with a rat controlling the other avatar. Regardless of what researchers told them, they were working with a rat in a box, kilometers away.

Meanwhile, every time the human subjects moved around the virtual room, a rat-sized robot with food attached to it moved in the rat’s box. In short, the humans and rats were interacting, but on each other’s scale. Researchers gave the humans tasks to complete, like moving together toward a poster on the wall, assigning points if they completed them.

Interestingly, it didn’t matter whether the humans knew their interlocutor was a rat or not; they continued to act the same way. The rats, for their part, didn’t change their behavior much, either.

The researchers are hoping research like this will improve telepresence technology, and give us a window into animal behavior.

[PLoS ONE via BBC]