Google Is Making It Easier For You To Prove Your Humanity

Their new CAPTCHA system is easier for people, harder for bots 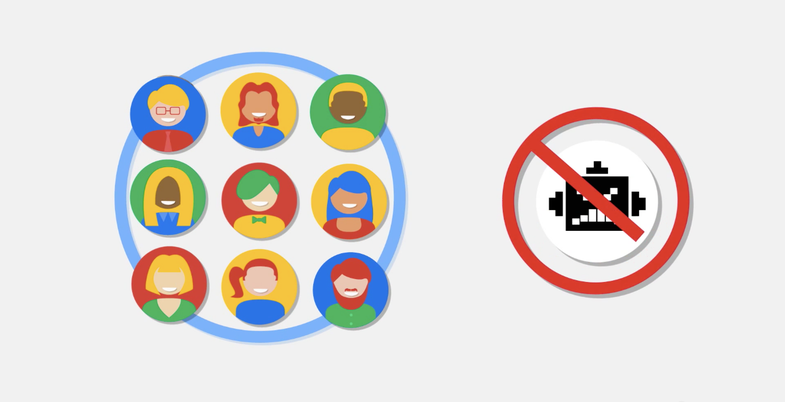 Among all the fun things we do on the web every day, trying to decrypt wildly distorted text to prove that we’re not robots isn’t one of them. Google feels the web’s pain and wants to make the process less annoying. On Wednesday it announced its latest attempt, dubbed “No CAPTCHA reCAPTCHA.” (Thankfully, it doesn’t require you to say that five times fast.)

The problem, as Google’s reCAPTCHA Product Manager Vinay Shet lays out in his blog post, is that computers have gotten much better at reading distorted text, which most CAPTCHAs use. This means sites have to make CAPTCHA text harder and harder for actual humans to read—so CAPTCHAs are failing us frequently in both ways.

The No CAPTCHA reCAPTCHA relies (mostly) on a simple checkbox reading “I am not a robot.” Users check that box and Google uses some very smart algorithms based around “advanced risk analysis,” specifically looking at what the putative person does before, during, and after interacting with the CAPTCHA. In this way, it can predict—with a high likelihood—whether or not you’re a person or a robot pretending to be a person. If you’re a person, it can serve up an easier CAPTCHA; if you’re simply a humble astromech droid, however, you’ll get a much harder one.

Now, the No CAPTCHA reCAPTCHA name is perhaps a slight misnomer. Google’s approach won’t get rid of CAPTCHAs; in some cases, it may not be able to tell if you’re a human or a bot—or may not have a high amount of confidence in its assessment. In those situations, it’ll provide additional checks, more in line with traditional CAPTCHAs.

Google also recognizes that more and more of us are interacting with the web on mobile devices, and so it’s also trying to provide versions of the traditional CAPTCHA that are friendlier to touchscreen devices. For example, it may show you a picture of a cat and a grid of other pictures and ask you to select all the other pictures of a cat. (This harnesses the difficult problem of “computer vision”—or, if you prefer the more colloquial name, “park or bird.”)

So far, the new No CAPTCHA reCAPTCHA is in use in a handful of sites, including Snapchat, WordPress, and Humble Bundle, but Google is also offering it for free to site administrators.

This is, of course, great news this holiday shopping season—unless you’re just a poor, harmless robot just trying to buy some presents for your fellow automata.