Can A Boulder Stop A Speeding Truck? A Forceful New Study Investigates In the video above, a truck smashes spectacularly into a boulder. For science. While it might seem like the kind of experiment only dreamed of by 10-year-old kids, the reasoning behind the crash is deadly serious.

The video is part of a study conducted at Penn State and published in the International Journal of Impact Engineering. Funded by the Department of State, the study’s object was to develop a quick and easy method of figuring out if a naturally occurring boulder can be used as a security barrier.

Though the researchers wouldn’t disclose the exact locations they were asked to simulate, the Department of State has plenty of overseas outposts that they would like to protect as efficiently as possible. And part of that efficiency is ensuring that they are making good use of the existing landscape.

“If you’re building something in a mountainous place where there are a lot of naturally occurring boulders that you have to move, you have to put them somewhere,” Alexander Allen Brown, one of the authors of the study, says. Instead of just getting rid of the giant rocks, or relying exclusively on man-made security barriers, both expensive and time consuming endeavors, the Department of State wanted to find out if they could use the natural boulders as a security barrier to prevent vehicles like trucks from crashing into buildings.

“It turns out that in order to have a boulder buried in sand and have it work it needs to be big. Really, really big.” Brown says. Brown, now at Lafayette College, worked with other researchers, including Mark Keske, Sean Brennan and Tong Qiu, a civil engineer at Penn State, to develop a computer model that can be used on a small computer in the field to assess whether a boulder can be used as protection. Previous models took hours or days to calculate an end result on a cluster of high-performance computers.

“For the Department of State, sometimes they just want to have a quick evaluation,” Qiu says in a statement. “They want to come up with things maybe on the fly, as a first approximation.”

The model developed at Penn State is ready for use in the field. State Department officials can look at a particular boulder, input its specs into a program, and within a few seconds receive information on how deep the boulder would have to be buried to stop a speeding truck, or whether it would be suitable at all. 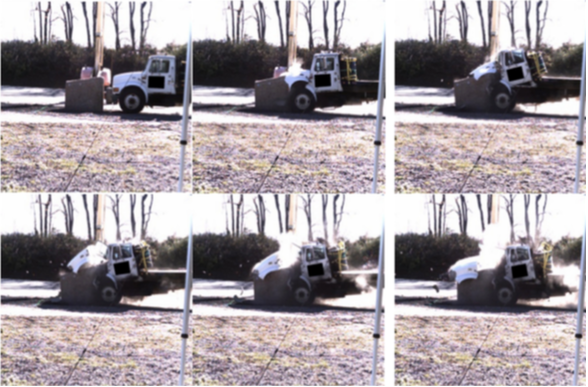 A crash test of a 15,000 pound truck slamming into a boulder at 30 miles per hour

“If you think of burying a truck in soil and then having it impacted with another truck, you would think it would stop it. but that’s not the case,” Brown says.

The researchers were asked to focus on granite boulders and cohesionless soils. Cohesionless soils are soils that behave like sand, gravel, or dry, loose dirt, as opposed to clays which tend to stick together more. To test their models, they took the largest boulder they could possibly install and installed it at the test track at Penn State’s Larson Transportation Institute. The boulder was about 11 feet tall and 60,000 pounds, but when it was rammed into by a 15,000 pound truck traveling 30 miles per hour, it still rotated.

The amount of movement of the boulder in the soil is one of the key factors determining if a boulder can stop a truck. If it rotates too much, then the truck can push the boulder out of the ground and keep on going, or even turn the boulder into a ramp, launching the truck over the boulder. Neither solution is ideal.

Luckily, in this case the model worked, and while the boulder moved on the test track, it was buried deeply enough that it was able to stop the truck.