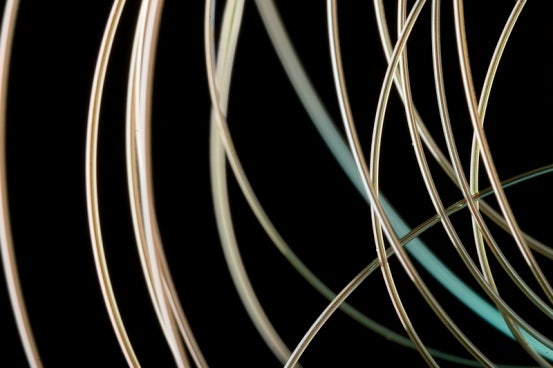 The trick to any good 3-D tech is creating a system in which the viewer’s eyes receive two slightly different images, creating the kind of dual perspective that gives imagery depth–and hence the illusion of three-dimensions even within a flat space like a television display. With most light emitters, which look the same when viewed from any angle, this can prove difficult. But a new kind of fiber developed at MIT that can emit light variably in different directions along its entire length can present light at different intensities to two different viewers, and it could lead to woven 3-D displays that project different visual information to a viewer’s left and right eyes.

The fiber has a hollow core surrounded by layers of materials with various optical properties. That hollow core contains a droplet of liquid that can be moved up and down the fiber, and when “pumped” with a laser this droplet emits light. That light bounces around in those layers of optical materials, emitting a 360-degree laser beam.

But that emitted beam itself is also manipulable. Surrounding the hollow core are channels filled with liquid crystals, each of which can alter the emitted light. That means the fiber can emit light of one brightness in one direction, and light of a completely different brightness in another direction.

Currently the number of liquid crystal channels in the fiber numbers only four, but the researchers say they can build as many of these light-manipulating channels as they want around the central core, making for extremely nuanced control of the light being emitted in different directions. All that, and the fiber still remains around 400 micrometers across, or a few times larger than a human hair.

In experiments, the researchers are investigating whether or not they can create a single thin, transparent display that projects identical images to viewers on opposite sides (rather than the mirror images normally projected light would produce–imagine the view from different sides of a suspended sheet upon which an image is projected). But the grander idea suggests that displays woven from the fiber could manipulate the light so carefully that a single person’s two eyes receive slightly different visual data, and thus create 3-D depth without glasses.