Inside the Brand-New High-Tech Rainbow Warrior

Greenpeace's new ship, built to order, is ready to sail 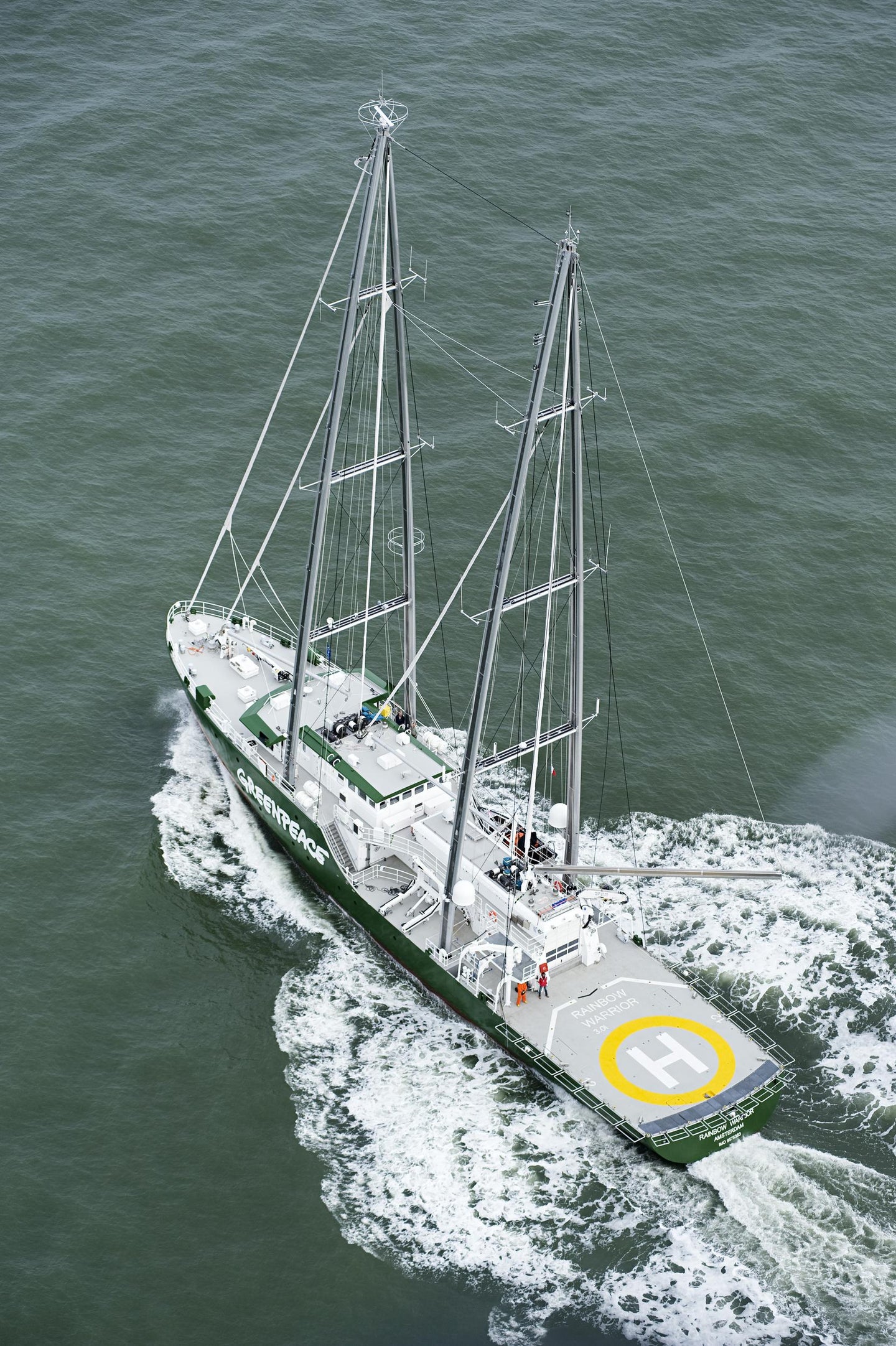 The triangular shape of the two A-frame masts, built by Rondal, make for strong, light structures that can manage the four giant sails without adding too much weight to the ship. The design also keeps the deck clear of rigging, which provides space for the helicopter pad. Oliver Tjaden/Greenpeace
SHARE

Greenpeace’s fleet of campaign ships has gained a member: the new and improved Rainbow Warrior. Hippie name aside, the boat is pretty darn cool, with unusual A-frame masts that reach 177 feet (nearly the length of the ship) and sails that measure 13,520 square feet. With this setup, the Rainbow Warrior can reach speeds of 14 knots, or around 16 mph.

The 190-foot yacht is the third of its name, and the first built specifically for the environmental group. Greenpeace launched the first Rainbow Warrior, a converted fishery research vessel, in 1978. That boat met a violent end seven years later when French foreign intelligence agents bombed it in Auckland, New Zealand’s harbor, killing a Greenpeace photographer. The second Rainbow Warrior, a converted trawler, launched in 1989. It retired last August after 22 years in service.

The new $32-million ship was funded entirely by private donations from some 100,000 supporters. According to Greenpeace, it is one of the greenest ships of its class, relying primarily on wind power.

Greenpeace will use the ship to carry out campaigns against what the organization calls environmental crimes, like whaling and shipping timber from rainforests. Greenpeace will also use the ship—as well as its two existing ships, which are both icebreakers—to give free rides to scientists conducing climate-related research (Greenpeace has no editorial control over the work). The Rainbow Warrior can carry nearly nine tons of scientific equipment.

In late January, the ship finished its 18-day cross-Atlantic maiden voyage from Europe, where it was built, arriving in New York City for a series of educational pit stops. Today, it’s in Baltimore. After that, it’s headed to North Carolina and Florida. And then, the ship and crew will embark on their first mission together: a campaign against climate change in the Brazilian Amazon. 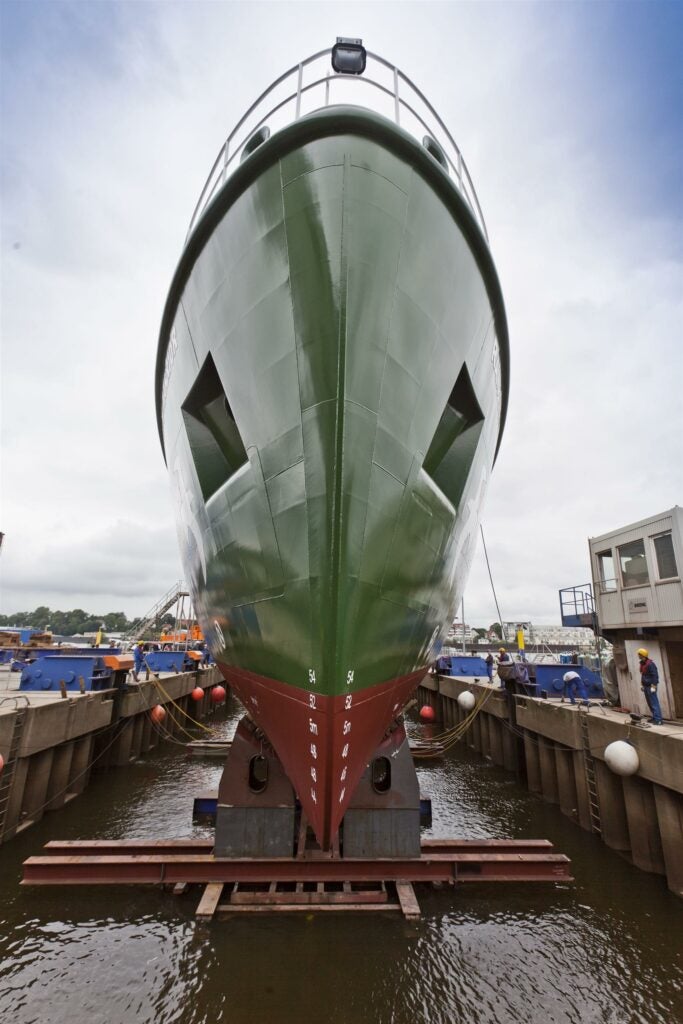 The Rainbow Warrior’s sleek hull helps it maneuver quickly, as well as reach sail speeds of 14 knots. Here, the ship sits in a German shipyard awaiting its masts and other accoutrements. 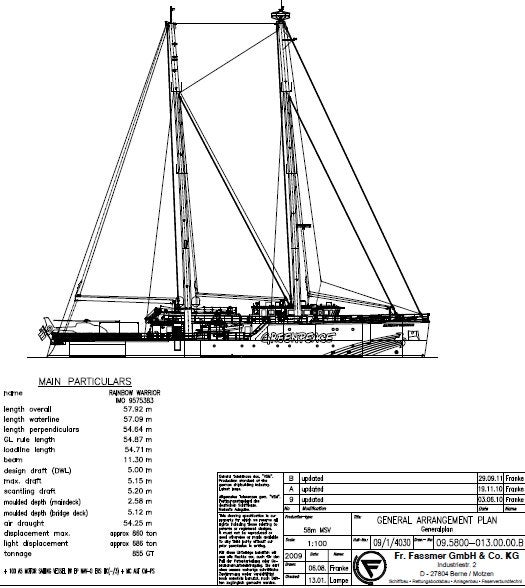 The Rainbow Warrior’s general plan, drawn in 2009. Design and planning took over a year. Once the ship’s construction began, it took around six months to finish. 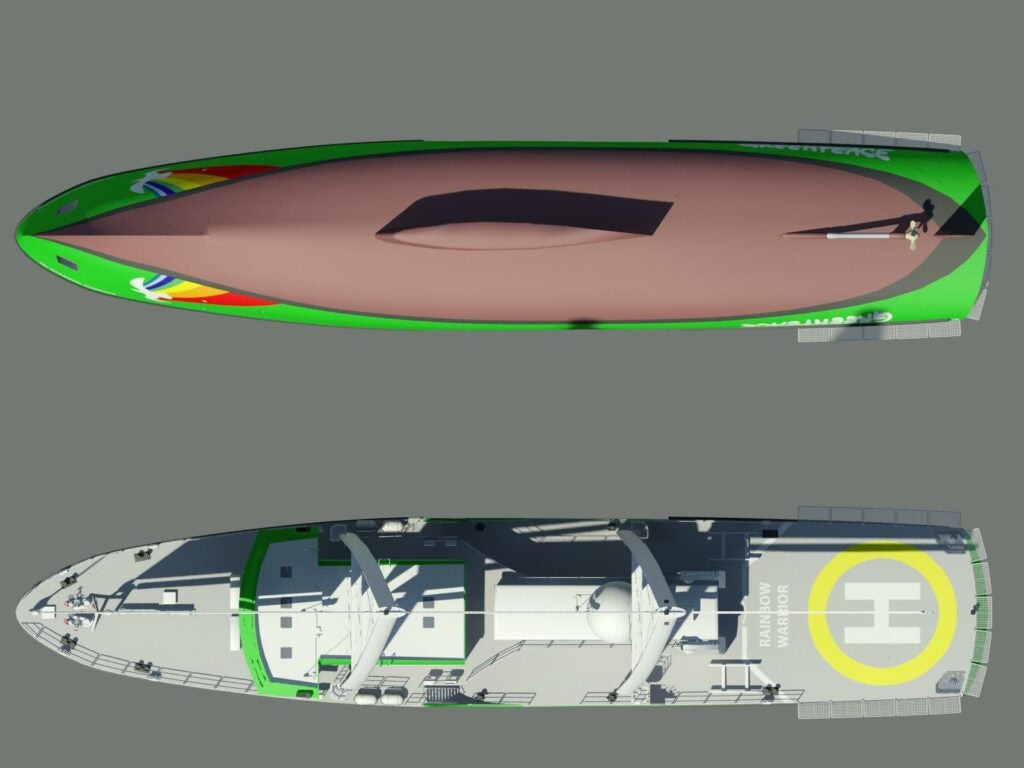 Overhead and bottom view of the Rainbow Warrior, pre-construction. 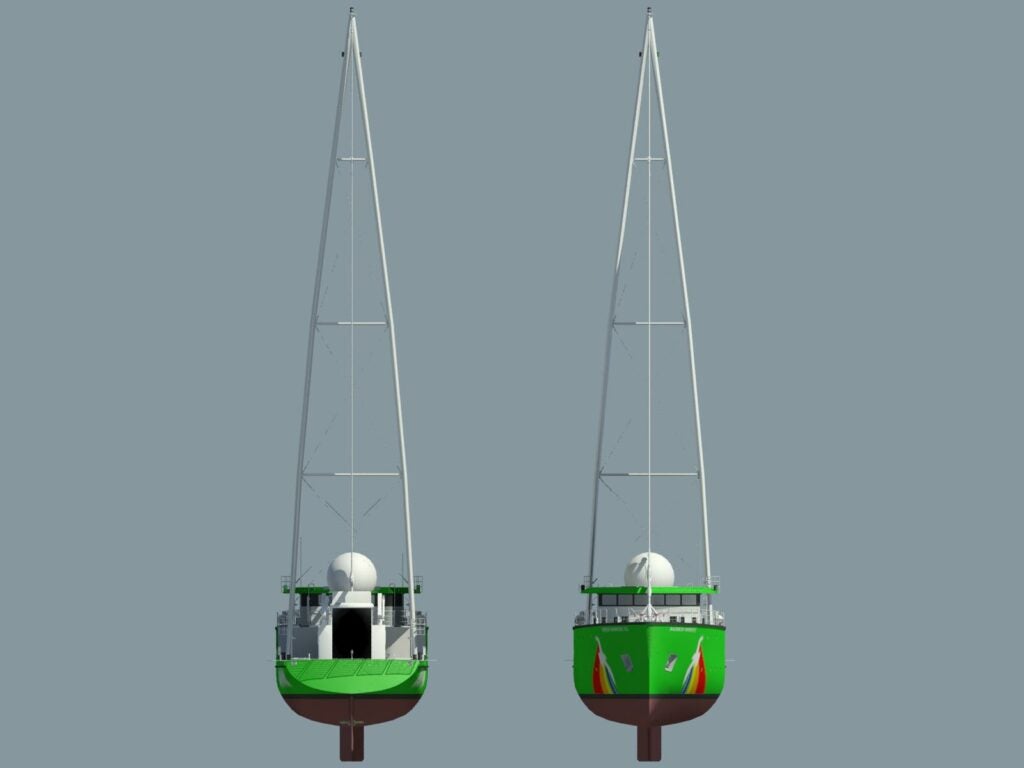 Prow and stern views of the Rainbow Warrior, pre-construction. The twin masts are 177 feet tall, nearly the same length as the ship. 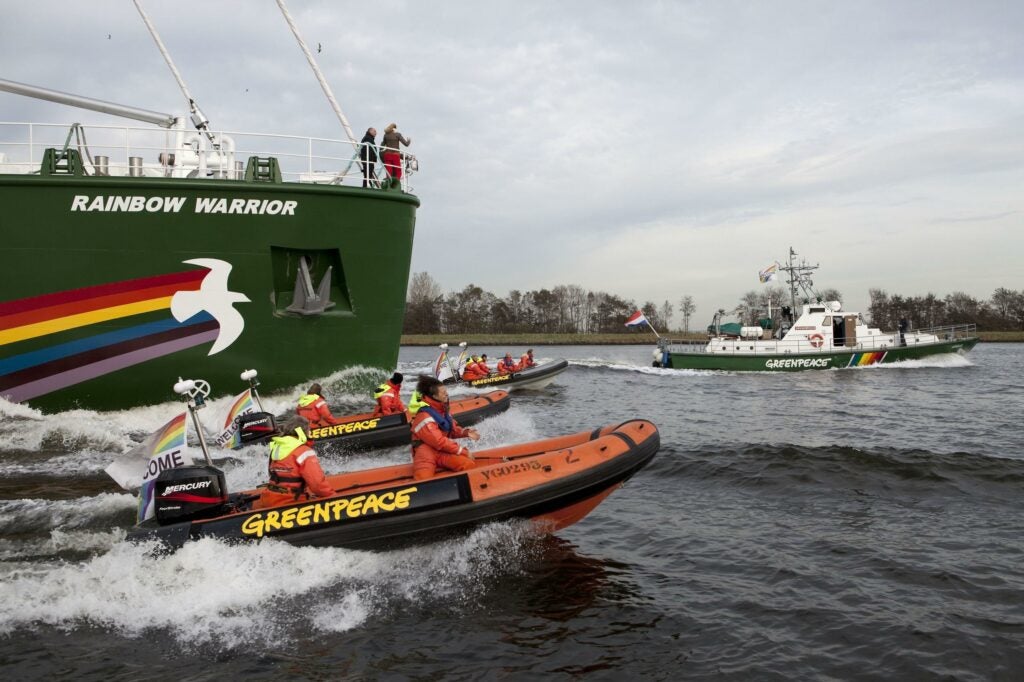 The Rainbow Warrior is outfitted with two Zodiacs, which purpose-built cranes can lift into the water within five minutes (even in 11-foot waves). 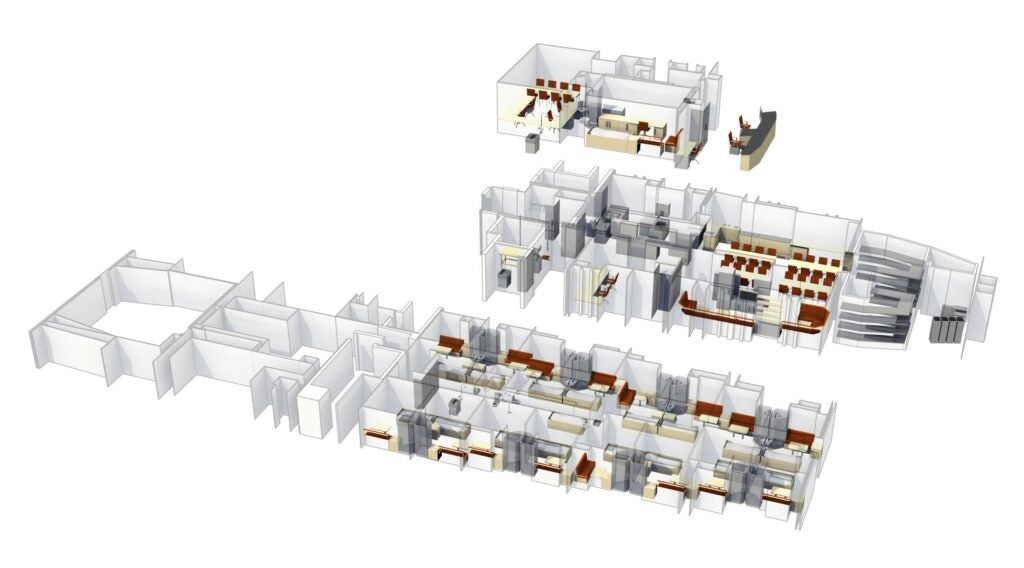 The Rainbow Warrior’s interior. The top deck includes the captain’s cabin, the bridge and a small workstation. The middle deck holds the kitchen and mess hall, a lounge and the communications center/radio room. On the lower deck are the crew’s cabins, complete with private showers, and the engine room. The ship can carry a crew of 32. 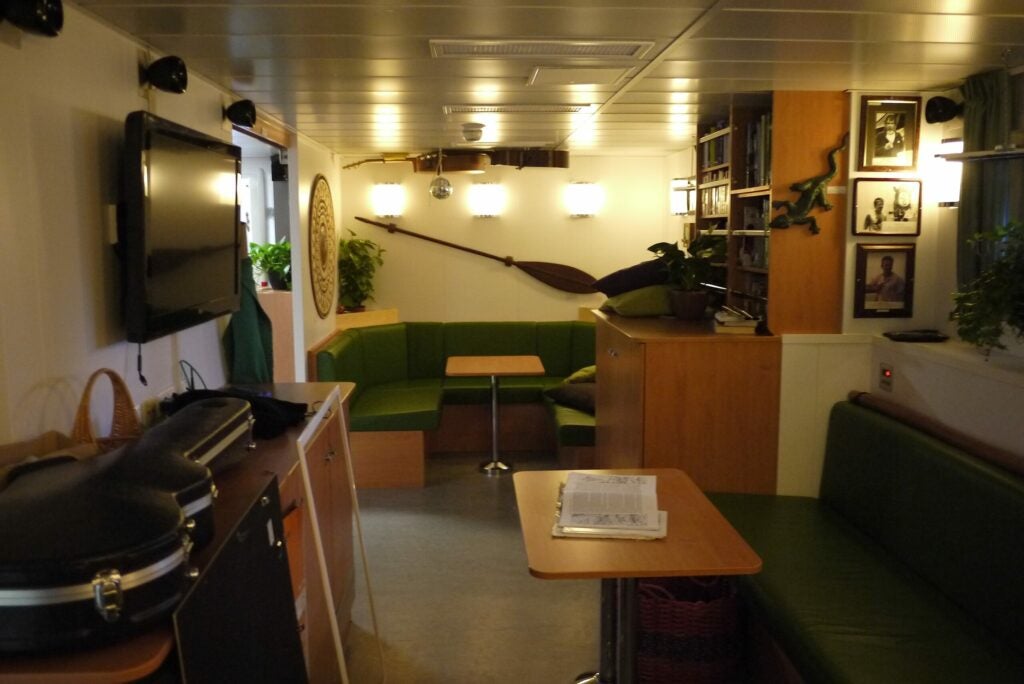 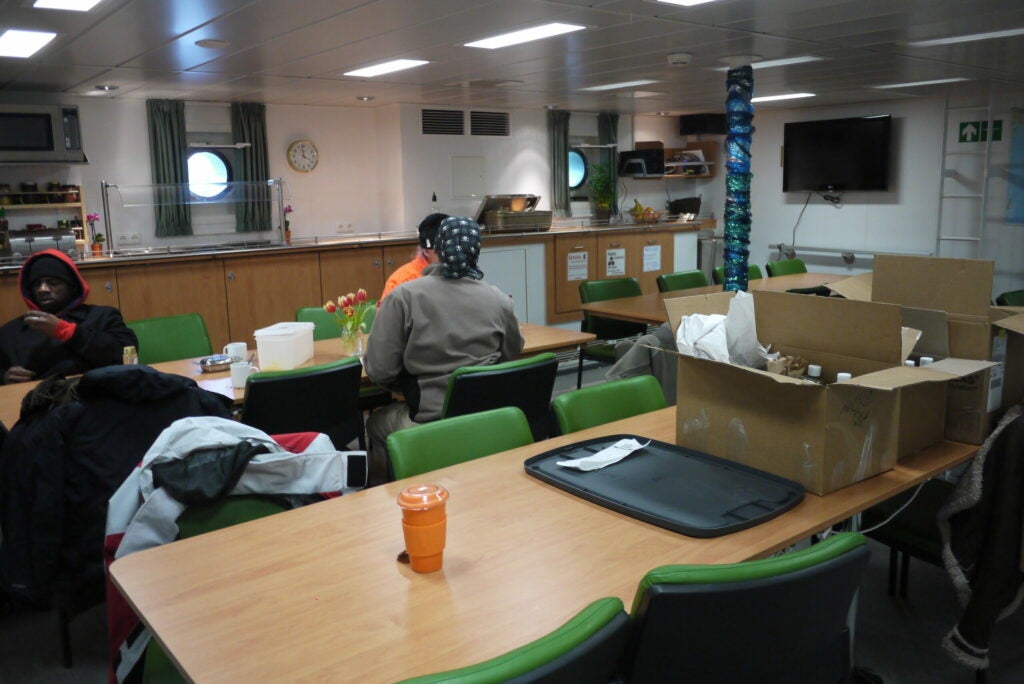 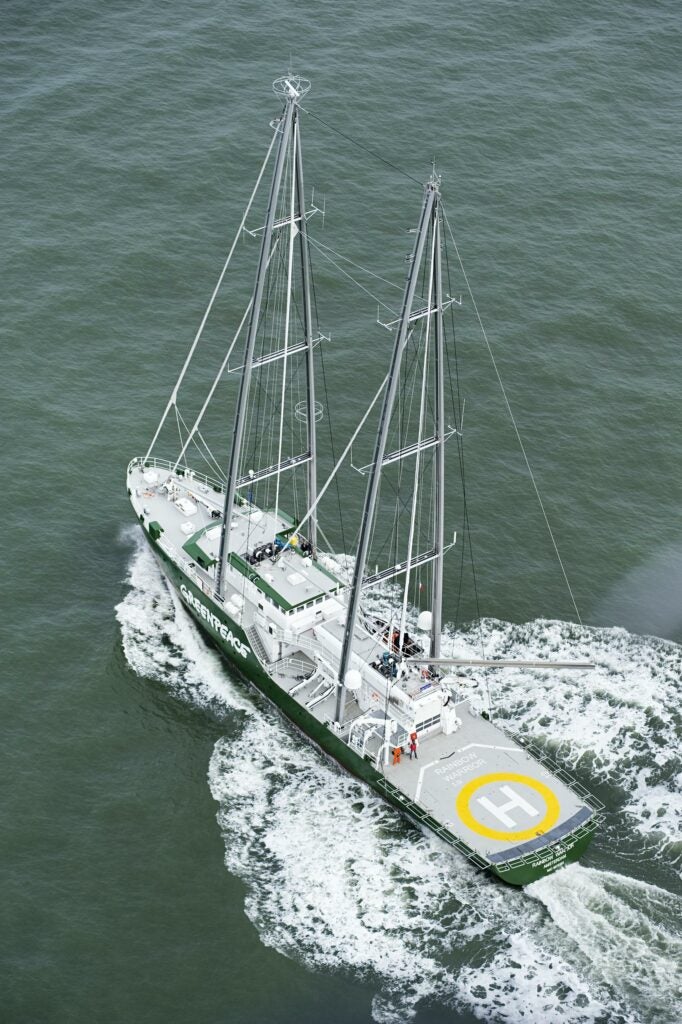 The triangular shape of the two A-frame masts, built by Rondal, make for strong, light structures that can manage the four giant sails without adding too much weight to the ship. The design also keeps the deck clear of rigging, which provides space for the helicopter pad. 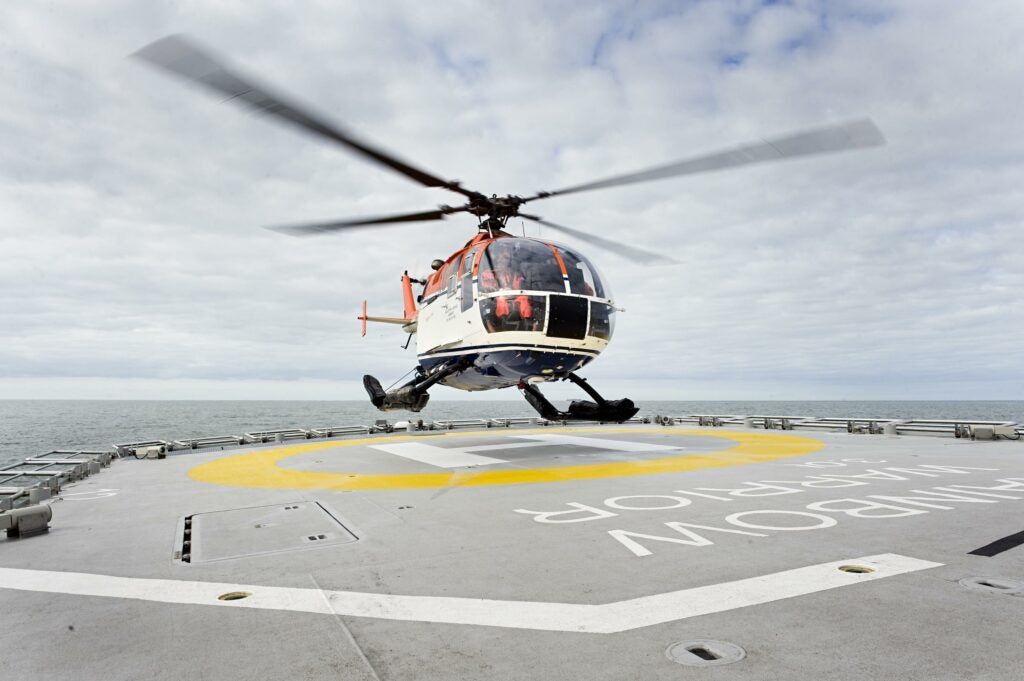 Despite the ship’s slim profile, it has enough space for a helicopter pad–an unusual addition for any sailboat. Here, a copter lands during sea trials in the North Sea. 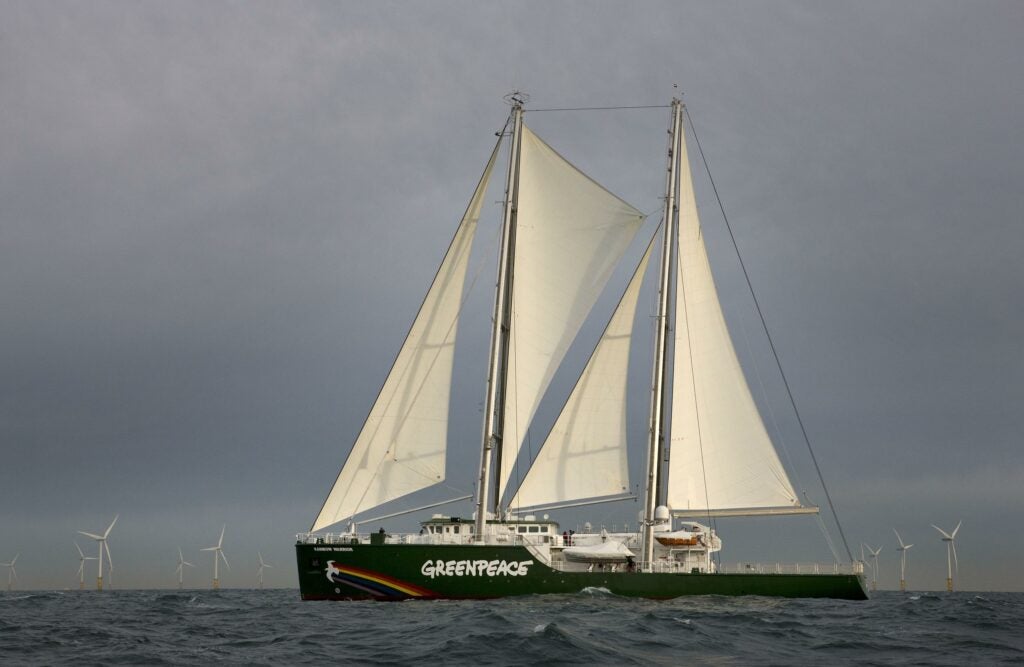 The Rainbow Warrior’s 13,520-square-foot sails take it to speeds of 14 knots, or 16 miles an hour–pretty fast for a 190-foot yacht. Greenpeace estimates that the sails will power the ship around 90 percent of the time at sea. 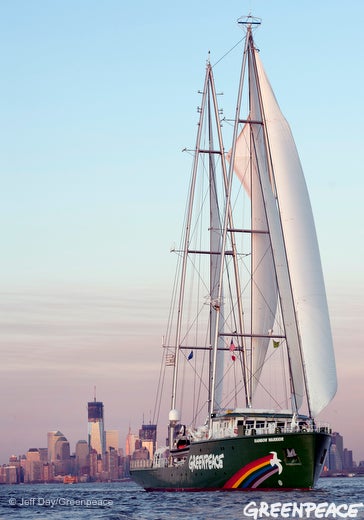 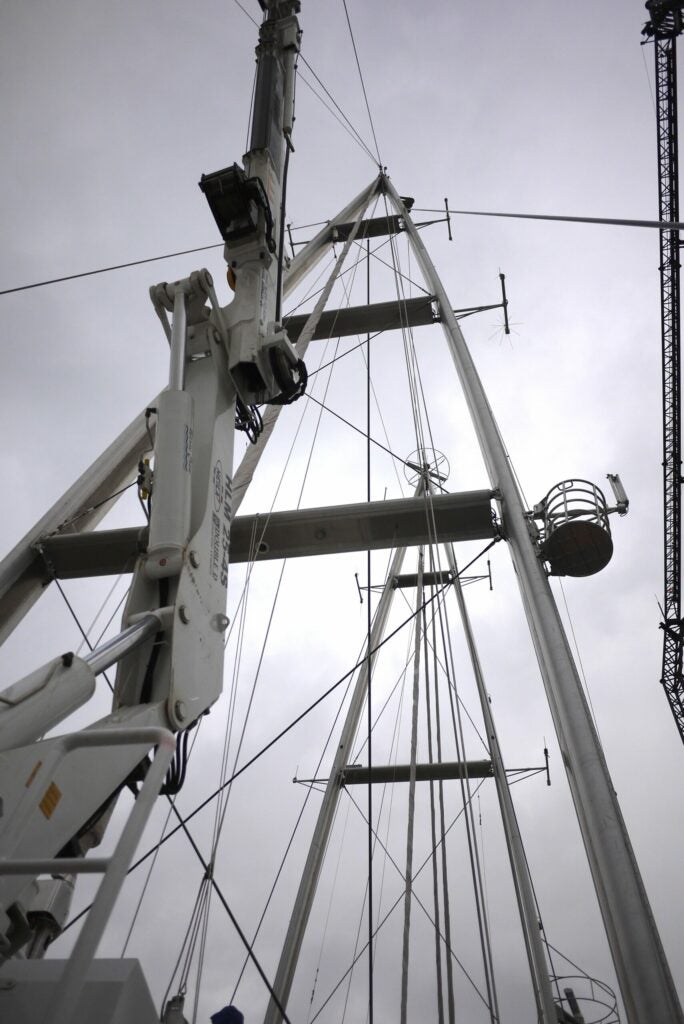 Inside the masts are miles of communication wires. The masts are also studded with 48 gadgets, including antennae, domes and lights. The vertical rectangular appendage on the right hand side of this photo is a Wi-Fi antenna, which essentially turns the Rainbow Warrior into a Wi-Fi hotspot. Photographers and scientists aboard the zodiacs can beam pictures, video and data back to the ship. Or activists can stream live footage of a whaling ship to the Rainbow Warrior, which can then send it to global media through a 24-hour satellite communications system. The group expects the Wi-Fi will work at distances of 12 miles or so, although they’ve yet to test it in the field. 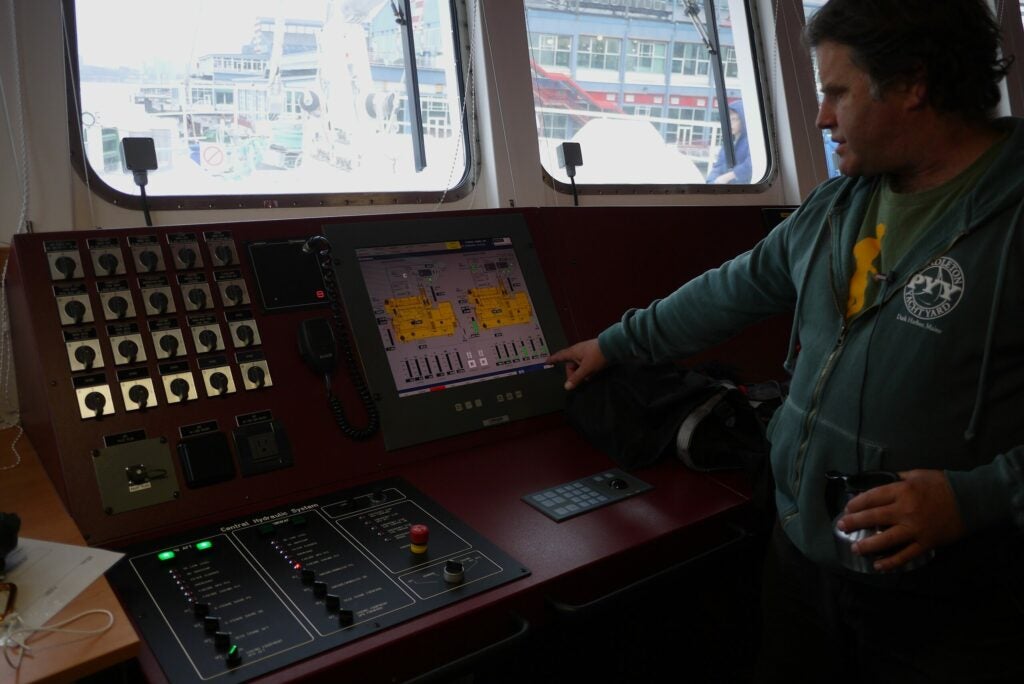 Captain on the Bridge

The Rainbow Warrior’s captain of over 30 years, Peter Willcox, shows off the bridge. The computer screen shows the status of the ship’s engine and generators. 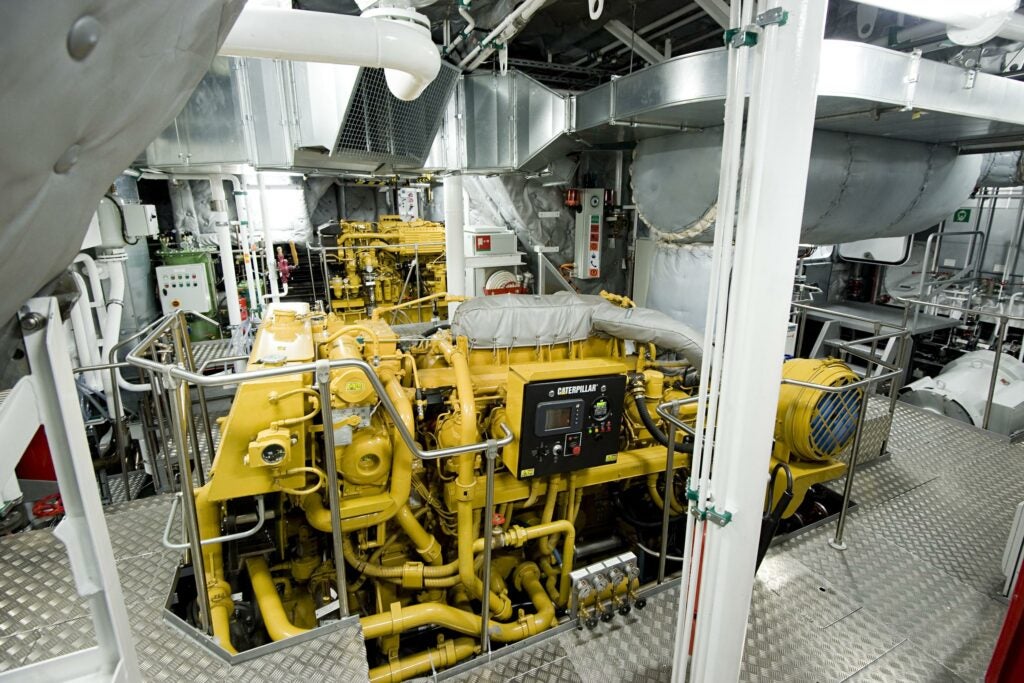 The Rainbow Warrior’s engine room. When there is no wind, the diesel engine can bring the ship up to 15 knots. Recycled heat from the engine and generators (not pictured) heat the cabins. 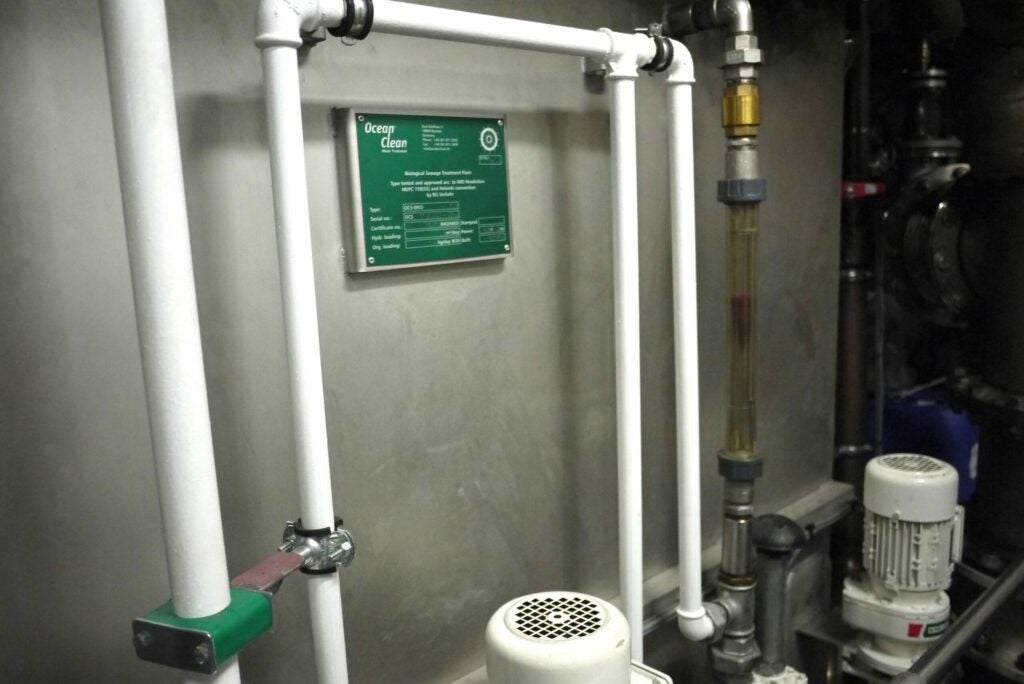 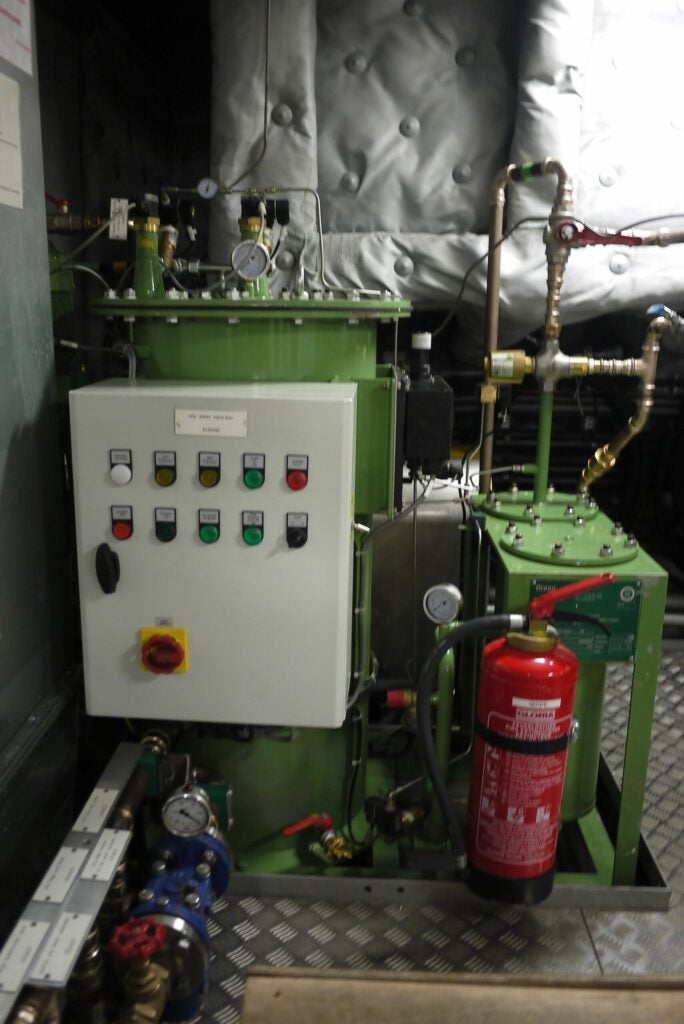 The bilge water treatment system in the ship’s engine room helps clean oils from the engines from the bilgewater that sloshes into the boat.
Engineering