The best weather for hitting a home run, according to scientists

Factors like temperature and humidity have a real impact on your ability to hit a homer. 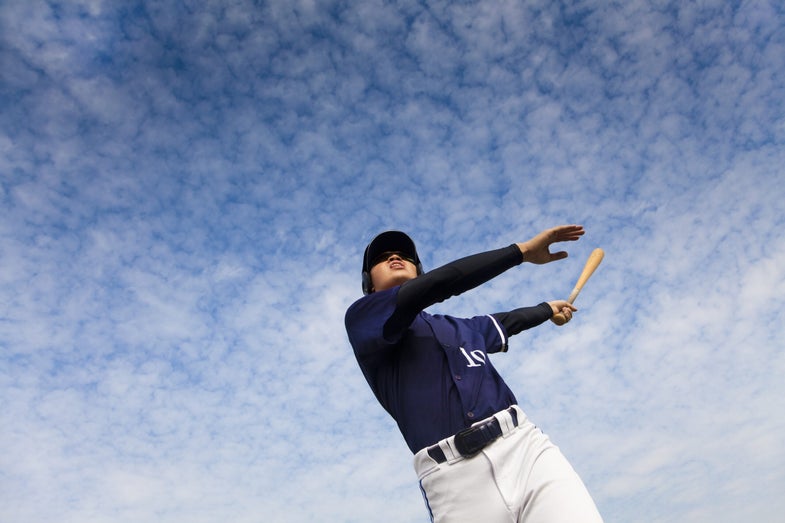 Baseball season kicks off this month, which will hopefully coincide with fewer soul-crushing blizzards and more warm, sunny days to spend in your stadium of choice. Nothing compliments a hot day quite like a bag of peanuts, the sweet crack of the bat, and, if you’re a Cubs fan like me, a Chicago-style hot dog at Wrigley.

Aside from fans’ moods, baseballs themselves get a summer boost, too; it turns out they generally travel farther in warmer weather. A ball’s trajectory is affected by other atmospheric conditions, too, including humidity, altitude, barometric pressure, and wind speed.

Those five factors can affect whether a ball is a dinger or a dud. Here’s how.

It might seem like baseballs would have an easier time zipping through dry air. But in reality, hitters should have better luck batting balls in sweaty Miami than in arid Phoenix.

The reason has to do with the weight of gaseous molecules in the air. As air becomes more humid, it holds more water molecules. That gaseous water vapor is really light, and it displaces heavier gases like nitrogen and oxygen.

“By kicking out those heavy gases, the air density goes down,” says Terry Bahill, a professor emeritus of engineering at the University of Arizona. Air density is a measure of molecules in a given amount of space; Bahill says it’s a way of saying how heavy the air is. “If air has higher density, it’s harder for the ball to go through it,” he says. “There’s more drag.”

Humid conditions only nudge the ball a few inches farther in the air, but they can have indirect effects, too. The yarn inside of a baseball can hold water pretty easily, so when stored in hyper-humid environments, they get heavier and much less bouncy. The Colorado Rockies purposefully store their balls in such an environment—in something called a humidor—to quell the sky-high number of home runs hit at Coors Field.

The reason Denver’s Coors Field has so many home runs, experts think, is because of altitude.

“Denver is a mile high, and the other stadiums are basically at sea-level,” says Alan Nathan, a professor emeritus of physics at the University of Illinois. “That plays a huge role—Coors is known to be a hitter’s paradise and a pitcher’s nightmare because balls carry so well.”

This again has to do with air density. Sections of air closer to sea-level get squished down by the weight of gases in the atmosphere above. That usually means air is more dense at sea-level, and less dense the higher up you go. Think about mountain-climbers who encounter the challenges of thinning air as they ascend—that’s air with very low density and pressure.

So in Denver, hitters love swinging for the fences because lucky physics keep their balls in the air much longer. In fact, pitchers at Coors tallied an average ERA (that’s earned run average, or how many runs they let up) of 6.50 between 1995 and 2001, more than two runs higher than in other MLB stadiums, according to previous Popular Science reporting. When the Rockies implemented their humidor in 2002 to mitigate fly-ball distance, the average ERA fell by about one run.

The air’s temperature, too, plays a role in density. In a heat wave, gases expand and spread out more, making air less dense. Air shrinks in the cold—shrinkage!—and packs more molecules together, making it more dense.

This is why we see a lot of home runs at Globe Life Park in Arlington, Texas in sweltering summer temperatures, says Nathan, who has actually used home run and temperature data to create a model showing just how much farther balls fly in the heat.

“For a ball hit at the typical home run speed and trajectory, a 10 degree [Fahrenheit] change in temperature is worth about a little over three feet in distance,” he says. “It might not seem like very much, but over the course of a whole season, it actually starts to add up.”

He compares the stadium in Arlington, Texas to AT&T Park in San Francisco, which commonly have a 40 degree difference in temperature. At three feet per 10 degrees, “that’s getting to be a big number, like a 12 or 13 foot difference between stadiums simply due to temperature.”

“Wind plays an enormous role. A five mile an hour wind that’s blowing out will increase the carry of a fly-ball by like 18 or 20 feet,” Nathan says, adding that windy conditions aren’t uncommon at Wrigley Field in Chicago. “Thats huge. Five miles per hour is not even a stiff breeze, really.”

So, according to physics, the best climate for a home run is hot, humid, high-altitude, and with a steady breeze toward the back fence. But the regions where those conditions exist could shift with climate change.

“To really know the answer to how climate change is going to influence baseball, you need to look at changes on a case by case and regional basis,” says Penn State climatologist Michael Mann. “As you warm up the planet, you increase the overall humidity in the atmosphere, but that varies dramatically from region to region. Some get drier, some get more moist.”

And while temperature increases are expected across the board in the next few decades, Mann says he expects cities in higher latitudes to warm up more than others. That could mean more home runs in the stadiums located in Seattle, San Francisco, Toronto, and Boston, the home of his favorite team, the Red Sox.

“Maybe as Boston warms up, we’ll see more home runs hit at Fenway Park,” says Mann. “That could be good, as far as I’m concerned.”