Emojis are symbols, not images in a textbook. 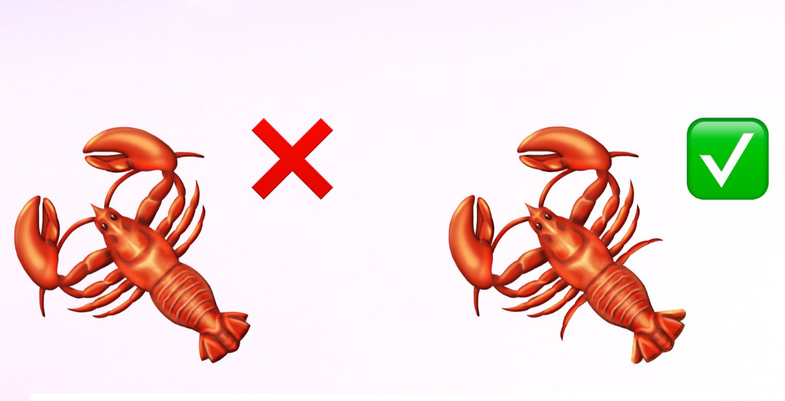 Counting the appendages with claws on them, lobsters have 10 legs. Image via Emojipedia
SHARE

Sometime later this year, 157 new emojis will grace your phone or computer, and one of them will be a lobster. That tiny little image could tell someone you’ve got a hankering for steamed crustaceans, that you’re wicked sunburned, or that you’re being boiled alive (ouch). The news made a U.S. senator happy: Angus King—he represents Maine, naturally—had officially asked the Unicode Consortium (more on them in a bit) for the lobster pictogram. But when a website called Emojipedia published a mock-up of what the shellfish would look like, there was a problem: It was short two legs.

That lack of legs caused “outrage,” according to the Portland Press Herald, who admittedly may have been using that word playfully. But impassioned lobster-lovers (check out this proposal for the emoji’s inclusion to get a buttery taste of their fervor) definitely noticed the incorrect leg count.

The #lobsteremoji is happening! Hopefully the final version will have the right number of legs. https://t.co/EIJMn8RP6a// pic.twitter.com/6aExqb1VIY

And so, on Monday, Emojipedia copped to making “some mistakes” and announced it was adding the requisite legs to the arthropod emoji, bringing its appendage total up to the proper 10. The website also updated its vision of the skateboard emoji to make it more modern, and corrected the direction that the twisted-ladder shape of DNA was turning.

But the great lobster-leg debate is very silly, for several reasons. First, Emojipedia doesn’t dictate how the final emoji will look. That honor goes to the tech companies, like Apple and Google, that implement the cartoony characters on their devices. The Unicode Consortium, a non-profit industry collaborative, fields proposals from people requesting new emojis, decides which get to become emojis, and then ensures that the new pictograms translate across platforms—so the heart you send someone from your iPhone shows up correctly on your friend’s Android device.

Second, to demand that our emojis are precise, accurate representations of the objects they depict is asking too much of little pictures. Consider that the poop emoji doesn’t look like actual poop; an airplane emoji on the iPhone shows a craft with four engines, while two-engine passenger planes are more common; we have a unicorn emoji, but unicorns do not exist; and the eggplant emoji is wildly popular—and not because people love how accurately it depicts the vegetable.

Great news for Maine – we're getting a lobster emoji!!! Thanks to @unicode for recognizing the impact of this critical crustacean, in Maine and across the country.

To be sure, the emoji “does need to look like the thing,” says Tyler Schnoebelen, a product manager at Integrate.ai who has researched emoticons and emojis. A dog emoji should look like a dog, regardless of the platform. It’s also interesting to note that even an emoji that literally looks like what it is can have different connotations depending on how it is drawn. Some animal emojis are cute (like a pig’s face, which a fun one to use after you’ve eaten your heart out on lobster), but others are side views, and just show what an animal looks like. In other words, even if an emoji is recognizable as the thing that it is symbolizing, the way it is designed matters.

The larger point is that we should consider the ways emojis work as metaphors. An emoji’s non-literal use matters, according to Schnoebelen. The Unicode subcommittee that focuses on emojis gives “extra points for something that can be used metaphorically,” he says. For example: A shark emoji doesn’t just represent a water predator, it can also symbolize aggressiveness, or a lawyer, he points out. And an unicorn emoji is fairly ridiculous if you think of it as a representation of something that doesn’t exist, but it does do a rather nice job symbolizing rarity and magic.

A cultural favorite among these double meanings: the fact that the peach emoji also looks like a butt, Schnoebelen says. It’s a good example of an emoji’s power not stemming only from the fact that it literally looks exactly like the real-world thing. “If [an emoji] looks precisely like the object and nothing else, you lose some of the fun and creativity of the symbolism,” he says.

Of course, one person’s metaphor is another’s natural resource, and the debate partially boils down (haha, joke’s on you, lobsters) to who is sending the emoji, and in what context. Emojis are used across different communities, and the number of legs on a lobster will matter more to some than others. Lily Chumley, an assistant professor of media, culture, and communication at New York University, points out that an emoji is “centralized in its design, but is highly diversified in its context of use.” Everyone using iPhones will see the same lobster emoji, but different communities will care more about its authenticity than others. A Mainer may count the legs, but a sunburned Midwesterner may not care. (While we’re on the subject, the octopus emoji on the iPhone appears to have only four appendages.)

Ultimately, asking whether or not an emoji is accurate may not be the best question, Chumley says, because “any image is always only a partial resemblance.” A more important consideration may be thinking about the different ways it could be used, and how its design helps facilitate that. Maybe we should be asking: “What can you do with a cute lobster [emoji] versus an ugly lobster?” she wonders.