Why the idea isn't as crazy as it sounds 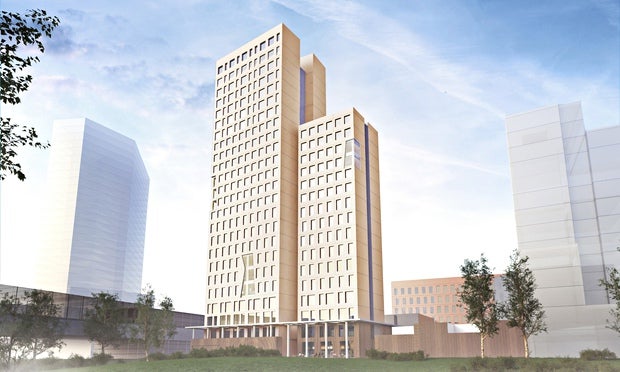 Next year in Vienna, architects will start working on a 275-foot-tall building made almost entirely out of wood. The Guardian reports that the approximately 25-story building will cost 60 million Euros ($67 million) and will save 2,800 tons of carbon emissions compared to building a similar structure made of concrete.

Wooden skyscrapers are a fast-growing trend among eco-minded architects who point to the environmental benefits of building with wood. Stockholm plans to build a 34-story wooden apartment building by 2023, and others are in the works from Europe to Australia. Unlike concrete’s production process, which emits large quantities of carbon dioxide, trees take in carbon dioxide as they grow. Their wood acts as a storage device for this carbon, with each cubic meter of wood storing about one ton of carbon dioxide every year.

But in the glass-and-steel world we live in, the idea of wooden skyscrapers is a tough one to swallow at first. Here are some answers to some of the most common questions about wooden skyscrapers. (For an even more in-depth look, check out Clay Risen’s March 2014 Popular Science article on the topic.)

Q: Will it catch on fire?

Fire is a huge concern for any tall building. Just last month, a dramatic fire at the unfortunately named Torch skyscraper in Dubai sent residents fleeing and bits of the building crashing into the streets. But experts like Michael Ramage at the University of Cambridge have said before that wood can do better than steel in really big fires–the outside of huge timbers might blacken, but remain intact. Still, fire officials in Vienna are reportedly working with the architects on the plans for the new wooden building, making sure it will be up to code.

Q: Will it be strong enough?

In a 2013 TED Talk architect Michael Green introduced the idea of wooden skyscrapers to a larger audience, and just last year, Green’s firm completed the construction of the Wood Innovation and Design Center at the University of Northern British Columbia. The building, at 90 feet tall, is the tallest wood building in North America. It uses massive timber boards that have been shaped and pressed together with specially engineered glue to make them stronger, more uniform and more durable. Architects are working to see how much taller wooden skyscrapers can go. According to a report from architecture firm Skidmore, Owings & Merrill, a 42-story wooden building is “technically feasible.”

People have used wood to construct buildings for a long time, and though they face considerable obstacles (fire, termites, rot, etc.), wood can actually last for a ridiculously long time if cared for properly. The oldest wooden building in the world, the Horyu-ji temple in Japan, was built in 607 AD, and is not only still standing, but still in use, even after numerous earthquakes over the centuries.