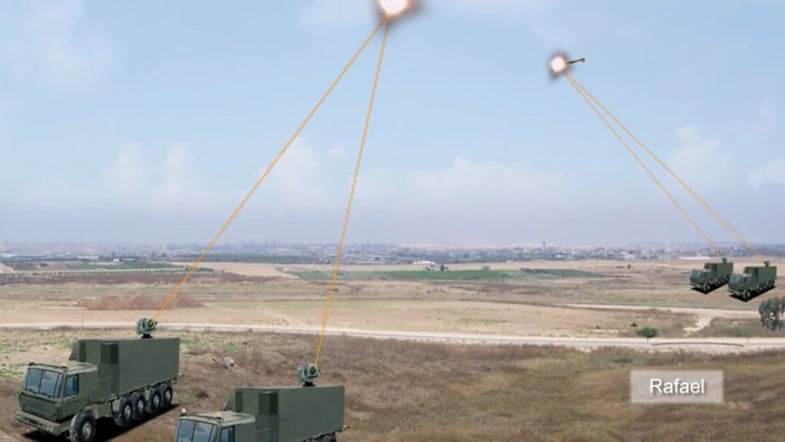 At a South Korean defense technology expo earlier this week, Israel’s defense manufacturer Rafael showed off its Iron Beam anti-drone laser system. While not yet deployed, the system is likely to become a standard feature of defenses in years to come, as technologically advanced militaries look for cheap ways to destroy drones and incoming rockets. If Iron Beam becomes widely adopted, it’ll be a sign that lasers are the best defense against drones.

There are four basic ways to stop a hostile drone. The first is destroying it with missiles or bullets. The second is simply catching them with nets, perhaps even nets carried by other drones (as in this South Korean example) . A third option is jamming the drones’ communication signals, and relying on its programming to send it straight to the ground. Finally, there are lasers.

Laser weapons work by burning a hole through a drone, either disabling its computery guts or making it crash because there’s a hole in its wing and it can’t keep flying. Lasers are tricky because they take a lot of power, and the beam has to stay focused on the drone long enough to burn through, so they also require sophisticated targeting cameras and software. That’s a lot of hurdles to overcome, but the end result is a weapon that’s fast and very, very cheap on a per-shot basis.

Rafael’s Iron Beam comes in two variants. One is designed to destroy rockets and mortar shells, stopping the small and cheap explosives before they land and cause damage. Another is designed to take out drones. The company says it’s been very successful in tests, but hasn’t revealed more information that that.

The range on these systems is just over 1 and a quarter miles, and they use radar to track targets first before switching to thermal cameras. The Iron Beam system fits in a shipping crate and can be used in place or mounted on the back of a truck. Because it’s a laser weapon, it can keep shooting for as long as it has electrical power. That makes it an ideal defense against low-tech attacks, because while the system itself is expensive, per use it’s likely cheaper than the weapons it is destroying.

Here’s a concept video of the system: