The iPad’s Closed System: Sometimes I Hate Being Right

Remember that groundbreaking Apple Super Bowl ad from 1984? The one where the woman throws a hammer at Big Brother,... 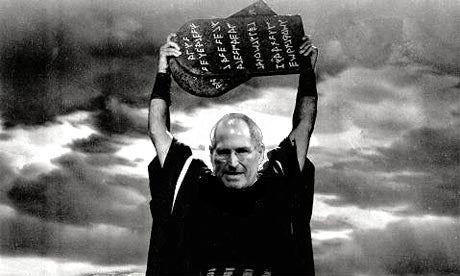 Remember that groundbreaking Apple Super Bowl ad from 1984? The one where the woman throws a hammer at Big Brother, signifying a new era of freedom that would be ushered in with Macintosh? My, how times have changed. Here we are more than 25 years later and the despotic, all-knowing face up there on that giant screen now belongs to Steve Jobs—and Big Brother Steve is holding an iPad.

Six months ago, I warned of the dystopian future that could be kicked off by the then rumored Apple tablet, and now my biggest fears are being realized. Please don’t underestimate the gravity of the situation. The unveiling of the Apple iPad could be the opening phase in a transition that could change the face of personal computing as we know it.

Now, before I go any further, let me say this: After my last post about the Apple tablet, I was accused of being a Windows sympathizer who’d never used a Mac. Some even suggested that I was on Microsoft’s payroll. In reality, I’m a fairly die-hard Mac fan. In my opinion, no one makes a better computer or operating system. I love Macintosh—I just don’t love Apple.

My problem with the iPad isn’t the lack of a camera, OLED screen or Flash (although that kind of sucks). It isn’t even the terrible name—hey, we eventually warmed up to “Wii,” didn’t we? No, it’s the fact that Apple is using the iPad to push its locked-down, heavily restrictive iPhone OS. Ask yourself why the iPad isn’t running OS X. Yes, performance is certainly a factor. After all, it’s easier to say you’re faster and better than a netbook when you only allow the user to perform one task at a time. But the real reason is that OS X is too open. You can download and install any program you want. You can watch TV shows and movies from a variety or sources. You can purchase and listen to music however you prefer. Heck, you can poke around a file system. But you can’t do any of this on the iPhone OS, and thus the iPad.

You can do on the iPad only what Apple allows. And if you are allowed to do something, you have to go through iTunes or MobileMe to do it. Apple makes a nice chunk of change on everything you do, but more importantly it gets to play gatekeeper. In OS X, Apple can’t block you from using apps it doesn’t like or competes with. But it famously blocks you from doing so on the iPhone and now presumably on the iPad, which is connected to the same App Store. How long before it blocks movies, TV shows, songs, books and even web sites? Scoff now, but don’t be so naïve as to believe that this isn’t possible.

So, the iPhone OS has made the leap onto a device that is much more computer-like. You’re no longer just using it to communicate or be entertained—you’re now using it to write documents, prepare presentations and do other tasks traditionally performed on a computer. And this is where things get dangerous. The iPad is not a personal computer in the sense that we currently understand. Once we replace the personal computer with a closed-platform device such as the iPad, we replace freedom, choice and the free market with oppression, censorship and monopoly. Imagine what life would be like if your personal computer functioned like the iPhone. You’d have to buy all your programs through Apple, and if Apple didn’t want you using something like, say, Google Voice, Abobe Flash or Microsoft Word, then you’d be out of luck. Oh, and multitasking would be a thing of the past. Sounds great, doesn’t it?

I’m scared that Apple is grooming iPhone OS as the eventual successor to OS X, at least for the significant portion of Apple customers who use their machines for basic tasks like Web surfing, email and the like. I think it would make the swap today if it thought it could get away with it. Instead, though, Apple is cleverly getting us trained on its closed platform little by little. First on the phone, then on our personal media players and now on a tablet.

App Store proponents will proffer certain rebuttals, sure, and some of them are not without their merits–like the fact that software developers are more likely to be compensated for their work in the App Store than in the freeware-heavy OS X software market, or that a more casual computing device designed like the iPad is served just fine by the App Store’s needs and would be overly complex running OS X. But it’s hard to argue with the merits of an open system vs. one that’s closed, especially when the Web is involved.

I like being right as much as the next guy, but I don’t want to be right about this. Twenty years from now, I don’t want to look back and say, “I told you so.” I don’t want to bore children with wild tales of the old days when we had things like file systems and we could run two programs at once. So let’s be careful with the iPad. Don’t trash your laptops for one just yet.