The iPod Touch, despite its immense popularity, has always been a sort of little brother to the iPhone. It’s the... 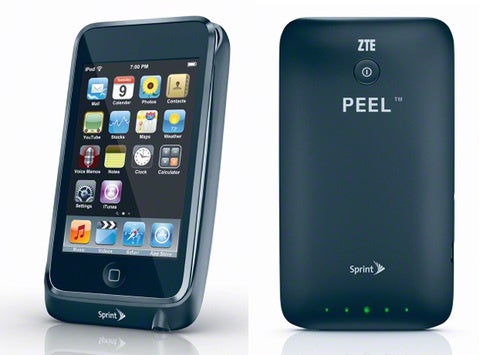 The iPod Touch, despite its immense popularity, has always been a sort of little brother to the iPhone. It’s the almost-iPhone, the crippled iPhone, the gadget that follows in the iPhone’s footsteps. That’s due in large part to its lack of a mobile wireless antenna–without 3G, it can never replace a smartphone. Sprint’s new ZTE Peel case changes that, and makes the iPod Touch into a very curious and very cool connected device.

The ZTE Peel is basically a 3G hotspot, similar to Sprint’s own Overdrive or Verizon’s MiFi. It takes in a 3G signal from Sprint and provides a Wi-Fi network that any Wi-Fi gadget can access. But unlike the Overdrive or MiFi, which are separate boxes, the Peel is a case designed specifically for the iPod Touch.

An iPod Touch with a ZTE Peel case has a few distinct advantages over, say, an iPhone. It’s inherently a contract-free, much cheaper device, and without the need for (more accurately, without the possibility of) a voice plan, the monthly plan will be much cheaper as well. The ZTE Peel can support up to two other Wi-Fi devices, a feature for which AT&T charges $20 per month on the iPhone. Oh, and it’s on Sprint, which in many cities has more reliable service than AT&T.

It’s not exactly an iPhone, though. For one thing, the case only supports the second and third generation iPod Touch, not the recent fourth-gen. It’s not clear why the case wouldn’t support the newest iPod Touch, and as the new model is so much better than the older ones (it has a camera and the same ultra-sharp screen and speedy processor as the iPhone 4), it’s a little bit frustrating. An encased iPod Touch also suffers from reduced battery life (about 5-6 hours of 3G time) and has no native calling or text messaging apps–you’ll have to pay for Skype or something similar for that. Oh, and it’s sort of a fatty–more than twice the thickness of the iPhone 4.

We might even recommend waiting for the next generation–we’d love to see a fourth-gen iPod Touch using a case that supports Sprint’s ridiculously fast WiMax network, especially now that WiMax is rolling out to more cities. But even now, the ability to give your iPod Touch instant phone-like capabilities, without the drawbacks of a (for many people) largely unnecessary voice plan or an expensive contract, is really, really cool.

The ZTE Peel case will be available in Sprint stores on November 14th for $80. Data plans cost $30 for 1GB of bandwidth–not thrilling, but remember, that’s all you have to pay.