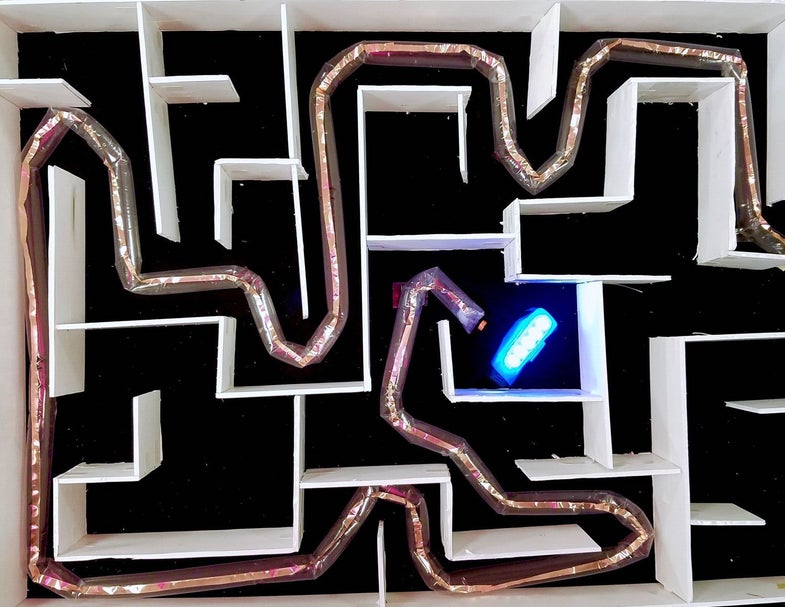 Like a plant seeking sun, the soft robot can detect light and then adjust how to grow to get closer and closer to the light. L.H. Blumenschein
SHARE

Robots often imitate life. We are used to bots mimicking humans, and animals, but there is plenty of life beyond the constraints of legged bodies that can inspire useful machines. Researchers at the University of California, Santa Barbara and Stanford University have made a machine with long tendrils that can perform dangerous tasks like reaching through rubble to pump air to a trapped earthquake survivor.

In a new study in the journal Science Robotics, researchers Elliot W. Hawkes, Laura H. Blumenschein, Joseph D. Greer, and Allison M. Okamura demonstrate a robot that travels through space like a living thing, but that is perhaps best thought of as a fast-growing, useful, mechanical plant, which unfurls from a single immobile foot. The robot’s design is explicitly plant-inspired.

“I remember watching an English ivy plant,” says Hawke, “over the course of months, grow around the corner of my bookshelf seeking the sunlight and thinking that in a certain, very slow way, it was going somewhere.”

One place the robot can go is “up.” With a body made of polyethylene (the same material as a plastic grocery bag), the robot expands through inflation, driven by a battery-powered air mattress pump. With a flexible antenna routed through its body, the robot can curl skywards, rapidly creating an impromptu way to broadcast radio.

From an 11-inch long casing, the robot can extend up to 236 feet, or a 25,000 percent increase in size. It can slide under doors or turn corners to get to its destination. With enough pressure, it can even slip through a crack, loop over a pipe, and then pull down on a valve, a kind of task that could save lives and spare rescue workers from risk during a gas leak.

With a camera mounted at its foremost end, the soft robot can even grow like a plant would, by seeking and bending towards light, inflating either the top or bottom chamber more to produce a bend in its lengthening body. The camera sticks out at the end of the robot’s body, and its cable runs through the core of the entire length of the robot. As the body grows, it pulls the camera with it, and unspools part of the cable. For payloads that the robot delivers at the end of its length, they are attached to the very tip of the robot’s body, emerging once the robot completely unfurls.

Those payloads might be an antenna, a sensor, or even a tiny surgical tool. Hawke says his team has scaled the robot down to less than a tenth of an inch in diameter, with the goal of making a machine that can unfurl inside veins as its own catheter and use a small blade to help with brain surgery.

For more traditional rescue roles, the soft robot can grow through flypaper, thick liquids, exposed nails, icy surfaces, and narrow gaps, and then be a vessel for air pumped to a trapped person, or water pumped onto a difficult-to-reach fire. And despite the thin material of its body, it can curl and grow to lift weights of up to 150 pounds, potentially freeing a leg from rubble. The body remains in place as the tip of the robot grows, making it as much a reliable pathway as a maneuvering tool.

“Navigating the environment by growth has two interesting benefits. First, a growing body can pass through very challenging, constrained environments because there is no relative movement between the body and the environment,” says Hawke. “Second, as the tip moves along a path, a structure is formed. This structure can have many purposes, like communication, support, or delivery of payloads. So unlike small animal-inspired search and rescue robots, the body of the growing robot could act as a conduit to pass oxygen or water to the trapped survivor.”

Future versions of the robot could use more robust materials, like rip-stop nylon or kevlar. And for surgical applications, Hawke says the team hopes to attempt in vivo testing in the near future. Soft robotics may not have the recognition of more famous rigid bodies, but like the plants and animals they replicate, they fit nicely into a human-shaped, organic world.

“I see soft robotics as being not about just making marshmallow robots for the sake of doing something different,” says Hawke, “but rather about a fundamental tradeoff when compliance is added to a robotic system: trading the precision and repeatability of traditional rigid robots for the adaptability and human-safety of soft robots.”