Ecocapsule Provides A Hub Away From Home

The next step in high-tech glamping 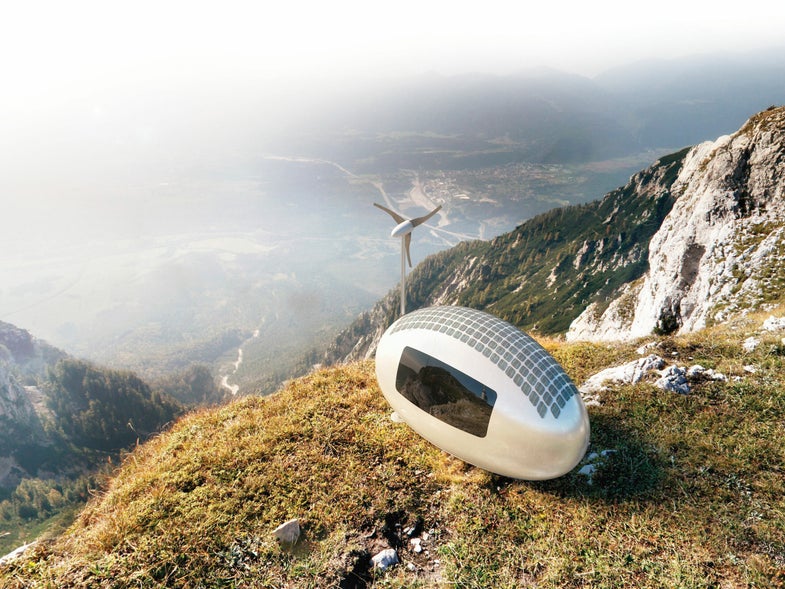 An Airstream offers retro appeal, but it can’t compare to the sustainable, high-tech glamping you could do in an Ecocapsule. Developed by Slovakian firm Nice Architects, the portable living space runs on sun, wind, and rain alone. Throw in a cache of canned food, and you’ll be set to hunker down indefinitely. The 14.5-foot, 1.7-ton pod can serve as a research station, disaster-relief shelter, or remote Airbnb almost anywhere. The second-generation version—which is expected to debut this fall and go on sale in 2016 — includes sleeping quarters for two, a kitchenette, a shower, climate control, and even electrical outlets. Plus, it comes equipped with a custom-designed H20-free toilet that incinerates your waste out of existence.

A 750-watt wind turbine and 600-watt solar array collect energy. Assuming outside temperatures stay between -13° and 104°F, the capsule can consistently produce all its own power. A super-efficient climate-control system helps: On its way to the exhaust fan, heated air passes through channels alongside fresh air, warming it up.

Should energy production dip, a 9,744-watt-hour battery holds five days of power. When the battery is charged, the system uses excess energy from the solar cells to heat up water stores, relieving strain on the water heater come shower time.

Rainwater runs down the capsule and through a ceramic filter into a 145-gallon reservoir beneath the floorboards. When full, it can supply two people for three weeks. Electric pumps circulate water through a membrane filter to trap dirt and bacteria en route to the sink and shower; manual foot pumps stand in when energy is low.

A central computer, controlled with a smartphone or tablet, monitors energy and water levels to project how long they’ll last. It’s also hooked up to sensors that record rainfall, humidity, and temperature outside the capsule. In periods with little sun or wind, the computer might suggest adjusting the internal temp or taking shorter showers to stretch the supply.

This article was originally published in the September 2015 issue of Popular Science, under the title “A Hub Away From Home.”