The incredible material is now wearable 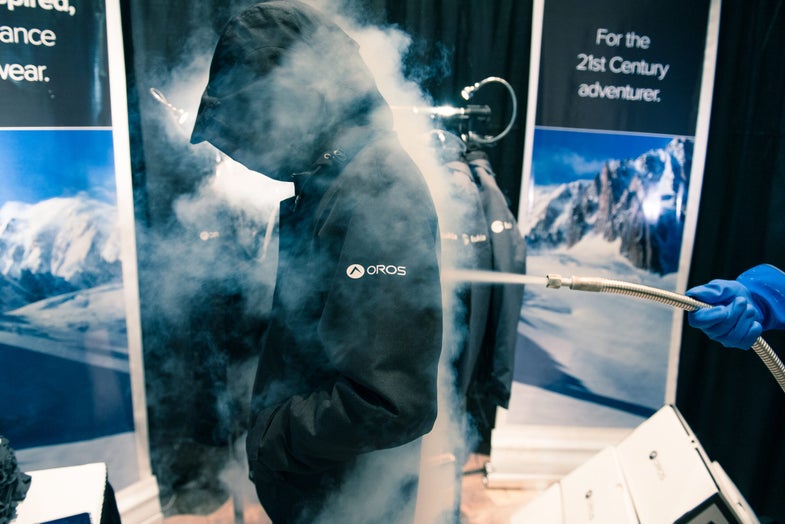 Aerogel is the material of the future— if you can make it work for you. The substance, a foam made of mostly air and either silica or carbon, is great for insulating, but it’s traditionally been brittle and difficult to work with.

Lots of companies like The North Face and Champion can (and have tried to) use aerogel, but Oros (formerly called Lukla) is betting these larger companies think it’s too much of a hassle to produce. The most famous example of this is Champion’s 2010 summit of Mt. Everest, when they outfitted a Canadian mountaineer with a jacket seemingly as thin as a windbreaker to deal with extreme cold. The jacket never went into production, as they claimed it to be exorbitantly expensive.

Oros claims to have found a better way to produce aerogel, which insulates just as well as its more brittle counterparts, but is much easier to work with and doesn’t rub off on the skin. Formerly, the substance needed to be contained within some kind of plastic or impermeable sealant to be used in clothing. Oros’ flavor, called SolarCore Aerogel, does not.

Aerogel is 99 percent air, as the name implies. Our air’s great ability to insulate does most of the work. NASA actually invented aerogel, and has been using it to insulate things like Mars rovers.

But Oros is putting this technology into jackets, gloves, and hats. By lining certain parts of the apparel with their flexible aerogel, which only absorbs a minute amount of heat, the clothing is able to better retain the heat made by the body. It’s the dream of every winter clothing manufacturer— near-perfect heat retention.

This is Oros’ second line of apparel, this time adding the gloves and hats and updating the kind of aerogel used. Oros actually had to pare down how much aerogel was used in the production of the jackets, hats, and gloves, because an issue was overheating, even in extremely cold climates. In a demonstration, the company tested their jackets against liquid nitrogen, which brought the outer temperature down to -321 degrees Fahrenheit, while inside stayed a balmy 89 degrees.

We got our hands on (and in) Oros’ new gloves and hat, and can attest they’re extremely warm. The gloves are dexterous, meaning you can wiggle your fingers and perform lots of tasks outside, but I unfortunately could not type the article with them on. (I tried.) The hat only uses the aerogel material around the ears, which does help prevent overheating.

However, we did put the items they gave us to test through their paces. Using our handy office FLIR thermal camera, we tried both the hat and gloves to see how well they retained heat.

We were surprised to see the aerogel let heat through as rapidly as ours did, as seen by the orange in the photos. These tests weren’t entirely scientific, but the clothing did leak a fair amount of heat, according to our readings.

The company is launching a Kickstarter campaign today, which is the only way to buy their new line. You can snag aerogel hats for $35, gloves for $99, and jackets for $275, for a limited time. You can still buy Oros’ previous line on their website.