As more and more tourists and workers head to the thawing Arctic, technology is helping them suit up for the high north. 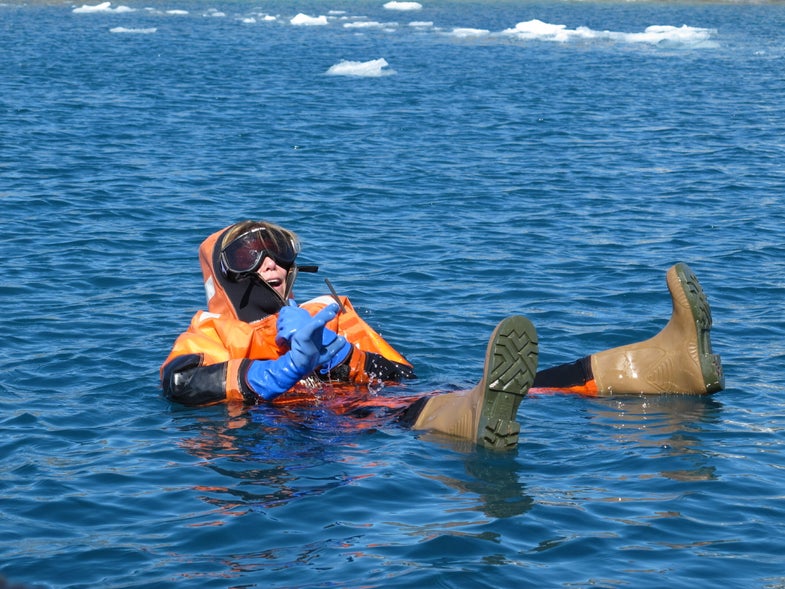 Susan Moran floats in the Southern Ocean in Antarctica in a Hellyy Hansen dry suit during a Zodiac water-rescue training.
SHARE

TROMSØ, Norway– Imagine you’re one of 6,000 passengers on a cruise ship in the Arctic Ocean far from Greenland or the nearest shore when the boat hits an iceberg and begins to sink. Or you’re working on an offshore oil rig in the Barents Sea when gusts of 80 MPH blow you into the frigid ocean. You’d be lucky if you had the physiology of Lewis Pugh, the seemingly bionic athlete who swam across the North Pole in 2007. If you’re like most mortals, however, you might say a prayer, or curse your elusive God, and then descend into shock and, perhaps, death long before paramedics in an ice breaker or helicopter arrive.

As climate change causes more Arctic ice to melt, many more tourism, fishing and cargo ships, as well as oil and gas and mining companies, are heading to the once-ice covered High North. So far most commercial activity has occurred in ice-free waters in the Norwegian Sea and the Barents Sea. But in 2010 the historically ice-clogged Northern Sea Route, which skirts Russia to connect the Atlantic and Pacific oceans, opened up enough to allow an ice breaker to cross from Norway to China. Last year 71 commercial ships passed through that route, which dramatically shortens the Europe-Asia routes that pass through the Suez Canal or Panama Canal. The pace of this traffic is far outstripping the speed at which nations and companies are building out search and rescue and other medical support infrastructure. Medical hubs are hundreds, even thousands, of miles away.

Tschudi Shipping Company AS transporting iron ore on a cargo ship through the Northern Sea Route from Kirkenes, Norway, to China, in 2010. This was the first non-Russian commercial shipment through the Arctic to China.

This undesirable calculus keeps Michael Tipton up at night. He is a physiologist at the University of Portsmouth in the United Kingdom who studies human physiological responses to extreme cold air and water. “Of any single event, I suspect a cruise liner accident would be the most catastrophic one I could think of,” says Tipton, co-author of the book Essentials of Sea Survival.

An accident in the Arctic could easily dwarf those of the Costa Concordia off of Italy in 2012 or the Estonia in the Baltic Sea in 1994. Both of those occurred in far warmer waters. Cruise ships are now much bigger – holding up to 6,000 passengers – and many tourists coming to the Arctic are increasingly older retirees, with less experience and physical strength. By comparison, the Titanic, on which 1,700 passengers died, had a capacity of 2,000. And it ran into an iceberg not far offshore. In the Arctic oceans passengers of a cruise liner have two major strikes against them when it comes to chances of surviving an accident: they would be much farther away from rescue services and their survival time in the water is much less than in temperate water.

Tipton spoke at a recent conference, called Arctic Frontiers, which was held in the city of Tromsø, above the Arctic Circle in Norway. Scientists, industry officials, and leaders of Arctic Council nations and indigenous cultures met to explore human health, economic and environmental impacts of a changing Arctic.

The distance from icy Arctic waters to existing medical centers is mind-boggling. For instance, last September a Canadian Coast Guard helicopter crashed in M’Clure Strait in the Arctic Ocean, roughly 370 miles west of Resolute, a small Inuit hamlet on an island in the Northwest Passage. All three men in the aircraft, who were conducting ice research, died of hypothermia in the ocean. Martin Fortier, executive director of ArcticNet, a consortium that manages Canada’s Arctic scientific research, told the Arctic Frontiers conference that the crash site was 4,000 kilometers (2,485 miles) from Trenton, Ontario, the nearest medical center. For perspective, he said, “That’s about as far as traveling from Tromsø to Africa.”

Those three men might have died anyway. But the likelihood of their demise was no doubt increased because they were not fully equipped for a crash; only one of them was wearing a full immersion suit, and it was not fully zipped up. And only one was wearing a life jacket. Wearing the proper protective clothing can vastly increase your chances of surviving in Arctic (or Antarctic) environments – whether you’re on a cruise ship, working in a rare earth mineral mine, tracking reindeer, or dog sledding through deep snow.

Researchers in academia, as well as in the clothing and fabric industries, are pushing the technical boundaries to better equip humans for living, working and traveling in extreme cold environments. So far they are not angling to see their test models on the cover of Vogue. Survivability trumps style. Test subjects donning a dry suit and many probes are submerged into a tub of freezing cold water for three hours as researchers –who spray them with more ice water every 10 minutes – measure how much they shiver, how quickly ice forms around them, how quickly and intensely blood stops flowing to their hands, toes and other extremities.

Hilde Faerevik is a senior scientist at Sintef, Scandinavia’s largest independent research organization. She manages Sintef’s ColdWear Project, which designs and tests survival suits and other clothing and materials for people working in the Arctic. At the Arctic Frontiers conference Faerevik pointed out that our ability to survive in cold water, for instance, depends on a complex interaction between individual human variables (such as body fat, age, gender, physical and mental fitness, level of hydration), duration of exposure, level of heat production from the body, other available equipment, climate, and so on.

Her talk reminded me of a time when I was an unwitting test subject for a full-body dry suit. The test lab was the ice-sprinkled, 31-degrees-Fahrenheit Southern Ocean near Palmer Station, a small U.S. research outpost off the Western Antarctic Peninsula, which I visited in December 2010. Despite donning the ice water-ready outfit, it felt counterintuitive, if not suicidal, to jump in the water. But it was part of a safety drill, and sure enough, once the psychological shock of hitting the water subsided, I could have stayed floating as tiny spec on the ocean for a long time, thanks to the gear I was wearing. 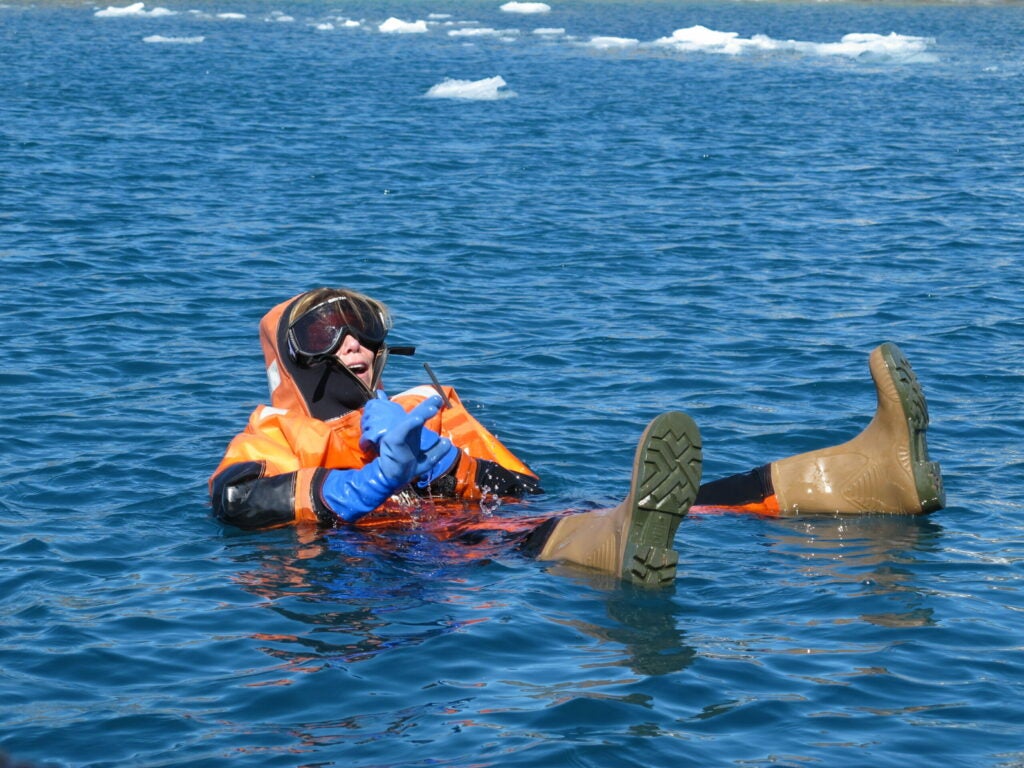 The Writer At Sea

Susan Moran floats in the Southern Ocean in Antarctica in a Hellyy Hansen dry suit during a Zodiac water-rescue training. 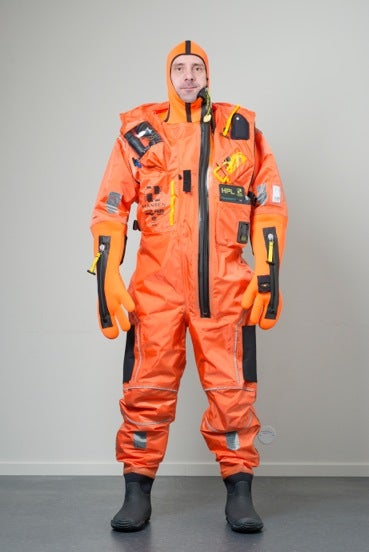 Every human body is different. What Lewis Pugh needs to survive his polar swim (not much, apparently), or even what English adventurer Sir Ranulph Fiennes needs to traverse Antarctica on foot (a lot), may not match what most of us would need to live, work or ski in the Arctic. What is certain, notes Tipton, is that left to our innate physiology alone, we humans would still be living close to the equator. “Man is a tropical animal,” he told the conference. “We have used our intellect, technology, to move out of the tropics.” Way out. Step outside your research base or ship a few hundred miles from the North Pole, and you get a -51°C (-60°F) wake-up call.

Some recent advancements by researchers at Sintef lie at the intersection of electronics and textiles. But unlike Google Glass or other wearable electronics that are the rage among the high-fashion digerati below the Arctic Circle, the sensors, LED lights and other gadgets that are embedded in these outfits are meant to keep you alive in the freezing cold air or water. For instance, having an emergency contact alarm built into a jacket and an LED built into a neoprene glove lighting the way you point puts fewer steps into crying for help or when the body and mind are compromised.

Hansen Protection, a division of outdoor clothing maker Helly Hansen, works with Sintef to design and commercialize protective gear for various extreme environments. Among the outfits it made and sells is the bright orange helicopter transport suit, called the Sea Air Barents, the latest improvement from the previous Sea Air model. Sintef is also working with Norwegian oil and gas company Statoil to design functional and comfortable clothing for oil rig and other workers. According to a Statoil field study, 67 percent of Statoil employees at Melkoya, a liquid natural gas plant near Hammerfest, Norway (70 degrees North latitude), work outdoors in areas exposed to “severe weather conditions” every day. Petroleum workers who were exposed to ambient temperatures of 5°C (41 -51°F) or colder (they were tested down to -25°C, or -13°F) experienced lower skin and body temperatures and a reduced manual performance. The studies concluded that existing protective clothing for petroleum workers in the High North is not adequate to maintain manual performance and thermal balance.

Technological innovations are often tested by and for the military or costly private expeditions before they trickle into the marketplace for more commercial and consumer applications. For instance, Steve Holland, president of SJH Projects, worked with physiologist Michael Tipton and his colleague Geoff Long to design gear for Sir Ranulph’s attempt last year to cross Antarctica in the winter, as well as his previous treks to the North Pole and Antarctica. (Sir Ranulph, who is nearly 70, continues to test human limits in extreme terrain despite having lost much of the fingers on his left hand to frostbite–first at the North Pole in 2002 (after dipping his bare hand into the ice water to pull equipment from the sea) and then again in Antarctica last year. Here is a photo of Sir Ranulph’s hand.

Holland and others designed Sir Ranulph’s and his crew’s gear after rigorous, some would say torturous, testing. For the clothing, Holland and Long subjected human guinea pigs to a cold chamber chilled to -53°C (-63°F) while they moved in various positions to measure the temperature and dexterity of their extremities as they performed tasks, as well as how effectively the fabric wicked body moisture away from the subjects’ skin.

Ultimately, Sir Ranulph wore full protective clothing with up to 5 pounds of batteries and cords that heated up the helmet, gloves, boots and other items. “We had to design equipment for The Coldest Journey equipped for absolutely no possibility of being rescued whatsoever,” says Holland.

Such brutal conditions as Sir Ranulph’s treks may make working on an oil rig in the Barents Sea –with shelter not far away — look like vacation in the Bahamas. But designing equipment for such extremes can also inform textile innovations for more common use in the Arctic. As Tipton says, even if our physiology is geared for the equator, it’s the technology that our brains develop that will keep us venturing farther and farther north.