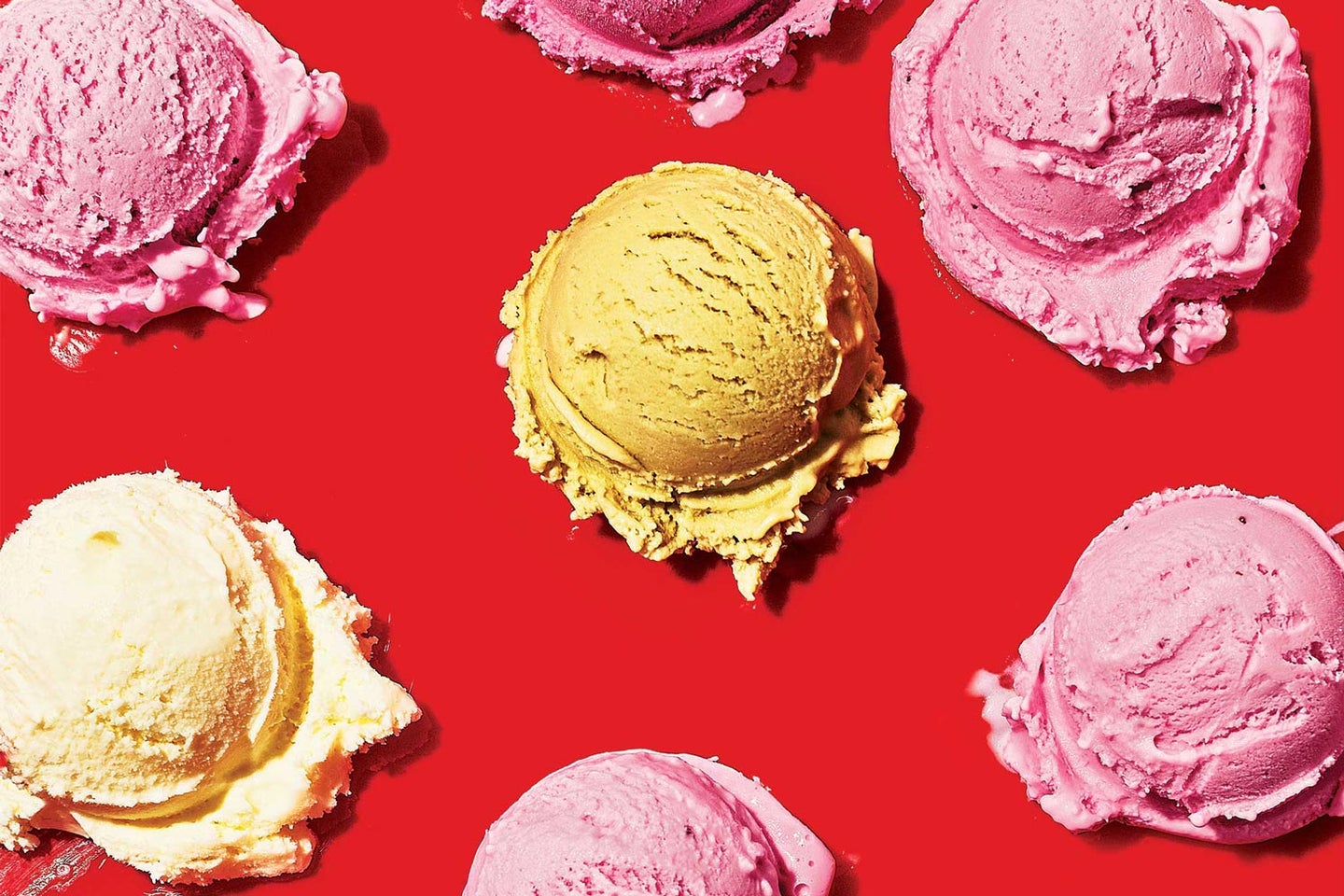 This article was originally featured on Saveur.

Ice cream is a miracle. You start with milk, one of the most chemically complex foods we eat. Add sugars to reduce its freezing point, and egg proteins and emulsifiers to obstruct ice crystals. Then you stick this gloppy stuff in a portable freezer and pump it full of air until spinning butterfat globules coalesce to give it form. That’s bananas, but somehow it works. Weirdest of all: Making it yourself is actually very easy.

Frozen dessert technology has come a long way since the days when Emperor Nero would send Roman slaves into the mountains to harvest blocks of ice, shave it down, and sweeten it with honey. In 1843, Nancy Johnson of Philadelphia patented the first ice cream freezer, but it required relentless hand-cranking and relied on rock salt to lower the temperature of the ice. Today, affordable entry-level ice cream makers can churn out a noticeably superior product compared with mass industrial brands, and are as simple to operate as a blender.

As Dana Cree, author of the ice cream bible Hello, My Name is Ice Cream attests, professional-quality ice cream doesn’t require thousands of dollars in hardware. But it does demand understanding how ice cream actually works, and using that knowledge in the war against bland flavors and icy textures.

After making ice cream for years and developing a hundred-plus flavors, here are 10 sweet tricks I’ve picked up that can help your homemade ice cream, no matter the flavor.

1. Chill your base thoroughly

Whether you’re making a light and fresh eggless recipe or a dense and creamy egg-enriched custard, the first step to properly creamy ice cream starts before you churn it. Before you stick it in the machine, make sure it’s thoroughly chilled, under 50°F, which you can measure with a thermometer (see below) or guesstimate with an overnight chill in the fridge.

In many cases, “aging” your base like this improves its flavor and texture, as ingredients combine and fat globules partially coalesce to form more stable air bubbles as the ice cream churns. At the very least, chilling your base ensures it’ll churn into ice cream as fast as possible, which translates into small ice crystals for creamier ice cream. Chilling your base also gives you the added advantage of tasting it in close-to-final form, so you can make final flavor adjustments.

Structurally speaking, ice cream is basically bread. They’re both foams—networks of compounds connecting millions of tiny air bubbles—and as you’d do with a bread dough, you can tweak an ice cream’s formula to adjust its texture. Enriching a bread dough with butter will make the loaf more tender. The same is true for ice cream; the more butterfat you add (i.e., the more cream as opposed to milk), the richer the ice cream will be. Butterfat also adds texture insurance against iciness, especially handy if your base has watery elements like fruit purée.

To continue our bread analogy: As bakers add sugar to bread to keep it soft and moist, ice cream makers alter consistency with sugar. By binding with liquids, sugar molecules prevent an ice cream base from fully freezing into crunchy ice. That is, the more sugar you add, the softer and less icy your batch will be.

The kind of sugar you add also matters. High-viscosity liquid sweeteners like honey, glucose syrup, and yes, good ol’ corn syrup make for a more viscous base, which translates into chewy richness in churned ice cream. Substituting a small portion of the plain table sugar in your recipe with one of these high-viscosity sweeteners can have a big impact on the final texture.

When it comes to sugar, viscosity isn’t the only thing that matters; sweetness does too. Honey, for instance, is sweeter than table sugar, and it’s easy for an ice cream with too much honey to a) overwhelm the flavor of everything else and b) turn the ice cream cloying. That’s why I’m a big fan of corn syrup, which is only a third as sweet as table sugar, adds chewy viscosity, and allows me to boost the sugar level of a recipe for better texture without overwhelming the ice cream with sweetness.

Remember: Corn syrup you buy in supermarkets is a far cry from the high-fructose stuff that goes into processed food. It’s literally just refined sugar from corn as opposed to sugarcane or beets. No need to fear it. But if you’d prefer to avoid corn syrup, glucose (powdered or in syrup form) works great too.

Many manuals call for adding a shot or two of liquor to your ice cream base as added antifreeze insurance. This works, but you should know what it actually means, and how under certain circumstances it can hurt your ice cream more than help.

Alcohol does reduce the freezing point of ice cream, which translates into a softer scoop. But it’s not a creamer scoop, or a more stable scoop, or necessarily a better scoop: just softer, without any increased body. Ice creams with alcohol melt faster than those without, and those with too much booze never fully freeze. Which is why I’d much rather adjust the butterfat or sugar content of my recipe before I start messing around with booze to make it creamier.

5. …but your bar will serve you well

That said, liquor does have an important place in the ice cream maker’s toolkit. Think of whiskey, rum, or cocktail bitters as another kind of vanilla extract. Both involve potent aromatics dissolved in alcohol and can lend complex background flavor to a simple base. So in any ice cream recipe that calls for flavored extracts like vanilla or mint, try substituting an equal amount of your favorite cocktail bitters. (I’m a big fan of orange, Peychaud’s, Angostura, and saffron for this.)

If you’re making a thicker, custard-style batch of ice cream, you run the risk of overcooking your eggs, curdling the base while adding unwelcome eggy flavors. Many recipes call for you check the custard’s doneness by seeing how it coats the back of a spoon and holds a line when swiped with your finger, which I find both crazy inaccurate (there’s a wide range of temperatures at which this will happen, not all good for ice cream) and unhygienic.

A quality thermometer (the Thermapen is best-in-class for accuracy, speed, and readability) will help you locate the ice-cream-custard sweet spot: 170 degrees. It’ll also tell you when your chilled ice cream is ready to churn, no guesswork required.

For distinct swirls, don’t swirl at all—layer. As you transfer a batch to its container, alternate ice cream with drizzles of butterscotch, caramel, chocolate sauce, or pomegranate molasses. Doing so will keep your swirls neat and tidy; the swirls will naturally form as you scoop.

If you want to add nuts to your ice cream as chunks, toast them in a dry pan to boost their flavor. Then chop them to the desired size and shake them around in a sifter to dislodge any shards and skin. Sieving is a small step but an important one to keep gritty schmutz out of your ice cream. Follow the same step for chocolate chips, semi-hard candies—anything that produces small crumbs.

9. …and don’t let them run around naked

Starchy sweets like cookies and popcorn will turn soggy in ice cream over time. To keep them crisp, enrobe them in chocolate or candy them in sugar. Or try these pre-enrobed options, guaranteed great in ice cream: Cracker Jacks and Pocky.

Adding hunks of fresh fruit to churned ice cream is a risky proposition, one that generally leads to icy crystallized fruit that tastes more like freezer than summertime. Generally I prefer to add fruit as a topping to avoid the problem, but there are times that just won’t do. So for cherries, strawberries, and other small fruits, cut them into small pieces and macerate them in sugar and your favorite liquor (Grand Marnier is nice) for a couple of hours as antifreeze insurance. Or use a reliable premade: Luxardo’s maraschino cherries.