Paul Bunyan would not be proud of some of these. 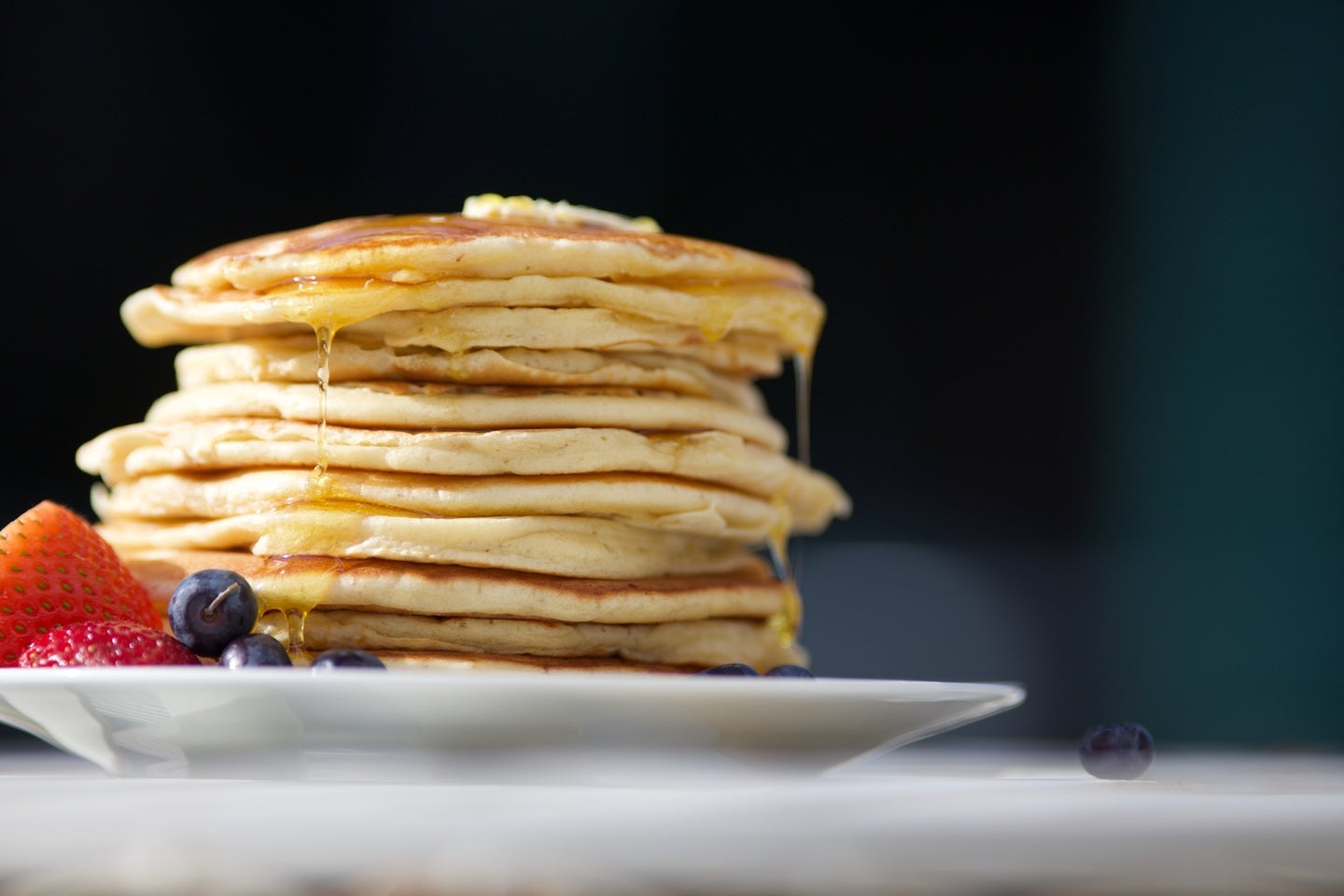 Pancakes are amazing. They’re the perfect breakfast food, a great alternative for dinner, and an amazing late-night snack to get at a diner at 3 a.m. Other than their sultry golden tan and their soft, syrup-soaked fluffiness, one of the most beautiful things about pancakes is that they’re always just a craving away—they’re easy to get, but they’re also really easy to make.

Even if your cupboard is missing one of the four key ingredients in the classic pancake recipe (milk, butter, egg, and flour) and you can’t be bothered to put on pants to go get it, you can still satisfy those hunger pangs by substituting something else in your kitchen.

For the sake of science and our relentless drive to help you live your best life, we tried substituting each of those four ingredients and can definitively tell you how well they worked. Now, the next time you have a hankering for those fluffy pieces of heaven, you’ll know what to expect.

In the world of baked goods, milk has the double function of providing food with both structure and texture. Without it, your tasty treats would lose some of their consistency, and sometimes even their flavor. While surfing the internet for a good replacement for this critical ingredient, I came across this recipe from Good Housekeeping that suggested using water, coffee, or even orange juice. In terms of flavor, water would’ve been too boring, so I opted for OJ. I’m intrigued by the weird stuff, OK?

But because milk is thicker than many other liquids, you’ll need to be careful. If the original recipe calls for 1 cup of milk, aim for a 3/4 cup of your replacement liquid. And instead of pouring it all in at once, try adding it 1/4 cup at a time until your batter reaches the desired consistency: viscous, but not too runny. You can always add more, but you can’t take it back once everything’s combined. If your mixture is too watery, cooking your pancakes will be tricky—they’ll either fall apart as you flip them or burn on one side as you wait for them to be ready. Even with perfect batter, your milkless flapjacks will likely be a bit softer than traditional ones.

In terms of flavor and texture, this recipe was something else. The same softness that made them a bit hard to handle on the skillet also created a cloudy, mouthwatering texture with the capacity to absorb a lot of syrup. The OJ came through as an aftertaste, but it was far from unpleasant—if you like orange pound cake, this is basically the pancake version of that. It’s a unique and not-at-all classic-tasting pancake, but definitely worth trying if you’re adventurous.

This is an easy one. Most no-butter pancake recipes simply swap the churned cream out for some other kind of fat, often vegetable oil. I chose this “Easy Basic Pancakes” recipe by Martha Stewart, but the story is the same across the web: replace butter with the same amount of vegetable, canola, or olive oil. One can’t subsist entirely on one food especially pancakes (as much as I wanted to), so I enlisted Popular Science‘s DIY editor, John Kennedy, to whip these up. He used canola oil.

Ultimately, this substitution didn’t make much of a difference in terms of batter texture and end result—the mix was just as you’d expect a bowl of pre-pancake to be. The final flapjacks tasted good, but they weren’t as fluffy as classic pancakes. Still, they soaked up syrup quite well, and that’s a key characteristic of quality pancakes if you ask us.

Depending on how you use them, eggs have lots of functions in baking—the yolk, the white, or the whole thing. Their most important job, however, is to provide structure and stability to delicate foods. It’s what allows souffles to rise and makes eclairs buttery without either losing their form. Without them, things get, well, a lot denser.

As with most no-egg pancake recipes, the one we used from FoodHero.org didn’t seem to replace eggs with anything in particular—it just didn’t have any. It did include more liquid than the other recipes we tried, though—two tablespoons of water, and one of vanilla extract, which was optional, but we did use.

The main problem with this substitution is that even though there was a little more liquid, there was nothing to counterbalance the flour. The batter was thick, sticky, and hard to work with: It took a little more whisking than usual to create a homogeneous mix, and I had to use my hands to get the batter out of the measuring cup and onto the skillet. Because of the texture, the mix also didn’t properly expand while cooking. Instead, my no-egg pancakes just rose, so they ended up looking more like biscuits. On the bright side, they cooked pretty quickly (approximately 1.5 minutes), and were quite sturdy and easy to flip.

Taste-wise, the flour dominated, and my pancakes tasted a lot like bread. The texture was great—thick and soft, though a little dense, which ultimately allowed it to absorb quite a bit of syrup. It might’ve been the flour, or because each bite was filled with more syrup than usual, but I found eggless pancakes to be quite heavy. I got one down and felt immediately stuffed. I am kind of a wuss when it comes to food, though.

Flour is a really important ingredient in pancakes, so it’s hard to come up with a recipe that replaces it with something other than an alternative flour or a banana. The latter would’ve been OK if I wanted to make banana pancakes, but I didn’t, so I dove deeper (10 minutes—the internet equivalent of forever) until I settled on [this recipe from mycrazygoodlife.com. It replaced flour with old-fashioned oatmeal, but since all the ingredients had to be blended together in a food processor, it’s safe to say it basically replaces regular flour with oat flour.

The recipe also gave the option of including a banana or a 3/4 cup of cottage cheese. I did the latter, hoping to avoid falling into the banana pancake vortex.

If you were hoping for something close to traditional pancakes, I’m sorry to report that this substitution was a disaster in every way pancakes can be a disaster. The batter was extremely runny; mostly liquid. As much as I left the mix going round and round in my food processor, the oats never pulverized enough to actually resemble flour. It might have been better to blend the oats first, by themselves, but the recipe didn’t say to do so. In the end, the batter ended up being a watery mess that I had to keep stirring so the sunken lumps of oats wouldn’t just sit at the bottom of the bowl every time I poured the mix on the skillet.

Because the batter’s consistency was so liquid, it was hard to pour the pancakes. I used a 1/4 cup measure for every batch I made for this story, but that amount of batter here resulted in thin, oblong-shaped pancakes that tended to run toward the edges of the skillet. Their size also made them quite hard to flip—I ended up breaking a bunch of pancakes.

Flavor-wise, things weren’t any better. They were not unpleasant, but they didn’t taste like pancakes, either. The recipe called for six eggs, which is a lot, considering a batch of traditional flapjacks only includes one egg. Sure, the extra eggs kept everything together—normally the flour’s job—but the pancakes looked more like thin omelets. They tasted like them too—thin, cinnamon-flavored omelets.

After I threw away the uncooked batter and the eight pancakes I had already made, I wondered if flourless pancakes were, indeed, terrible, or if it was just a bad recipe or a personal failing. For the sake of scientific truth, we embarked on another flourless pancake adventure.

Hoping for a different result, I asked Kennedy to try this recipe from The Castaway Kitchen that replaced flour with a 3/4 cup of unsalted cashews. Both of us will eat cashews in almost any form, so we had high hopes. They would be dashed.

As with the previous attempt, these pancakes tasted a lot like egg-only omelettes with a hint of vanilla and cinnamon, something we should have foreseen by just looking at the five eggs on the ingredient list.

Here, Kennedy ground up the cashews first, before adding the other ingredients to his food processor. Still, the results weren’t as fine as flour and the larger cashew bits sank to the bottom of the rather fluid batter. Skimming from the top resulted in thin, lighter-colored, pancakes, while dredging deep made darker flapjacks full of obvious nut chunks.

Conclusion: some things are just irreplaceable

Being avid pancake fans, we have a ton of respect for these delicious, golden, edible discs of joy, so we were surprised by how loosely the term “pancake” has been used by some people on the internet. Not everything that’s round and fluffy is a pancake, and just because it’s golden doesn’t mean it tastes good.