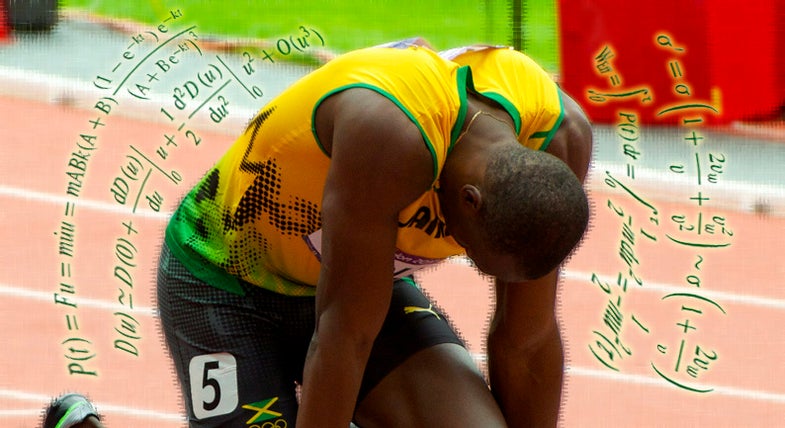 In 2009, at the World Championships in Berlin, Usain Bolt beat his own previous world record by 0.11 seconds, running a 9.58-second 100-meter dash. The record is getting more and more difficult to break, as it’s history shows (and as we may be nearing the limit of human speed), making each new record-breaking performance intriguing to physicists. A study, published today in the European Journal of Physics, examines the physics of Bolt’s historic feat.

Using approximate race-day conditions (temperature, altitude, Bolt’s surface area) along with measurements from the race’s laser velocity guard device (which measured Bolt’s position and speed every 0.1 second), the researchers were able to calculate the immense amount of drag that Bolt overcame. Bolt used 81.58 kJ of energy during the race, but 92.21% of that energy was absorbed by the drag! Additionally, Bolt’s maximum power output was 2619.5 watts after only 0.89 seconds of the race–more than enough energy to power a large vacuum cleaner (or the Pirate Bay).

At the 2012 London Olympics

The researchers’ equations mapped so perfectly onto Bolt’s actual performance that they were also able to make predictions based on hypotheticals: if there had been no tailwind at Berlin, Bolt would’ve ran a 9.68; with a stronger tailwind of 2 m/s, he would’ve ran a 9.46 (which would’ve actually beaten the purported limit to how fast a human can run); and obviously, “if Bolt were to run on a planet with a much less dense atmosphere, he could achieve records of fantastic proportions,” the lead researcher says in a press release. However, the equations won’t work for greater distance sprints, for their calculations assume that in a 100m race the runner is able to maintain “a constant horizontal force,” as opposed to, say, a 400m race in which the force gradually tapers off due to extended exertion. It might take extraterrestrial conditions for anyone to beat Bolt’s extraordinary feat anytime soon–he’s nearly superhuman. 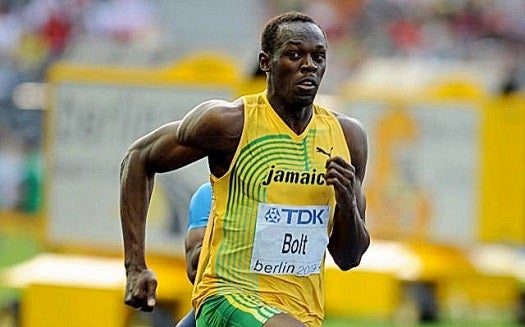 At the 2009 World Championships in Berlin
Physics
mathematics
Sports