You Can Gas Up Your Car With Garbage, If It’s The 2015 Chevrolet Impala Bi-Fuel

With the 2015 Chevrolet Impala Bi-Fuel, drivers can top off their tank with waste byproducts, almost like Dr. Emmett Brown... 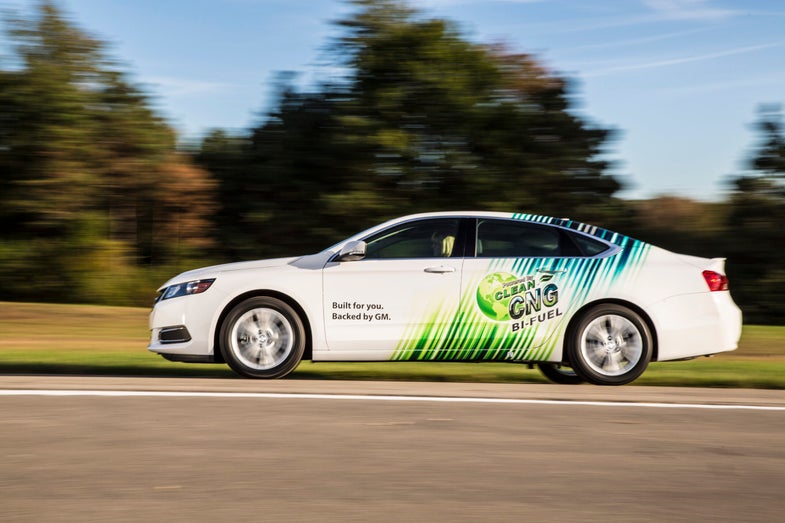 The 2015 bi-fuel Chevrolet Impala, the industry’s only manufacturer-produced full-size sedan in North America that can run on both compressed natural gas (CNG) and gasoline, will go on sale with a starting MSRP of $38,210, including an $825 destination charge, but excluding tax, title, license, dealer fees and operational equipment.
SHARE

With the 2015 Chevrolet Impala Bi-Fuel, drivers can top off their tank with waste byproducts, almost like Dr. Emmett Brown — aka “Doc” — did with his time-traveling DeLorean in the movie “Back to the Future.”

But instead of dumping banana peels and backwash from a beer can directly into the DeLorean’s “Mr. Fusion” reactor (see the video clip below), Impala Bi-Fuel owners simply fill up on natural gas, some of which comes from biogas, Chevy points out in its announcement about the new full-size sedan arriving in dealerships soon.

Biogas is derived from the methane that microrganisms emit after breaking down organic waste material in an oxygen-less environment. The process is called anaerobic digestion.

One of the producers of biogas is the energy company Quasar, based in Cleveland, Ohio. Quasar uses anaerobic digestion to process up to 25,000 wet tons of biosolids from the City of Columbus Department of Public Utilities. It also processes organic by-products from Anheuser-Busch’s Columbus brewery and food waste from Progressive Field baseball stadium, among other materials.

The advantages of using renewable natural gas made from recycled waste material are manifold. For one, producing compressed natural gas through anaerobic digestion uses less energy than conventional production methods, which require extracting natural gas from the ground and transporting it to a refinery. “That’s all before the cost to compress the natural gas into CNG,” says Caroline Henry, vice president of marketing at Quasar. “Not only does renewable natural gas cost less to produce, but it also diverts waste from landfills and incinerators that pollute the air, soil and water.”

The 2015 Chevrolet Impala Bi-Fuel can drive about 150 city miles on compressed natural gas. The car has a trunk-mounted tank that stores the equivalent of 7.8 gallons. If the compressed natural gas runs out before the driver has a chance to refill it, the car automatically switches to gasoline. The changeover is seamless and imperceptible, Chevy says.

Drivers can also switch between the two fuels at will by pressing a button on the instrument panel to the left of the steering wheel. Total expected range for the two fuels combined is 500 city miles, according to Chevy. Environmental Protection Agency estimates for fuel efficiency are not yet available for the bi-fuel version of the 2015 Impala.

Another downside to compressed natural gas as an automotive fuel is that it’s only available at 769 fueling stations in the United States, according to the U.S. Department of Energy. This compares to 168,000 gas stations nationwide.

The Impala is not Chevrolet’s first bi-fuel vehicle. Earlier this year, it started selling a version of its Silverado pickup that can run on compressed natural gas. It also offers the Spark hatchback as a bi-fuel vehicle in Italy. One of its earliest bi-fuel vehicles was a Cavalier sold in the early 2000s.

Chevy isn’t the only automaker getting into natural gas propulsion. Honda sells a version of its Civic that runs on this alternative fuel. Mazda is considering producing a compressed-natural-gas version of its 3, a direct competitor of the Civic. The company showed a concept version, called the Mazda3 CNG, at the 2013 Tokyo Motor Show.

Most natural-gas-powered vehicles currently in use belong to commercial fleets. Many are retrofitted with aftermarket bi-fuel conversion kits. “We own and operate a fleet of almost thirty dedicated or bi-fuel CNG vehicles,” says Quasar’s Henry.