Human oocytes can last for up to 50 years—and a newly discovered metabolic pathway is key to this longevity. 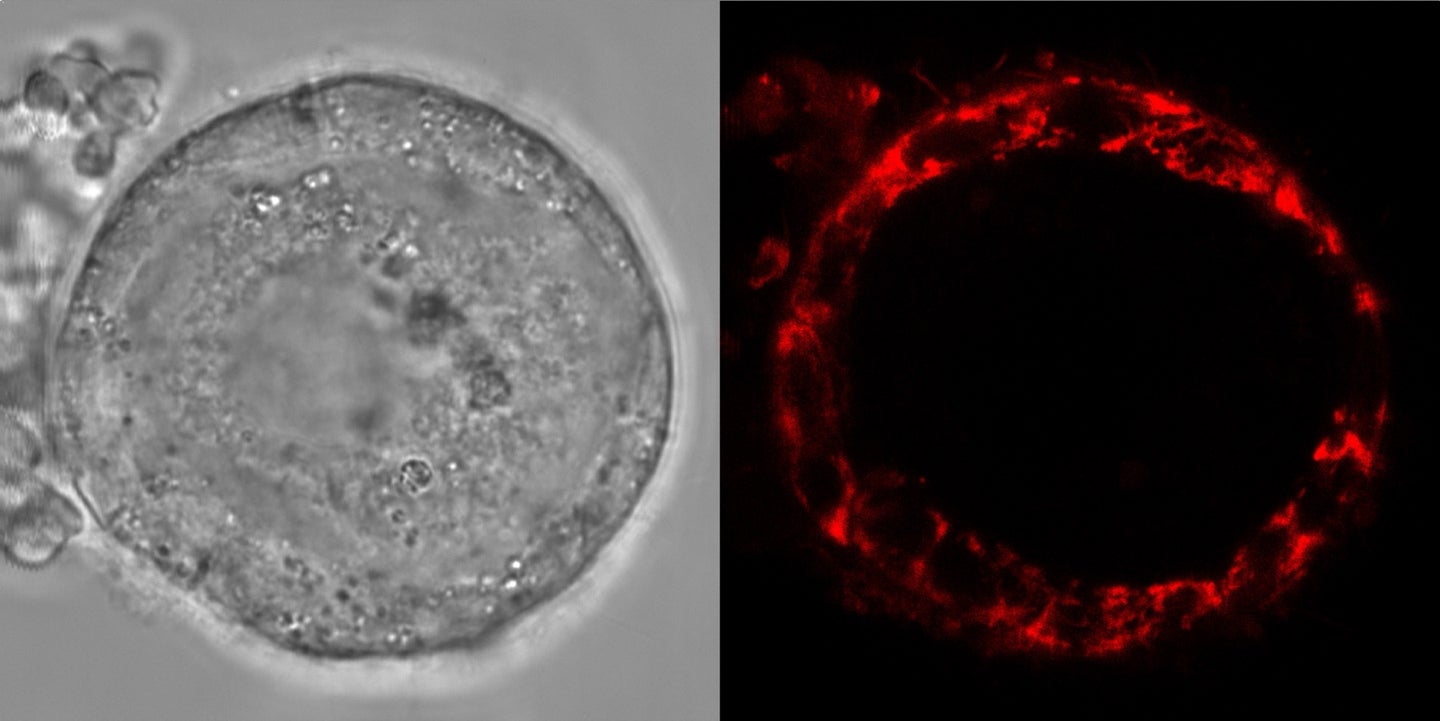 A live cell image, with surrounding cells supporting the oocyte contained inside. Activity of harmful reactive oxygen species, shown in red, is virtually absent in the oocyte. Aida Rodriguez/Nature
SHARE

Human eggs are designed to hold out for a long haul. When a person is born with a female reproductive system, they’ve already developed all the eggs they’ll have for the rest of their life. Yet, the ovaries’ roughly 1 to 2 million immature egg cells, known as oocytes, can stay healthy and be successfully fertilized for up to 50 years, hinting to reproductive scientists that they must have a secret strategy to avoid damage for so long. Now, a team of developmental biologists based in Barcelona, Spain, have discovered that a key part of oocytes can shift into a “standby battery mode,” preserving the finite reserve for longer.

A study published on July 20 in the journal Nature reveals that the mitochondria in oocytes tap into a different energy pathway that sidesteps the production of free radicals—chemical molecules that can wreak havoc on DNA, proteins, and cell walls. The findings bring new light to the longevity of these cells and could potentially help advance fertility strategies.

“Female fertility decreases by age, and if you look at demographic studies, more and more women choose to give birth in their mid-30s,” says Elvan Böke, senior author of the study and group leader in the Cell and Developmental Biology Program at the Center for Genomic Regulation in Barcelona. But around this age, “oocyte quality decreases, and that accounts for the majority of female fertility problems,” she notes.

Human oocytes are particularly unique, says Böke. Given our extended lifespans, the cells must remain dormant in the body for decades—but unlike other long-lived cells like neurons, they can’t regenerate, and any damage could impact the health of the baby. It’s a risky, but pretty successful strategy that’s not well understood, explains Böke. “Oocytes are studied very little in the literature because accessing them is very, very hard,” she says. Previous research on other species suggest that normal oocytes have a slow metabolism, which allows for long-term stability. What that means for the cells’ long-term survival, however, is still a mystery.

“These cells live very long, and presumably, they have something else going on compared to other cells,” Böke says. “We wanted to know what the oocyte strategies are to keep youthful cytoplasm and cell structure for many years.”

Böke teamed up with lead study author and genomic researcher Aida Rodríguez-Nuevo and other colleagues to investigate the activity of mitochondria in oocytes, specifically searching for traces of harmful reactive oxygen species (ROS), or free radicals. In certain types of properly functioning cells, these molecules can help usher along necessary processes. But if their levels are too high, they can cause a lot of damage, and even cause cancer in some cases. “You don’t really want to have a lot of them,” says Böke.

[Related: Why doctors still don’t understand the side effects of hormonal birth control]

Mitochondrial issues are one of the main reasons reactive oxygen builds up in the body. As the powerhouses of cells, mitochondria have a series of protein complexes lining its membrane that shuttle electrons and positively charged hydrogen ions to generate energy. But electrons can leak from the chain and go on to bind to oxygen—forming the free radicals.

“Every cell that I know of has some reactive oxygen species,” says Böke. To analyze levels of ROS, the team applied mitochondrial dye to live early oocytes from humans, as well as the frog species Xenopus laevis, which have exceptionally large oocytes. But when the team imaged the cells, they found no detectable ROS. “Other cells are like bright lights under a microscope, and oocytes are like pitch black.”

Next, the team investigated where the process of free radical generation was different in oocytes from other cells in the body. They found that the key modification was the absence of the first protein complex, often referred to as the main “gatekeeper” of electrons. Complex I is the main source of electron leakage in the mitochondria.

Essentially, the “oocyte’s mitochondria are basically like on standby mode,” says Böke. “They’re still producing energy, but are not super active.” The team was able to show that the cell parts shifted their energy production to the second protein complex, that while less efficient, produces just enough of a small trickle of energy to help the oocytes stay alive and maintain essential functions. However, once the immature eggs begin to grow during ovulation, the first protein complex is assembled and kicks back into gear for energy production, the authors write in the paper.

[Related: How jumping genes hijack their way into the next generation of babies]

“Now that we know that complex I is not essential, meaning that other protein complexes are actually filling in on its behalf, this means that the metabolic wiring of the oocyte is different than many other cells,” says Böke. In a review article of the study published in the same issue of Nature, biomedical researchers at Monash University in Melbourne, Australia, noted it would be interesting if this altered metabolic pathway could be a universal feature of early-stage oocytes in other long-lived organisms.

“This finding has implications for understanding how long-lived cells maintain viability over decades,” write the authors, who were not involved in the research. “Specific to eggs, the discovery adds to our understanding of how the remarkable primordial oocyte provides a safe haven for both nuclear and mitochondrial DNA between generations.”

But Böke says that the mitochondrial quirks and low levels of free radicals probably aren’t the only factors that play into oocyte longevity. Her team is looking at other potential tactics, and plans to further investigate the specific energy sources oocytes use to survive in the ovary. Further answers could provide a fuller picture of the connections between diet, nutrition, fertility, and the hardiness of human eggs.

Böke hopes that the new findings could help with future fertility assessment, too. She’d like to see if the change in metabolic activity in the mitochondria has any impact on people who are infertile, she says. “Extending the reproductive lifespan even like five years is going to mean that the age females can become pregnant will go from 35 to 40,” she says. “That will actually make a huge difference.”