States are playing catch up as they try to decriminalize opioid tests that are accessible to the public. 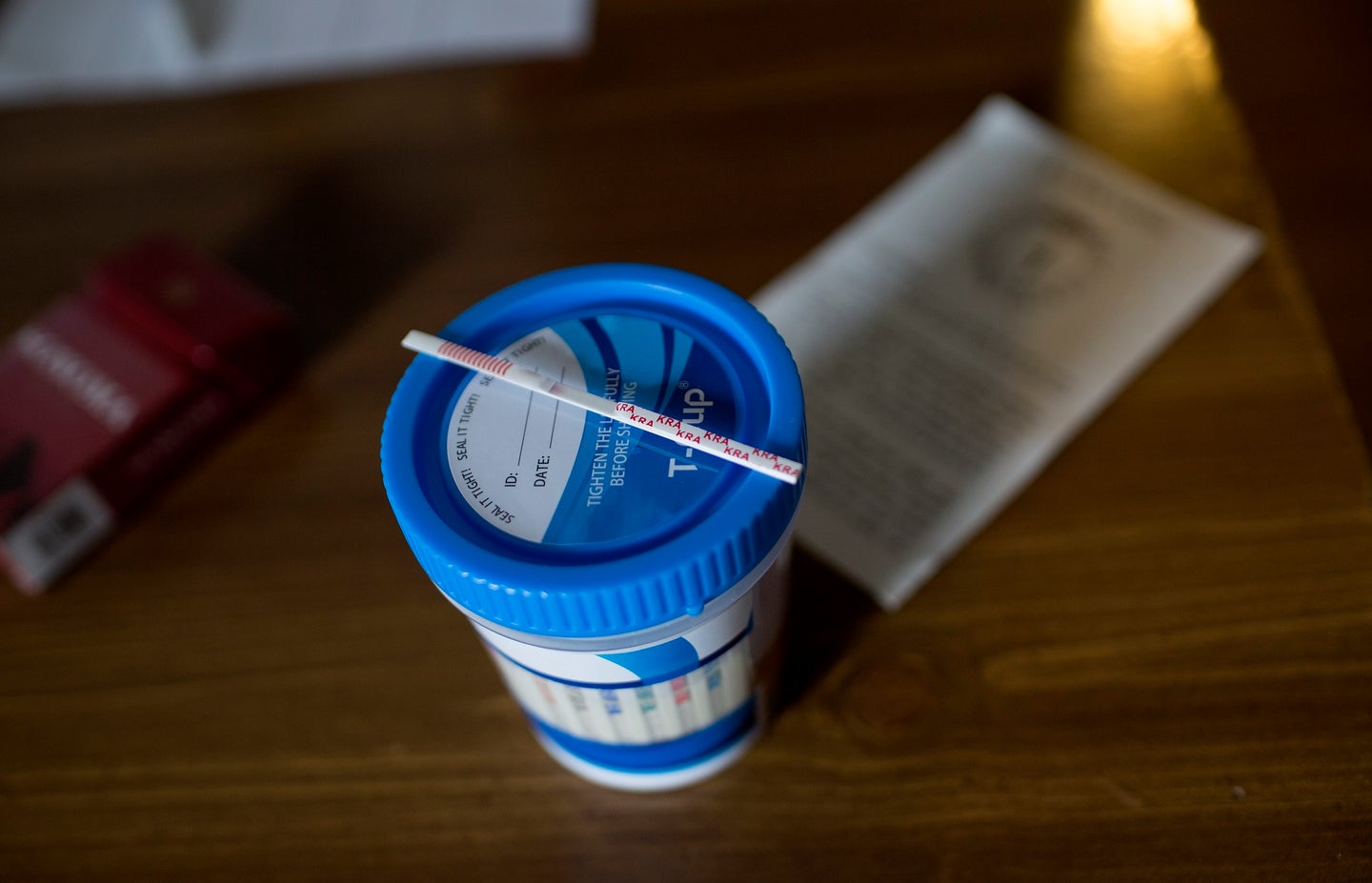 A fentanyl test strip can be used to check a drug user's urine or a sample of the opiate mixed with water. Andrew Lichtenstein/Corbis/Getty Images
SHARE

Over the course of the pandemic, drug overdose deaths, already an official public health emergency, surged even higher. In 2021, 100,000 people in the US died of overdoses, a 30-percent increase over the year before. Many experts think the wave of deaths is due in part to the isolation and economic desperation of COVID. But those social forces have been coupled with the spread of powerful opioids, particularly fentanyl.

A dose of synthetic fentanyl can be up to 50 times stronger than a dose of heroin. Other fentanyl analogues are often even more potent. The danger comes when a user expecting a less powerful opiate takes fentanyl or one of its analogues—and might inadvertently take a heavy, deadly dose.

Across the country, both federal and state governments have recognized that existing punitive policies have failed to reduce drug use, and have prevented individuals from accessing lifesaving care. In the past decade, the US has increasingly funded harm reduction, a public health approach that emphasizes providing tools that keep users safe in whatever way they choose. The best-known harm reduction tool is naloxone, a non-addictive medication that reverses an opioid overdose that most states have made accessible over-the-counter.

[Related: The war on drugs didn’t work. Oregon’s plan might.]

But at-home tools that would proactively allow people to detect adulterated drugs have been slower to reach the ground, largely because some states criminalize them as drug paraphernalia. Fentanyl test strips are a major example. First developed to detect the opioid in urine, they’re only a few dollars apiece, can be ordered online, and only require a tiny sample of the drug mixed with water to tell someone in minutes if they’re about to consume a contaminated substance.

The test strips are a good first step to letting drug users make informed decisions about their products, say harm reduction advocates who spoke to Popular Science. But fentanyl has spread so widely in the drug supply that by the time the strips are made available to the public, their usefulness has faded.

“Given the opportunity to test their drugs, to decide what they’re going to use and not use, people are going to gravitate toward that,” says Nadia Eskildsen, harm reduction coordinator with Women with a Vision, a nonprofit in New Orleans, which decriminalized the strips last year. But legislation is stuck playing “catch-up” with tools that work on the ground. “People want to know what’s in their drugs, what’s in their drinking water, what’s in their food. Unfortunately only one of those things has prohibitions against finding out.”

In interviews conducted by a team at Brown University, people described using the strips to find dealers who weren’t selling contaminated products, or taking fentanyl-positive drugs more slowly than they would have.

“We’ve been using forensic chemistry for decades to tell people what’s in their drugs, but only after it’s too late,” says Nabarun Dasgupta, an epidemiologist and data scientist with the Opioid Data Lab, which is co-run by the University of Kentucky in Lexington, University of Florida, and UNC-Chapel Hill. People find out what they were using only in court—or their family learns after an overdose, he adds. “Both of those are too late to affect any kind of autonomy and help people make better decisions about their health.”

That’s changed rapidly. Alabama, Tennessee, and New Mexico all decriminalized the sale of test strips in the past month, and Louisiana’s legislature will vote on a bill this spring.

Jim McClendon, the Republican chairman of the Alabama Senate’s Healthcare Committee and sponsor of the state’s recent decriminalization bill, says to him, decriminalization was an obvious step. “There were over 200 deaths in Birmingham in less than a year’s time from overdoses of fentanyl,” he says. “By legalizing strips it gives the buyer the opportunity to see if he just bought fentanyl. It’s pretty simple.”

Many local legislators criminalized the strips after the Drug Enforcement Agency wrote a model bill in the 1970s, which banned “equipment used or designed for use in identifying or in analyzing the strength, effectiveness, or purity of controlled substances.” As states cracked down during the war on drugs, many adopted similar language.

Dasgupta attributes the national turnaround in part to the 2021 authorization of use of federal opioid response funding to purchase test strips. Now, if a state decriminalizes the strips, it has access to millions of dollars to purchase the tools.

On his end, McClendon says that Alabama’s bill wasn’t a response to the federal funding; he’d been contacted by the director of a county Board of Public Health, who said he was interested in the resource.

According to data shared with PopSci by the Centers for Disease Control and Prevention, only four jurisdictions—Indiana, New York state, New York City, and Clark County, Nevada—had used the agency’s funding in the most recent year to buy or distribute the strips. Another 10, from California, Florida, to Kentucky, plan to do so in the coming year. A Department of Health and Human Services spokesperson told PopSci that 17 states had reported using its grants to purchase test strips so far.

But test strips “used to be more helpful when we first started seeing fentanyl,” says Don Jackson, the director of the syringe access program at Survivors Union, a drug user-led organization in Greensboro, North Carolina. “Then we started seeing it in everything. I pretty much tell everybody, you can count on fentanyl being in [opiates].”

In the past two years, Survivors Union has been using a mass spectrometer, called an FTIR, to peel apart all the ingredients in a street drug, not just fentanyl. Jackson has been running the $37,000 machine, donated by the artist and activist Nan Goldin, for people accessing services at Survivors Union since 2021.

While the main testing takes place at the organization’s building, it also works closely with Dasgupta and others from the Opioid Data Lab to monitor trends in drug supplies.

Dasgupta works with a chemistry lab at UNC to retest the samples with an even more precise gas chromatography machine, which can detect new adulterants as they emerge. Now, he and his peers are working to create a blueprint for universities across the country to do the same. “We’re trying to use the same exact techniques that have been used in crime lab and forensic post mortem lab settings, but bring them to people earlier,” says Dasgupta. “That way they can decide what to do about the drugs that they’re encountering.”

The FTIR testing isn’t as immediate as an at-home test strip, but it still empowers the individual to make a choice with information on the drug’s contents. That’s especially true because the primary tests are run at Survivors Union itself, rather than in an academic lab.

“People feel a lot more comfortable that they’re not coming back here with some scientist,” says Jackson. “I allow participants to come back if they want while I’m testing, so they can see how it goes down.”

Jackson can run anywhere from three to a few dozen FTIR tests in a week. “I have some people who, every time they get some, they want to test it,” he says. “That’s smart. That’s what I would do.” Other people “just want to see because their boyfriend nodded out for two hours the other day, or it gave them a rash and hives popped up.”

The test takes about 15 minutes, and Jackson sends the results to participants over text or email, along with information about the side effects of the different substances. It also has been critical in picking up foreign substances beyond fentanyl, like the heroin additive xylazine, which has started to appear in national drug markets. The veterinary tranquilizer isn’t an opiate, but it wards off withdrawal symptoms and can make an individual’s supply last longer. It can cause skin wounds, too, among other deadly side-effects that are almost impossible to treat if a user doesn’t know the cause. “Without the mass spectrometer, I would have surely died,” the Survivors Union’s executive director wrote in an essay last spring about discovering a foreign substance in her supply. When the organization put out an alert about the tranquilizer, it saw a surge of interest in testing.

The FTIR analysis has even proven useful in tracking the prevalence of fentanyl in regional drug supplies over time. A study in British Columbia published earlier this year found that monthly fentanyl concentrations fluctuated between 5 and 10 percent over the years 2017 to 2019. But Jackson says that the software needed to run that type of analysis costs another $8,000—a sum Survivors Union can’t afford it right now.

[Related: With opioid overdoses on the rise, the U.S. should consider one proven safety measure]

The fentanyl test strips remain useful, however, both for double-checking an FTIR result, which sometimes misses small concentrations of fentanyl, and for testing drugs that are less likely to contain the opiate, like cocaine and MDMA. (Fentanyl has been found as an adulterant in stimulants and other, non-opiate drugs.)

“That’s definitely where test strips come in handy, if you’re testing things where you wouldn’t expect fentanyl to be,” says Mary Figgatt, a graduate researcher in epidemiology at UNC who collaborates with Survivors Union.

The challenge is making sure that all of the tools are available on the ground. “The laws really need to go further if they’re going to be changed to allow fentanyl test strips,” says Dasgupta. North Carolina’s decriminalization bill—like those in Alabama and Louisiana—only specified test strips, so the FTIR machine exists in a legal gray area. Dasgupta isn’t worried about the risk himself, but says “it’s a barrier to new programs starting up.” For example, a county health department might be unwilling to open a spectrometry testing program if it doesn’t meet the letter of the law.

“This bill was focused on test strips,” McClendon, the state senator from Alabama, notes. “Now, if the Department of Public Health comes back with something that’s more precise, I will accept their position as health professionals.” But, he says, he hasn’t yet heard about other options.