Shapewear has changed a lot over the centuries. How much has it changed us?

Too compressed to be stressed. 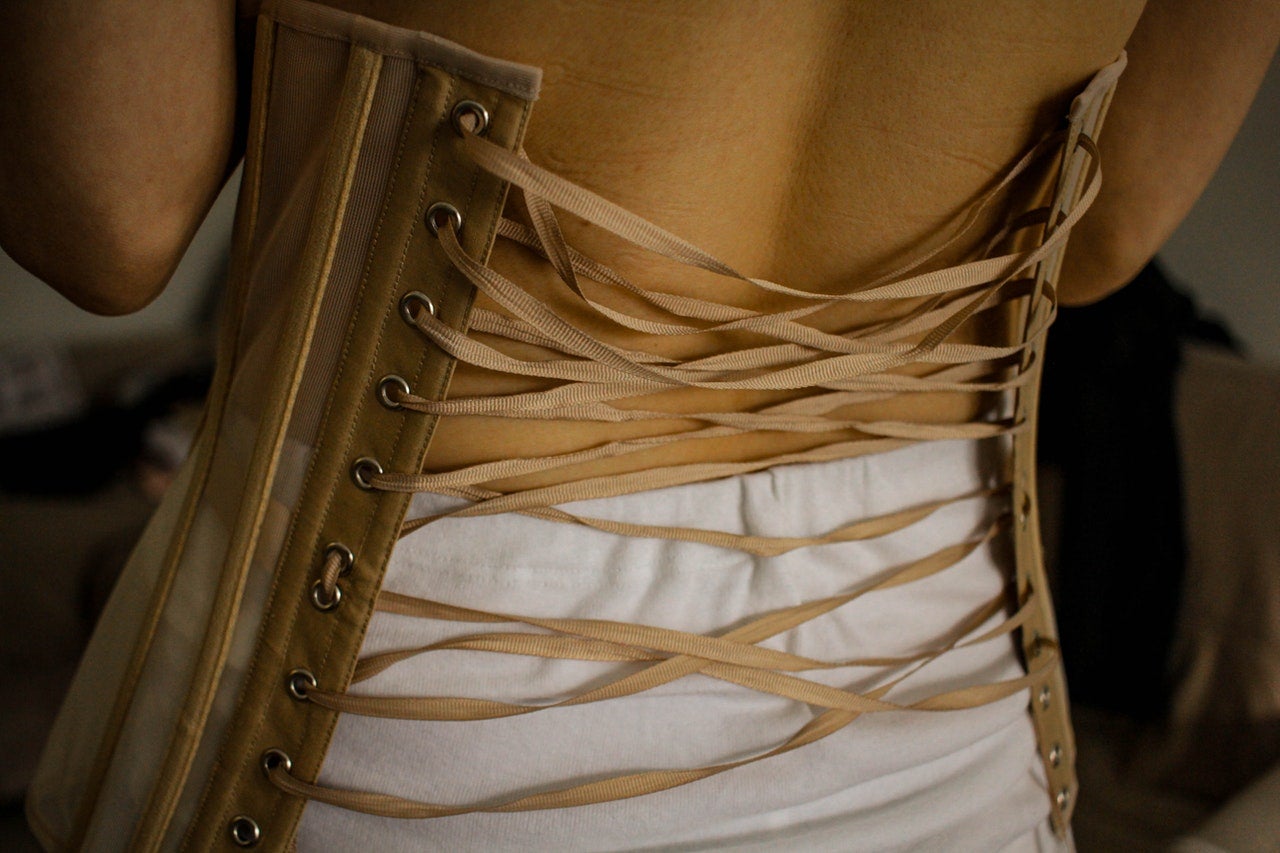 The history of shapewear is a bit more complicated than you might think. Sergey Meshkov via Pexels
SHARE

Struggling with what to wear? For centuries, people (and particularly women) have turned to shapewear—a trendy term that encompasses our long history of shaping bodies to clothes, instead of the other way around—to give them a foundation for their fashion statements. But do these garments help us or hurt us? From corsets to girdles to Lizzo’s new line, this is a short history of shapewear:

The most recognizable shapewear in the world is undoubtedly the corset—essentially a system of support made of fabrics and reeds, whalebones, or metals. While corsets are often thought of as oppressive and painful, the 500-year history of this garment is a little more complicated.

Since the 1500s, women (and, in certain periods, men, too) have used such stiffened bodices to smooth the torso and give shape to the breasts. Eventually, they also were used to scaffold the outer garments, namely heavy skirts, creating the illusion of different figures by pulling some parts of the body in and padding others out.

Early on, a V-cut shape was all the rage, and corsets were covered with a “stomacher,” a panel of fabric cut to create the illusion of a wide upper body tapering to a narrow point. But the waist was not actually dramatically squeezed; rather, the corset was designed to support upright posture. Hoopskirts, billowing sleeves, and other optical illusions were used to further accentuate the ideal “conical” form.

[Related: Perfect posture doesn’t exist—but you can still improve yours]

Around 1800, by contrast, fashion of the Regency period (in which the popular series Bridgerton is set) called for empire-waist dresses, which emphasized the bosom and effectively shrouded the wearer’s natural waist. In this period, corsets were either totally foregone or primarily used to support the breasts, with most women wearing “short stays” that quickly tapered off instead of longer corsets that shaped the entire abdomen.

In the 1830s, the waistline dropped back down and, as the Victorian era dawned, an hourglass figure became all-important. This was the era when “tight-lacing,” or lacing a corset as tight as possible, even at the risk of skin abrasions, restricted breathing, and musculoskeletal pain, was at its peak. But even in this period of the “wasp waist,” tight-lacing was not universal, and the women who promoted it were condemned by both doctors and self-appointed moral authorities for their supposedly dangerous vanities.

Nonetheless, “the Corset Myth”—that for 500 years women wore long, restrictive corsets tightened within an inch of their life—persists, according to Hilary Davidson, a dress and textile historian, curator, and archaeologist, who recently wrote about the myth for Slate. But what’s important to remember is this: corsets were not usually painful for daily wearers in periods past. In fact, short stays and other corsets are enjoying a bit of a resurgence fueled by cottagecore TikTok influencers and other fashionistas—not just because of their aesthetic appeal, but also, at least in some cases, because users find them more comfortable and supportive than modern underwire bras.

While tales of their loathsomeness have been greatly exaggerated, corsets nonetheless fell out of fashion. Or, more precisely, they were pushed—by fear-mongering doctors, feminists (rightly) concerned with the manipulation of women’s bodies, and, perhaps most importantly, by the US War Industries Board. In 1917, the board asked consumers to stop buying corsets so they could redirect the 28,000 pounds of steel hidden inside the frames into building WWI battleships. By the time the war had ended, American style had irrevocably shifted.

But women of the post-war period weren’t foregoing underwear. They were wearing a new-fangled thing called bras.

Patent records suggest that underwire innovations were in the works by the turn of the 20th century, but failed to make a splash. One early success came in 1914, when Caresse Crosby patented a “Backless Brasserie.” As a New York City debutante a few years prior, Crosby had refused to wear the standard corset to her ball, instead asking her maid to help her sew handkerchiefs and ribbon into a bralette. Over the next 30 years, Warner Brother Corset Company (now Warnaco), which purchased Crosby’s patent, would reportedly go on to earn $15 million from the concept—and countless new bra styles came to market.

[Related: Why it’s really important for your bra to fit (and how to finally make it happen)]

But for many decades, women did not often wear bras alone, says Wendy Burns-Ardolino, the dean of the college of humanities and social sciences at the University of Houston Downtown and author of Jiggle: (Re)Shaping American Women. Instead, they paired their bras with girdles, which used rubberized materials instead of whale bones to shape the female form. In the 1920s, flappers used girdles to flatten their bodies for a trim, “boyish” figure, while in the 1950s, the garments helped to create an hourglass illusion.

In the 1960s, girdles began to be supplanted by pantyhose, which combined stockings and panties into a single nylon-based garment designed to airbrush the color and texture of the legs, smooth the figure, and reduce chafing all at once.

But by the 1970s, the women’s liberation movement was ditching girdles and pantyhose, too—without necessarily tearing down the assumptions of beauty that underlied them. The result was that the “best” kind of corsetry was now called exercise. Jane Fonda videos and the rise of the jogging trend were part of a larger turn to “an internal form of girdling,” Burns-Ardolino says. Spandex (also known as Lycra or elastane) became the shapewear d’jour, offering similar benefits to pantyhose or girdles, but with more flexibility and a carefully-cultivated athletic vibe.

Today, we live in a hybrid world—one where a certain level of foundational “fitness” is expected among women, and Spandex bras and leggings, waist trainers (a Kardashian-led trend), push-up bras, and other garments add a final polish.

Modern shapewear is, essentially, a compression garment, says Karen LaBat, an apparel products researcher and author of Human Body: A Wearable Product Designer’s Guide. It does not alter fat or muscle, but rather displaces it to better approximate a desired shape. For example, a natural roll in the back might be moved to the armhole of a garment, the better to conceal it. In the process, shapewear also offers a smoothing effect for everything contained within the garment—similar to the corsetry of yore.

In some contexts, compression can be good for the body. Compression stockings can improve blood flow and reduce swelling in the extremities—a boon for athletes, people with diabetes, and anyone traveling long distances in cramped spaces. “Compressed muscles fire efficiently, especially if injured,” Dallas Mavericks team physician T.O Souryal told ESPN in 2006, when the NBA considered banning full-length compression tights. “Players with muscle strains benefit from the improved circulation and support.” (The league eventually carved out an exception for players whose tights were deemed medically necessary.)

In excess, of course, squeezy styles can have their downsides. Too-tight abdominal shapewear may cause temporary acid reflux by pushing stomach acid back through the esophagus. In some people, shapewear may also compress nerves, leading to symptoms like tingling or numbness in the extremities. When compression garments don’t fit, they can also cause problems with blood flow and swelling. “It if makes a mark, it’s too tight,” the physician Jamile Wakim-Fleming has said. But that hasn’t stopped wearers from shaping, smoothing, and stuffing it all in.

After an early pandemic slump, the shapewear market is bouncing back with a new message: shapewear is everyday wear. While companies like Spanx (which was founded in 2000) still offer bread-and-butter foundation garments, athleisure and shapewear companies have since built compression into clothes themselves, offering bras, leggings, bodysuits, tank tops, and more made from classic shapewear materials. “Shapewear, in the past, was presented as something for weddings or special events,” Massimiliano Tirocchi, who co-founded Shapermint in 2018, told the Washington Post. “Now we’re showing it as something you can wear even if you’re working from home.”

And that’s not the only industry innovation. Shapewear manufacturers increasingly want consumers to know that shapewear is for everyone. This week, rap superstar Lizzo will debut her shapewear line, Yitty, a “no-shame, smile-inducing” brand developed with the sportswear company Fabletics. It’s a project Lizzo has been thinking about for most of her life. “I was like: ‘Guys, I’m telling you, I’m trying to revolutionize shapewear and our relationship with it and with our bodies,’” she recently told the New York Times. The line will offer leggings, underwear, bras, and more in two compression weights from sizes XS to 6X. (Spanx, by contrast, currently goes to 3X in most styles, while Skims goes to 5X.)

[Related: Your social media ‘fitspo’ is not a good influence]

These messages—shapewear as everyday wear and shapewear for everyone—may complement each other, or dramatically clash. There is little peer-reviewed research on the psychological effects of shapewear for consumers, but what is known paints a complicated picture. Not having access to desired garments because of brand sizing discrimination understandably tanks self-esteem, according to marketing professors Daiane Scaraboto and Maria Carolina Zanette. But the researchers have also reported that by promoting both “constricted femininity and flexible feminism,” shapewear has also caused self-esteem issues and identity conflict among consumers.

Cruically, shapewear (compression or otherwise) can also be a powerful tool for transgender and non-binary people seeking to create a body shape more in line with their gender identity. While most shapewear scholarship to date focuses on the limitations and opportunities for cisgender women, this narrow scope must change if these garments are to be truly appreciated as physical artifacts and cultural symbols with many, varied, and sometimes contradictory meanings.

It remains to be seen whether or not Yitty sparks a revolution. As the history of shapewear shows, we’ve done a good job making people feel bad about the foundation garments they use, while continuing to uphold the unattainable beauty ideals that fuel the industry in the first place. While more kinds of shapewear may not be the solution, Lizzo’s message hits home: everyone deserves comfortable clothing and to feel comfortable in their own skin.