This is your brain on Christmas music

Love it or loathe it, the annual barrage of holly, jolly tunes has some power over people's psyche. 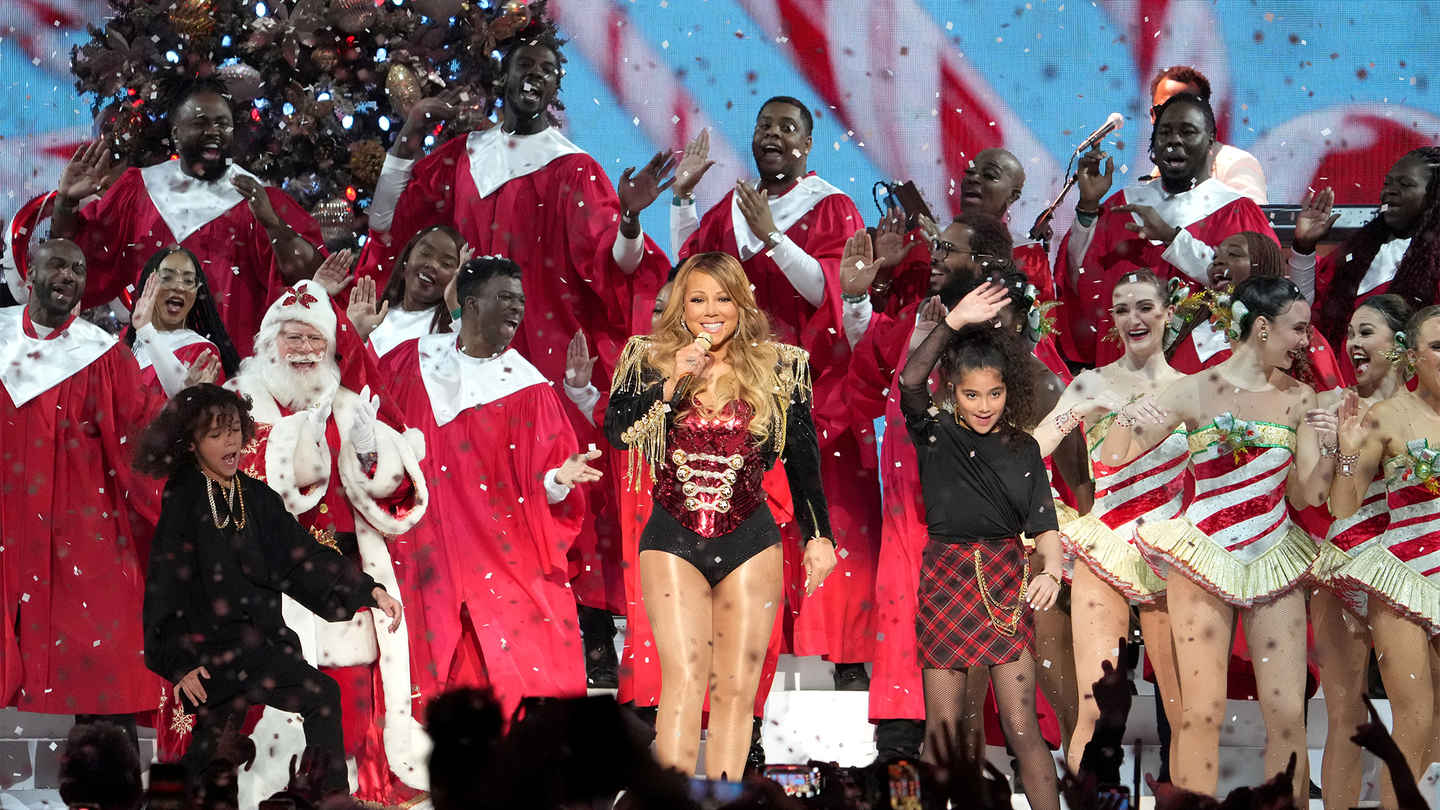 Mariah Carey performs with her twins Moroccan Cannon and Monroe Cannon during her "Merry Christmas To All!" at Madison Square Garden on December 13, 2022, in New York City. Kevin Mazur/Getty Images for MC
SHARE

“I don’t want a lot for Christmas. There is just one thing I need.” You probably know the next line, even if you haven’t heard any other Mariah Carey song. In December, you either can’t avoid her, or you can’t help trying to hit the high notes with her.

Artists from Carey to AC/DC to Zendaya have recorded seasonal songs, hoping to break into the coveted and lucrative Christmas music market. Classic and modern carols generate roughly $170 billion a year, according to Billboard; more than 15 million people asked Amazon’s Alexa to play holiday tunes in 2020. In addition to Carey’s multi-decade chart topping, “All I Want For Christmas is You,” you also can’t escape hearing “Last Christmas” by Wham! or “White Christmas” by Bing Crosby before all the eggnog or coquito is gone.

[Related: ​​The psychology behind our love of Christmas movies]

In addition to being big business, there are some psychological drivers behind why so many of us feel drawn to this musical genre like ants to a gingerbread house. “A lot of Christmas repertoire is very nostalgic. We listen to much older music [now] than we listen to in the other 11 months,” says Joe Bennett, a forensic musicologist at Berklee College of Music in Massachusetts. “So, it’s that one time of the year where we are prepared to go back to this old repertoire.”

One of Bennett’s research interests is the meta characteristics of holiday songs. He’s used both machine and human analysis to create a small database of 78 beloved Christmas classics from the UK music charts to identify common patterns. While performing what’s called a “corpus analysis” on the tracks, he found nine recurring themes in the lyrics. The most popular ones described the nostalgia of returning home, a feeling that many people experience as they travel back to loved ones for the season. “I speculate—and it is nothing more than speculation—that this is why we are prepared to keep coming back to this old music,” Bennett says.

Timelessness is one reason why you might see just as much Perry Como and Ella Fitzgerald on a holiday playlist as Michael Bublé and Ariana Grande. According to Bennett, pop music is socially functional, meaning young people in particular use it in whatever way they want to, whether that’s falling in love, wallowing in heartbreak, or dancing with friends. But the function changes a bit as they head home for the holidays and share the listening experience with their older relatives. “You are going to want pop music that appeals to multiple generations at the same time. Not something like EDM or emo for a heartbroken student,” says Bennett.

Often, playing Christmas music in the background helps set that scene. But what stimulates those fuzzy feelings in the human brain? Amy Belfi, a neuroscientist at Missouri University of Science and Technology who studies autobiographical memory and how memories are evoked by music. Some of the future clinical applications of her work include studying how music could potentially help people with Alzheimer’s disease recover some memories.

For Christmas music, Belfi agrees that our love for it all comes back to nostalgia. “I think that a lot of the reason why people love Christmas music is more about those associations than the actual sounds itself,” she tells PopSci. “There are Frank Sinatra versions of these songs that have been around for decades that our parents and grandparents and kids listen to. That is perhaps unique to Christmas music.”

[Related: Spotify is trying to figure out how our music preferences change as we age]

As Belfi’s research shows, music linked to memory activates an area of the brain located above the forehead called the medial prefrontal cortex. This section of the brain also has a stronger connection to autobiographical memories over historical memories: for example, baking cookies while wearing a festive apron in the family kitchen, and not the name of the US president when the song came out.

With Christmas music, autobiographical memory is often tied to our families and childhoods, resulting in what psychologists and neuroscientists call a reminiscence bump. Because many people form their musical preferences between the ages of 15 and 30, the music that was popular around that time of life is associated with a resurgence in autobiographical memories.

Additional research suggests that the reminiscence bump can even be inherited in a way. “Undergraduate college students had a reminiscence bump for music that was popular when they were teenagers, but also when their parents were teenagers,” says Belfi. “There’s this intergenerational transmission that you’re nostalgic for music when you were a kid, but also your parent’s music.”

Not everyone feels joy when they hear carols. That could be because of a few different factors: bad memories associated with Christmas, constant repetition over the course of the holiday season (which some research suggests could be bad for retail workers’ health), and even a rare disorder called musical anhedonia. This condition isn’t common, but some people simply aren’t emotionally moved by music.

One study from the University of Barcelona measured this by watching people listen to different genres of music in an MRI. Afterward, they played a game where they could win money. “The [scientists] looked at the reward regions of the brain and found that the people with musical anhedonia showed normal responses to winning money, but not to music,” says Belfi.

Beyond a few special individuals, however, holiday tunes are largely beloved. And one of the reasons for that may be changing over time.

“What I think is culturally interesting about Christmas music is that in recent decades, it reflects a more secular and multicultural America,” says Bennett. While the traditional religious carols like the tranquil “Silent Night” remain popular, other seasonal hits have filled up people’s playlists. The silly “Dominick the Donkey” by Italian-American artist Lou Monte has became a cult classic since its release in the 1960s. José Feliciano’s 1970 Spanish and English classic “Feliz Navidad” still draws billions of listens on the radio today. Run DMC’s “Christmas in Hollis” from the ‘80s, *NSYNC’s “Merry Christmas (Happy Holidays)” from the ‘90s, and Sia’s “Candy Cane Lane” from 2017 have only expanded the reach of the holiday music canon. It’s a medium that can truly connect everyone.

“There’s [music] in every culture across history,”  Belfi explains. “Almost everyone loves it and has some connection to it. It’s a large part of the human experience.”

Looking for a playlist to share with your loved ones this holiday season? PopSci has you covered. Check out our favorite songs (including some that we can almost guarantee you’ve never heard), and let us know your favorites.