You Probably Don’t Have Smartphone Pinky

But if you do the effects are likely temporary 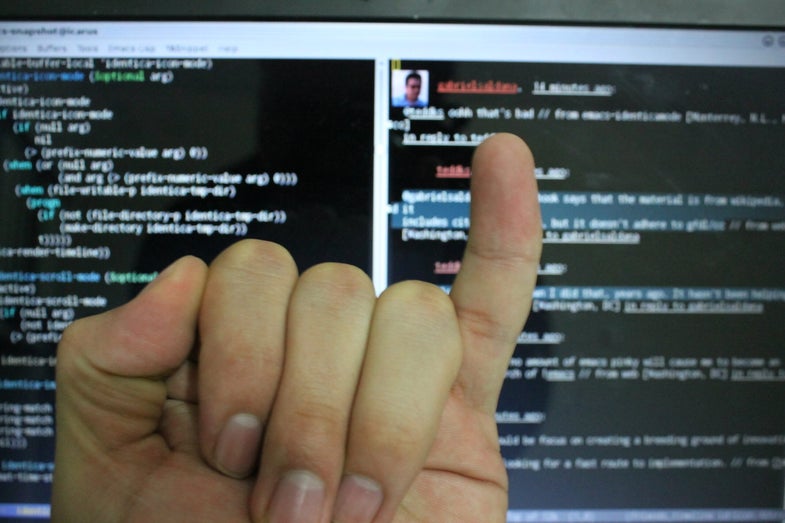 Over the past year, cell phone users have been sharing photos of some wonky pinky fingers. The pinkies are curved or at an angle from the rest of the fingers, and users claim that the shape of their hands has changed from over-using their smartphones. A headline from an article posted today on the Daily Mail screams, “People share shocking photos showing how their hands have been left deformed by the way they hold their gadget.” Others though, including some surgeons who specialize in hand surgery, aren’t quite as convinced.

That’s probably not what’s going on in those photos, says Rachael Rohde, the chair of the Public Education Committee for the American Society for Surgery of the Hand. “It would be pretty hard to deform any of your fingers just by holding a cell phone,” she says adding that it would probably take many years of gripping a phone really hard to make any noticeable change. “As a hand surgeon, I think it’s more likely there’s something going on here to begin with, another condition, that they didn’t realize [they had] and thought it might be related to the phone.” She suggests the culprit might be Dupuytren’s contracture, a condition that develops over time that causes some hand tissues to stiffen.

Dan Polatsch, a co-director of the New York Hand and Wrist Center, thinks the pinky angles might in fact be caused by heavier smartphones, but the effect is likely temporary. “It’s no different than when you wear a sock with a tight elastic band all day and then you take it off. There’s a slight indentation for a brief period of time, but it corrects itself,” he says.

There are other reasons pinky fingers might look a little different from the rest of the digits. Clinodactyly, an inherited curve of the pinky, and Repetitive Strain Injury(RSI), which is often caused by typing or repeated actions that cause stress to a part of the body (as its name implies), could also be culprits.

It may be that people are just more inclined to believe that it’s from their gadgets. Over the past few years, people have been fascinated by the ways in which technology is physically affecting us, Rohde says. A few years ago, there was BlackBerry thumb and more recently there’s been text neck. These concerns have largely been overblown, the conditions affecting few (if any) tech users.

That’s not to say that overusing our gadgets doesn’t have an effect. Keeping the arms bent all day can cause numbness in the pinky and ring finger, Rohde says—experts are calling that cell phone elbow—and repeated stress on that nerve can cause it to be damaged over time, resulting in muscle loss in the hand. RSI or using a phone that’s too big for your hand can also cause debilitating pain.

So, chances are, you don’t have smartphone pinky and if your pinky does look funny, it’s unlikely that your phone is the culprit. But if holding or typing on your cell phone is causing you discomfort, Polatsch suggests changing your ergonomics—hold the phone differently in your hand, or place it on a table or other surface. If you’re texting all the time, consider Bluetooth or voice-to-text software instead of typing. If you make many of these changes and the pain persists, though, Polatsch recommends seeing a doctor.