Thin Batteries That Fit Behind Armor Could Power Tank Electronics 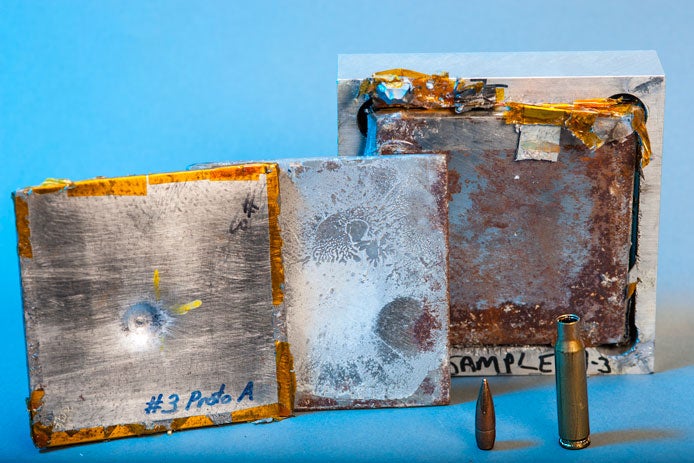 Giant armored vehicles are hard to hide. When rolling forward, they’re loud, lumbering hunks of metal, but with the dark of night and the engine turned off, they can gain some semblance of discretion, their listening metal hulls hiding from all but those either very alert or immediately nearby. This state, called “silent watch,” means the tank (or infantry fighting vehicle, or troop carrier) becomes a waiting body–its sensors run on low battery and scan the world around it, waiting until it’s needed to power back on and drive forth.

This constant low level of battery power can significantly drain a vehicle (as anyone who’s ever had their car go dead after leaving their headlights on overnight can attest). While the problem is clear, the solution–adding more batteries–isn’t so simple. Take the Bradley Infantry Fighting Vehicle, a tank-like tracked troop-carrying armored vehicle with a gun in the turret on top. First introduced in 1981, the venerable body is already as full as can be of required parts, so there’s not really any room inside to add batteries.

But what about outside the hull? Between the armored plates that surround the hull and the actual hull itself is a tiny sliver of space. A new battery, patented by Raytheon last September, is thin enough to fit in that space, and it’s flexible and durable enough to still work after the armor its attached to has been hit by bullets.

To better understand this armor, Popular Science spoke with Chuck Betack, a retired U.S. Army colonel and Iraq War veteran who is now Director of Land and Joint Programs at Raytheon’s Integrated Defense Systems business. Betack emphasized the “silent watch” role of the tech, noting how more battery power to vehicles in the field can keep them ready for action longer.

As to the specific placement of the battery, it can go underneath a Bradley’s first level of armor, right next to the hull, and it could go under an external layer of armor, between that armor and the hull. In place behind the armor, the battery can withstand shots from medium machine gun rounds or modest rifles and keep working. It’s also light, making it a relatively trivial addition to a multi-ton vehicle.

The battery was originally developed to meet a military need, and if the military chooses to incorporate it into their vehicles, it’ll first have to go through the U.S. Army’s Tank-automotive & Armaments Command (TACOM) in Michigan. This will help them figure out how best to integrate it. It need not be limited to military applications, though.

“You could even think about using it on lighting, putting it somewhere that’s far away from any ground source of power and you’re getting power from the sun and storing it up,” says Betack.

As long as the military continues to use old vehicles, they’ll likely need to keep adding more power storage to keep up with the demands of newer electronics. And in new vehicles, finding additional places for batteries could increase their utility and longevity. Sliding in a thin layer of battery is hardly the worst solution. And in the right vehicle, it can turn careful power management into a full night of silent sentry duty.