This Tiny Bioreactor Could Save Lives Far From A Hospital

It could save lives in remote locations 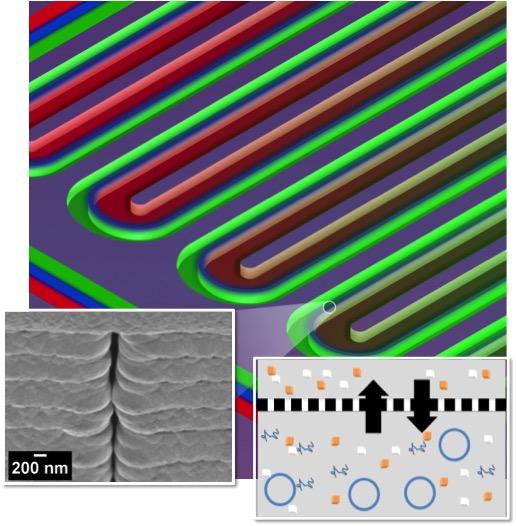 The main image shows the device's reactor and feeder channels, as well as the membrane that separates them. Bottom left, an image of a nanopore. Bottom right, an illustration of how molecules pass from one side of the membrane to the other. ORNL via Eurekalert
SHARE

For soldiers and people in remote locations, it can be hard to get life-saving drugs they need, such as those used to treat diabetes, anemia, or infections. That’s because the proteins in these drugs often need to be kept in cold storage, which isn’t so easy to do if you don’t have a working refrigerator on hand.

Now researchers at the Oak Ridge National Laboratory have created a way to synthesize proteins with a small bioreactor so that they can be used immediately in patients most in need. A study about the new device was published recently in the journal Small.

Normally, scientists use living cells to create these proteins. But the bioreactor can pump out small batches of the same proteins without having to keep cells alive.

The device is made of silicon and consists of two parallel channels nearly 16 feet long (485 centimeters), wound in a snake-like fashion. The two are divided by a membrane punctuated with tiny pores; one side feeds the other with the chemicals, and the reaction takes place on the other. When the device is shaken, the desired proteins pass through to one side of the membrane, while the mixture of acids and cell extracts that yielded them stay on the other.

By changing the size of the pores and the length of the reactions, the researchers were able to generate protein yields that were even higher than similar-sized commercial bioreactors.

The researchers didn’t mention how much their device would cost to produce at a large scale, but they are hopeful that people without much medical expertise could purify the proteins to use them on patients who need them most. Their bioreactor could also be used to make small batches of drugs that are prohibitively expensive or in short supply, such as pharmaceuticals to treat rare diseases.