There have only been a dozen sightings of Magnapinna squid over the past 30 years. 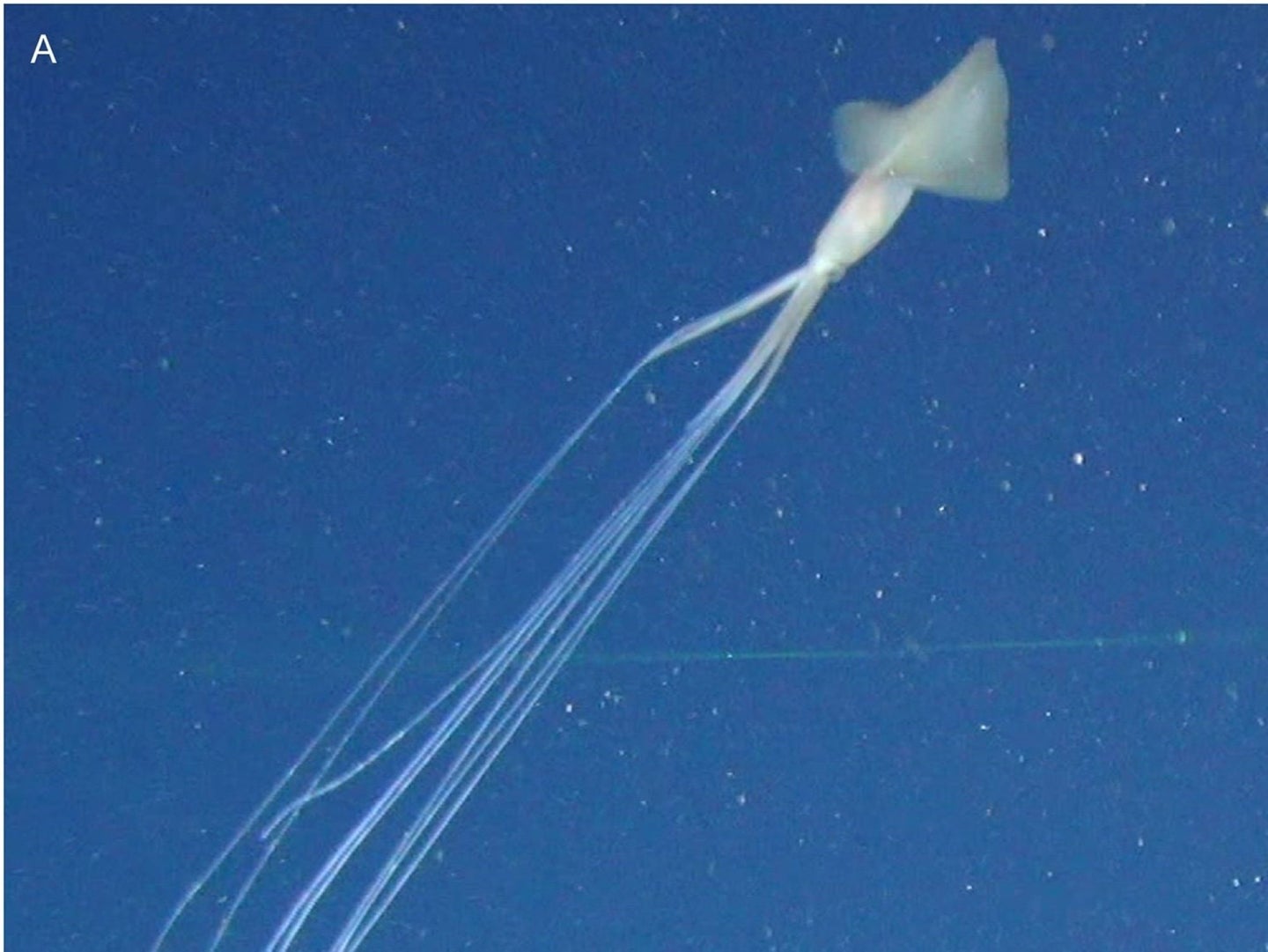 Five bigfin squids were documented off the coast of Australia. Deborah Osterhage
SHARE

Bigfin squid sightings are incredibly rare—the creatures live thousands of feet below the surface of the ocean, and only about a dozen sightings have ever been reported. In a study published Wednesday in Plos One, researchers captured the creatures on video off the coast of Australia, floating eerily through the blue. The footage is creating a stir among squid researchers, as it provides clues to a better understanding of mysterious, largely undiscovered life that lurks deep beneath the ocean’s surface.

The videos were taken in a bay called the Great Australian Bight using a combination of remotely operated vehicles (ROVs) and towed cameras. The towed cameras floated about two miles underwater, keeping a distance of between six and 14 feet from the seafloor. The cameras took constant video and a still photo was taken every five seconds. The researchers then reviewed the still photographs, and when they found that they had captured images of bigfin squid, they reviewed the corresponding footage for video of the delicate, flower-like creatures.

In all, the study details five sightings of the Magnapinna genus off the southern coast of Australia. Researchers found differences in the size and structure of the squids that indicate the sightings were of five different individuals, rather than the same squid five times. That just about doubles the number of bigfin squid sightings in the southern hemisphere, and it’s the first time the squid has been spotted in Australian waters. The videos taken also capture a previously undocumented and still unexplained action: filament coiling, where the squids draw in their arm filaments (long, thin feeler-like appendages) close to their body.

The researchers couldn’t ascertain the exact species of the squids in the videos (there are three in the Magnapinna genus). However, they were able to build a pretty good idea of the anatomy of the squid using visual analysis and other methods—including using lasers attached to the ROVs—to find that the squid’s tentacles are about 11 times longer than their body length. The purpose of these tentacles remains elusive, but researchers believe that they are “sticky” and can be used to trap their food. The five squids were dramatically different in length, with the shortest juvenile sighted measuring about 2.5 inches long and the largest adult at about six feet. The videos show that the squids are a translucent orange-pink color, which has been difficult to determine so far since it’s so dark and difficult to see even with cameras in water that deep.

There’s a lot we still don’t know about the animals that might live in the deepest, most pristine parts of the ocean. The last paper published on sightings of bigfin squids was in 2001 and described eight bigfin squid sightings off the coast of Texas. Because of the vast distance between sightings, scientists believe that the squid could live all over the world and could actually be very common in the ocean ecosystem. And just to emphasize how little we know about various life forms in the deep, in the past 10 years, two research forays into the Great Australian Bight alone have identified 277 new deep-sea creatures.

The bigfin squid sightings off the coast of Australia contribute invaluable knowledge to further our understanding of deep-sea life. “Little is known of Bigfin Squid, and many other deep-sea cephalopods, largely due to the inaccessibility of their vast yet little explored deep-sea environments,” Deborah Osterhage, lead author of the paper, told Mongabay. “Each sighting contributes more knowledge of these squids.”