This Japanese cooking pot converts the heat from a boiling pot of water to electricity that can charge your smartphone... 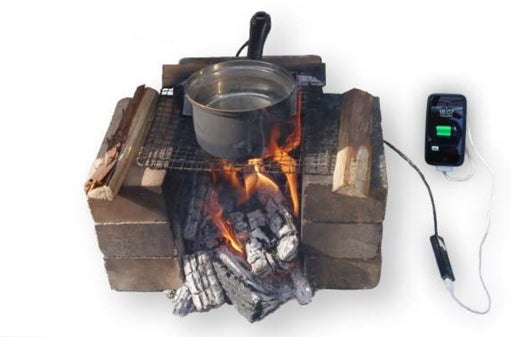 This Japanese cooking pot converts the heat from a boiling pot of water to electricity that can charge your smartphone at the same time it cooks a delicious meal. The invention, inspired by footage of Japan’s earthquake victims building fires to keep warm, could prove a boon after a natural disaster, when all you’d have to do to keep communication open would be to light a campfire.

The Hatsuden-Nabe thermo-electric cookpot contains strips of thermoelectric ceramics that use the difference in temperature between the bottom of the pot and the water boiling inside it to generate electricity. Using this method, the device takes between three and five hours to charge an iPhone–not much longer than using a crazy space-age AC charger.

In addition to helping victims of natural disasters and being useful for camping trips, the cookpot could provide citizens of developing countries with a method of charging mobile phones, even if electricity is spotty. The device went on sale this month in Japan for $300.