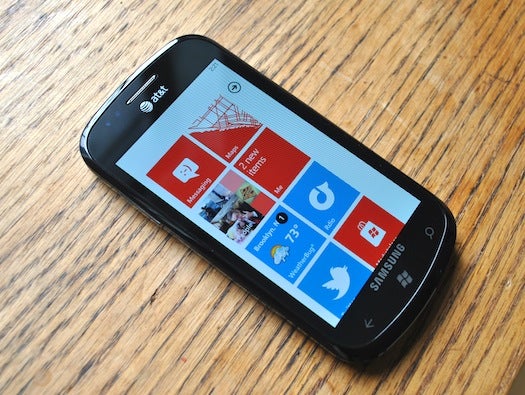 Our first review of Microsoft’s Windows Phone noted that the basics were all in place: a stylish and innovative interface, smooth and fast operation, and a tight integration of Microsoft services like Xbox and Zune. But it was the first version of a major OS, and as we all know, those are never really great–just look at how far iOS and Android have come–so here we are again, taking a look at Microsoft’s first major update, known as Mango, which was released this week. It solves lots of the problems with had with version 1.0–though some still remain.

What’s new are essentially fixes to just about every issue users of the first generation of Windows Phones had. Multitasking, copy/paste, fast app switching, Twitter integration: all here. Plus tons of little details we hadn’t thought to ask for, like a very smart Groups concept that links certain contacts together for easy monitoring (like Work or Family), or the legions of pretty animations that are the hallmark of this OS.

Lots of stuff! The basics of the phone are all great–the Live Tiles, halfway between an icon and a widget, manage to take the best parts of both, showing clear information like weather, unread emails, and media without having to go into the app itself. The OS as a whole is damned pretty, as pretty as iOS in its way, with flat, bold colors and a heavily text-based interface. The OS feels even faster than before, with hardly a stutter to be found. The app selection is surprisingly good; there may be fewer apps than Android or iOS, but the quality tends to be very high, and, to be honest, the catalog has just about every app you’d want. 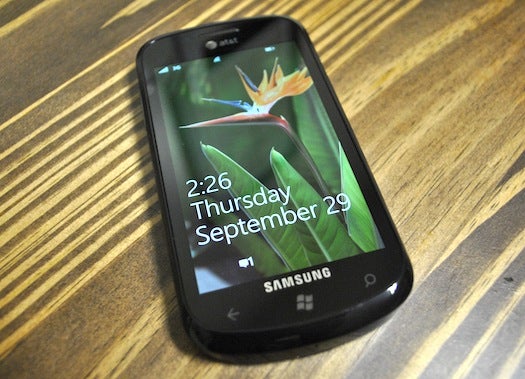 The very pretty lock screen, which shows a lot of information at a glance (unread messages/emails, for example) and lets you control music when it’s playing.

Other great things: The lock screen has pretty pictures and lots of (but not too much) information. The Zune app for music, video, and podcasts is amazing, at least as good as iOS’s media setup. Windows Phone has the best Netflix app on any mobile platform, without question. The “People” app (which is kind of like an overview of your friends’ social media presence) and the “Me” app (which feeds into your narcissism/anxiety by showing how people are reacting to your social media presence, with comments and Likes and all) are unexpected ways to socialize, and good ones. Mobile IE9 is an awesome web browser. Local Scout is kind of like Google Places, but better: wherever you are, tap the Scout button, and you’ll see stuff to do, places to eat and drink, that kind of thing (and this will also get better and more complete with time). Facebook integration is intensely good, and I love that (in another WebOS swipe) it integrates Facebook chat with other kinds of chat, so conversations with each person are in one place, regardless of whether you used Facebook or texting or MSN to chat. (Although please add Google Talk and AIM.)

But what’s hard to get at, with all those features (and Mango is seriously crammed full of features; those are just what jumped out at me), is how fun and easy Mango is to use. Microsoft may advertise how easy it is to get in, get your information, and get back to your life, but I found myself unpocketing the phone just to dive into its swoopy, angular menus. A lot of thought has been put into making this thing entertaining to use, and it’s largely succeeded.

There are still some little weirdnesses, here and there. Bing Maps, while mostly a fine substitute for Google Maps, lacks public transit or bike options. Not enough apps take advantage of Live Tiles. Multitasking is still not done: Mango uses a WebOS-lookalike for this, in which you hold down the back button and are presented with big thumbnails of your currently-running apps which you can swipe through and select. That’s great, in theory, but it has some problems. Apps take up multiple thumbnail slots, sometimes, for no reason I can tell. And, more to the point, multitasking isn’t really multitasking. That’s a tired thing to say, I know, but it’s true: Windows Phone apps have to be adjusted to take advantage of Mango, and just about none of them have. Rdio, for example, can’t play music in the background while you’re reading your email or browsing the internet, and if you switch to another app and then switch back to it, you’re taken to the Rdio homescreen, at which point you have to search for the song you were listening to all over again. That sucks. Same problem with other apps like Twitter and Kindle. Weirder, sometimes the back button would just refuse to take me into the multitasking thumbnail view, leaving me to hammer away on it for awhile and then give up. 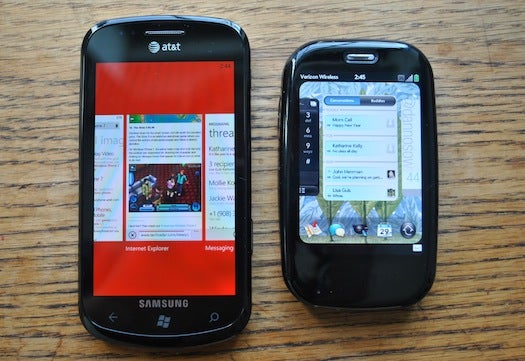 Side by side with a Palm Pre Plus, from which Microsoft aped the multitasking thumbnail interface for Mango. (We’re not upset, it’s a great idea and we might as well use it.)

Oh, and you can’t close apps from the thumbnail view, like you could with WebOS. That’s sort of indicative of a deeper problem with Windows Phone, that it’s completely inscrutable. In theory, that’s just another approach, designed to keep things simple– but if you’re going to give me this power user thumbnail thing with multitasking, let me be a power user! Along the same lines, I would really love some universal search. When you hit the magnifying-glass search button, you’re immediately taken to what’s basically a Bing web search app. It makes some small steps towards being universal, searching through the app Marketplace and such, but it doesn’t search your contacts or apps. It should. Fix, please.

The other thing that really bothered me, that seems like a minor thing but became a legitimate frustration, is the menu bar. On every other phone, in the history of the world, you could look at the top of the screen and see the time, battery information, and connection status. That’s not frivolous. Those things are important. Windows Phone does away with that. Sometimes, in some apps, you can see the time, and tap near it to see the battery life and connection status. In a lot of apps, you can’t. Using Twitter and want to know what time it is? Go back to the homescreen. Then go back to Twitter, and wait for it to reload, because it doesn’t support multitasking yet and had frozen into a hibernation state while you checked the time. This is really, really dumb.

Windows Phone Mango is rolling out to currently available devices now–I used it on a Samsung Focus, which is about a year old–and new hardware will be coming out soon, including the first Nokia-made Windows Phone. Price will probably be around $200 with a contract, as with most phones.

It’s getting there. Windows Phone is, in my opinion, the second-best OS out there, after iOS. It’s more cohesive, reliable, pretty, and fast than Android, and less dead than WebOS. It still has a little maturing to do–once the apps start taking advantage of multitasking, it’ll be a different phone–but really, it’s ready to go now. I have no hesitation in recommending it: it thinks differently, and works differently, but often just as well or better as any of its competitors. Most importantly, it’s easy and fast, especially for social media–it’s probably the best-connected social media phone out there. I may still be waiting for it to really live up to its promise, but that doesn’t mean that it isn’t an extremely usable platform right now.