Finally, A Simple Way to Throw Applications Between Your Computer and Your Phone, While They’re Running

A team of computer scientists at MIT may have just solved one of the digital age’s most annoying occurrences, one... 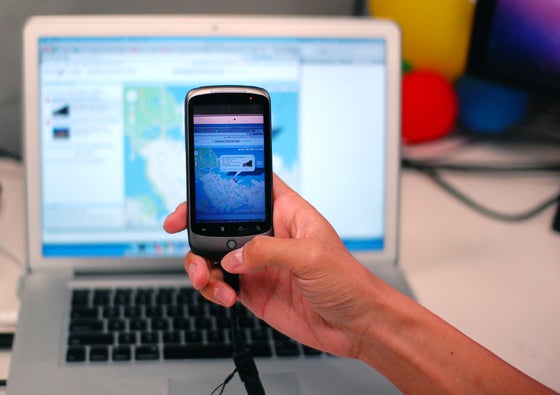 A team of computer scientists at MIT may have just solved one of the digital age’s most annoying occurrences, one that somehow has not been addressed in any real way by major device manufacturers. It’s the I-have-something-on-my-computer-screen-that-I-need-to-transfer-to-my-phone problem, and it plagues everyone. Now, a small software solution has come to our aid, allowing users to throw applications–in their same states–between computers and mobile devices using the smartphone’s camera.

The problem: as you’re preparing to leave for dinner, you look up Yelp reviews on your desktop, or maybe you map the restaurant in Google Maps so you know where you’re going. You do this out of ease–it’s simpler to perform these tasks with a full keyboard than via your iPhone or Droid. But now it’s time to leave, and you really need that Yelp screen or map on your phone display.

Generally, this is where you start the process all over again on your smartphone. But a program called Deep Shot is drastically simplifying this process. Many Web applications convey information via a uniform resource identifier (URI)–this is the same long string of symbols that you see in a Google Maps link–and that can be exploited via computer vision algorithms.

Here’s how it works. Deep Shot requires installing a little bit of software on both your phone and any computers you want it to interact with. To toss, say, a map you’ve augmented with specific directions from your computer screen to your phone screen, you simply snap an image with the mobile device. Your phone identifies the app running on the computer screen and sends a request to the computer, where the corresponding software then extracts the URI from the designated app and sends it to the phone.

Now in possession of the URI, your phone launches Google Maps AND plots the directions you designated on your computer. The same would work with an app like Yelp. Snap the image on your computer screen and your phone doesn’t just open Yelp, but goes right to the specific restaurant page you were perusing on the computer. The URI doesn’t just transfer app information, but the specific state of the app as well.

It also works the other way, from phone to desktop/laptop. Right now, the app only works with apps that reveal their states through URI, but that’s a lot of common apps. Some aren’t optimized to work with Deep Shot, but with minimal additional coding they could be. Which means it may soon be possible to use your mobile device and your desktop more seamlessly as if they were extensions of the same device. In other words, in the way we always knew we were intended to.