Or perhaps jet propulsion for phones will work better 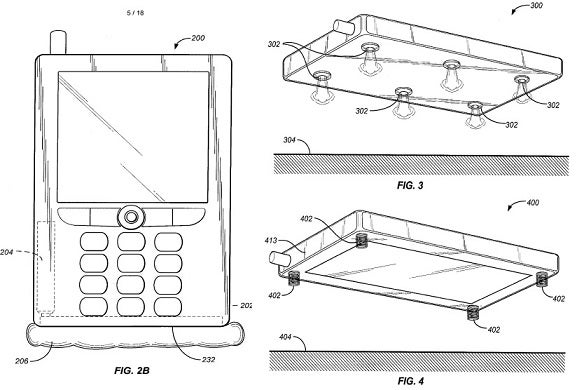 If you have a smartphone, odds are you’ve experienced those few seconds of horror after your precious (and pricey) gadget slips out of your hands. You flail and grab, arms akimbo, in a vain attempt to save your phone from certain destruction — or at least certain scratching. Yeah, you know what I’m talking about.

Not content to let his phone suffer, and apparently not a fan of cases, Amazon CEO Jeff Bezos had another idea: An autonomous airbag or propulsion system that can safeguard a phone.

Bezos filed a patent application for this idea quite a while ago, but it became public on Thursday, and was first reported on Geekwire. The system would use the phone’s own gyroscope and camera to detect motion and distance from other objects to determine if the phone is indeed falling, Geekwire explains. Then the system would deploy protective measures.

As shown in Fig. 2B in the above diagram, one idea is to insert airbags into the phone, which would automatically inflate when the phone is at risk of impact. The patent application even discusses using a thruster system to properly orient the phone so that it lands on the airbags. Alternatively, you could just use the thrusters (Fig. 3) to land the phone like a hovercraft.

A third concept, shown in Fig. 4, involves deployable springs, which as the Register points out seems inspired by “Inspector Gadget.” Bezos and Amazon VP Greg Hart are listed as the device’s inventors.

“These portable devices are sometimes vitally important to the user as they often contain data that is related to the user’s work and personal life,” the patent application explains earnestly.

As they say, necessity is the mother of invention — one can only imagine what happened to Bezos’ phone to inspire such an invention. Of course, it might be easier to just hold on tighter.