The Phantom line of ultra-high-speed video cameras have held PopSci’s rapt attention even before the v12 model won our Best... 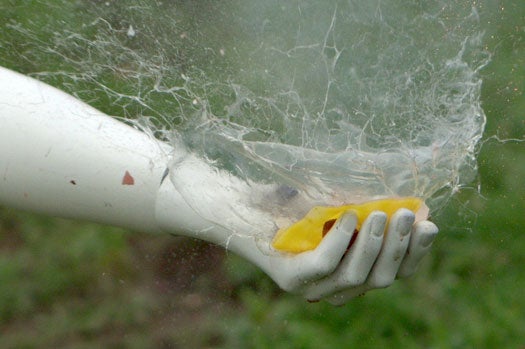 The Phantom line of ultra-high-speed video cameras have held PopSci’s rapt attention even before the v12 model won our Best of What’s New Award in 2008. So what better way to celebrate our nation’s independence than aiming a Phantom v641 from New Jersey’s Vision Research at all manner of explosives, resulting in high-definition footage of fireworks going off at a glorious 2,000 frames per second?

Not so much the celestial dazzling burst kind of fireworks — you’ll get plenty of those this weekend regardless — but a serious investigation of what exactly happens when you stick firecrackers in, for instance, a jar of mayonnaise. The Phantom, which is typically used for everything from super slow-motion sports instant replays to manufacturing processes to military flight tests, captures it all in scintillating, elegant slow motion.

Stay tuned for our in-depth look at the workings of the Phantom camera and much more high-speed video in the coming weeks. But for now, let’s explode some Jell-O. Happy Fourth of July!

And by popular demand, some unedited clips of our favorite explosions: