Our complete impressions and analysis of Apple's new tablet are here, with photos and video

The iPad, one of the most anticipated gadgets in history, is here. And the stakes, clearly, are high: to my knowledge, this is the first time Apple has referred to one of their products as “magical.” Here’s what it’s like to play with one.

For more photos, launch the gallery

If you read our live coverage of the event, you’re probably already set on the specs and features. On stage, demo’d from afar by Steve Jobs, the iPad is basically a giant 9.7-inch, 1024 x 768 iPhone. But when it’s in your hand, the story changes significantly.

More than ever before, Apple has minimized every element of a device that’s not the giant, beautiful screen. It’s a difficult gadget to photograph, because essentially it’s little more than an aluminum-backed screen floating inside an inch-thick bezel. Colors are amazing on the LED-backlit LCD, and the amount of real estate to work with on the 1024 x 768 screen is amazing. And there’s really no “up” or “down”–the proximity sensor rapidly flips the entire display to accommodate however you’re holding the tablet. A few times it seemed a little too eager to flip if I was half way between vertical or horizontal, but for the most part, its responsiveness is impressive.

User experience wise, it’s the iPhone at its core. Which is not a bad thing–as Jobs said, 75 million iPod touch and iPhone owners will intuitively dive right into the iPad. You touch something, and it responds. But look closer, and it’s the subtle tweaks like flipping a page in an e-book, complete with the reflection of the next page on the back–that make it probably the most fluid and thought-out implementation of a touchscreen we’ve yet seen.

Surprisingly, Apple themselves engineered the iPad’s brain, a 1GHz chip they’re calling the A4. And it’s fast. The iPad’s heavily graphic interface moves with buttery smoothness, even upscaling 3-D games.

Typing
Typing is done via a soft keyboard, or with the added accessory keyboard you can use on a desk with the iPad docked. The soft keyboard is good, but as many suspected, typing is not 100% natural. You can enter text in several different ways: in landscape or in portrait, holding the back with one hand and pecking with the other, trying to stretch two thumbs while holding with both hands, iPhone style, or resting it on your lap (the iPad’s case, sold seperately, folds out into a nice stand). It’s clear that the natural way to type is resting the iPad in your lap–one-handed pecking is pretty slow going, and unless you have largest of hands, typing with both thumbs while holding it in portrait mode is pretty awkward.

There will be an acclimation period, for sure, but don’t expect to write long-winded messages or War and Peace with the iPad while you’re standing up.

Apps
The iPad runs all of the App Store’s apps out of the box either in a “letterboxed” presentation at the iPhone’s resolution, or upscaled to full screen on the iPad. Playing with Facebook and a few games, the graphical quality of the upscaling is reduced, but they’re usable. Interestingly, the iPhone’s soft keyboard is what pops up for text entry, not the iPad’s larger board.

But this will likely only be a temporary problem, as developers have 60 days to convert their existing applications to the iPad’s native resolution using an SDK released today.

Maps
Talking to Apple’s Phil Schiller, he said that if he had to name a favorite app, Maps would be it. On paper it doesn’t do much more than the iPhone Maps app, but at this scale, you almost feel like you’re working for the CIA as you touch your way through beautiful full-screen satellite info. Street View is also very impressive at this resolution. “Like science fiction,” Schiller said as he pinched and zoomed in on the Eiffel Tower.

iBooks
Business-wise, the biggest news today us arguably iBooks–an addition to the iTunes store carrying e-books from five major publishers, with more to be added. The buying experience looks nice and iTunes-like (books are in E-Pub format), and the reader app itself is beautiful. Books sit on a shelf waiting for you–a presentation we’ve seen in a few e-reader iPhone apps already–and when opened they’re stunning on the big screen. Photos, video, anything the publishers want to include, it will be reproduced beautifully. Page turning with your finger is a joy–not a click-and-wait-two-seconds deal like on the Kindle.

But unlike the Kindle, you’ll be reading while staring into an LED-lit LCD, not e-ink. This means it’ll be much more tiring on the eyes.

iWork
Somewhat surprisingly, Apple has developed iPad-native versions of their word processing, presentation and spreadsheet software, which are available for $10 each through the App Store. Their all-touch interfaces are pretty impressive for light editing of text and presentation/layout work. Contextual menus pop up on anything you touch, allowing you to easily resize, move, or reposition photos, charts and text in layouts. Again, I wouldn’t want to type anything more than a few paragraphs with the soft keyboard. There’s always the hardware keyboard you can attach, though.

And while that may seem like a curious move, it’s a smart one. Apple is preparing us for a day when all of our computing, save for lengthy text input, is done with a multitouch screen. With the iPad’s iWork suite, they’re starting from the ground up with word processors and spreadsheets–applications people have been using on computers since the very beginning.

See both iBooks and iWork in action here:

Photos
Photos sync from your computer (there is no built-in camera), and their presentation is an iPhone/iPhoto hybrid. Albums can be touched, dragged, and popped open really smoothly. And another gadget category Apple probably just snuffed out: digital photo frames. When docked, the iPad can cycle through photos at full screen. Bye bye, digital photo frames: no one is sad to see you go.

In Your Hand
It’s not too heavy, not too light, as per usual with an Apple device it feels right. It’s just small enough to not be awkward, but it’s toeing the line at times when you try to type while holding it in your hands, as detailed above.

As far as use-cases, Apple’s demo video showed most users curled up with their iPad at home, which seems to me the most natural place for it. Since it’s all screen, I wouldn’t want to throw it in my bag without some sort of protective case, and I also can’t imagine whipping my iPad out on the subway–it’s a bit large for that. But I thought the same thing about the iPhone initially–everyone’s looking at my screen!–but now I do it all the time, so time will tell.

For more photos, launch the gallery 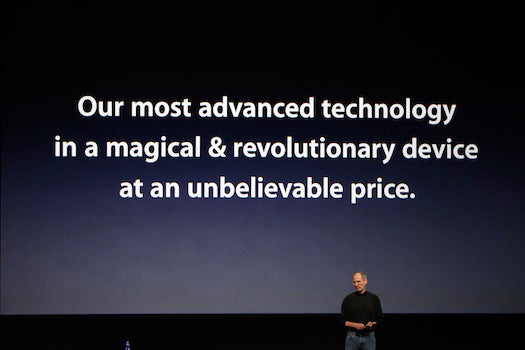 A New Category of Product 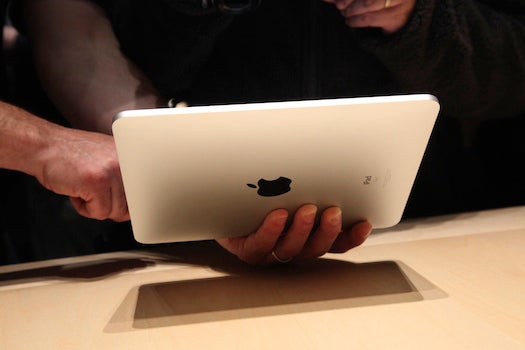 Larger Than an iPhone, But Portable

From the back, the iPad is clad in the same aluminum used in Apple’s iMac and MacBooks. 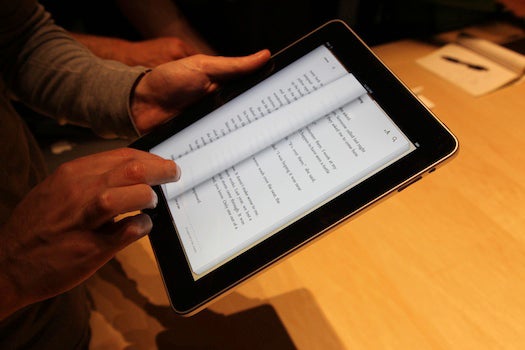 Reading E-Books on the iPad 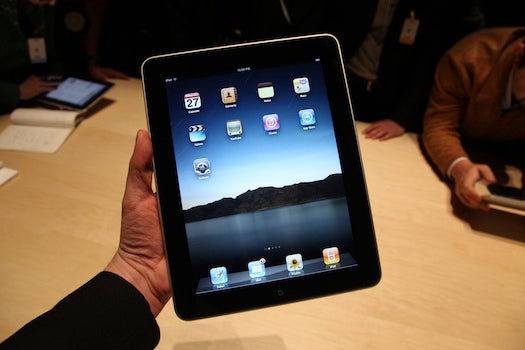 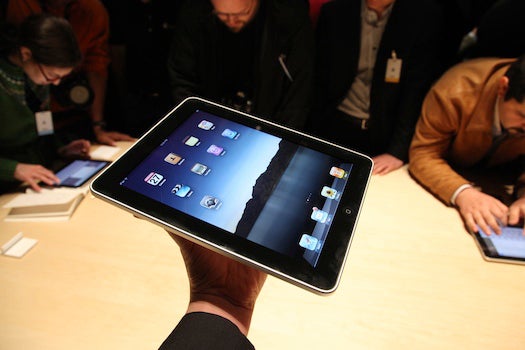 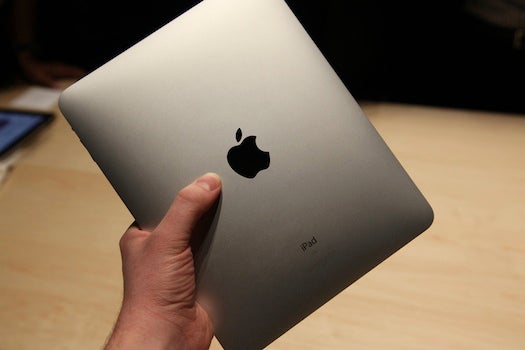 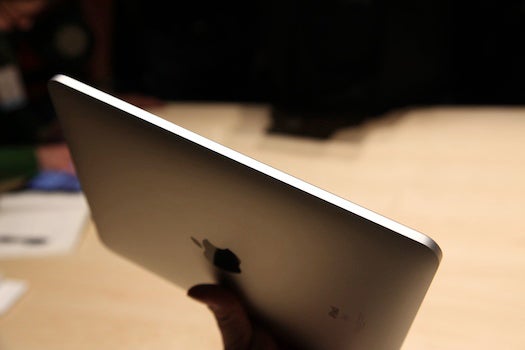 Half an Inch Thick 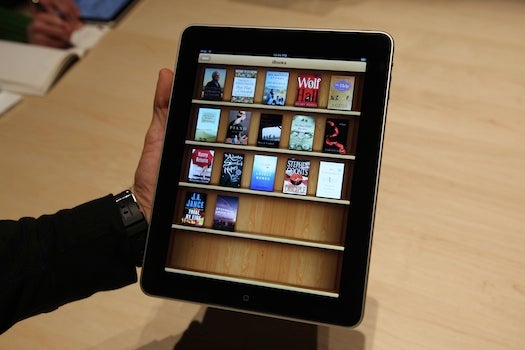 iBooks on the iPad 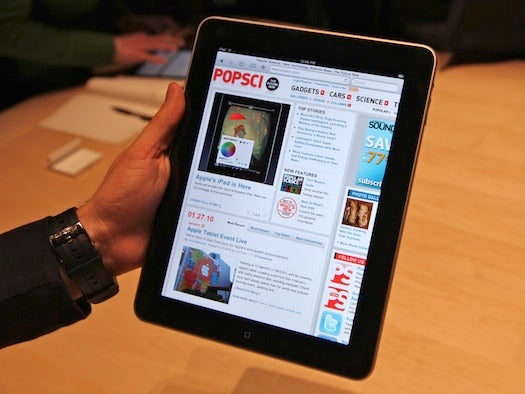 The Future In Your Hands! 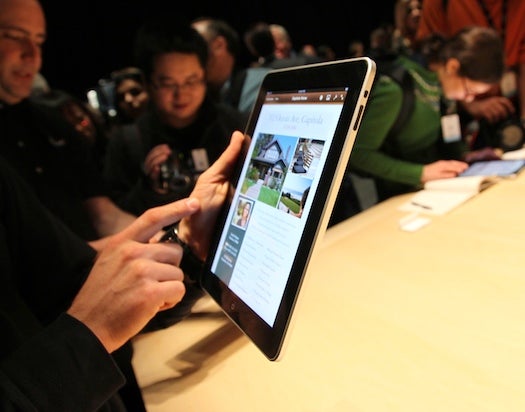 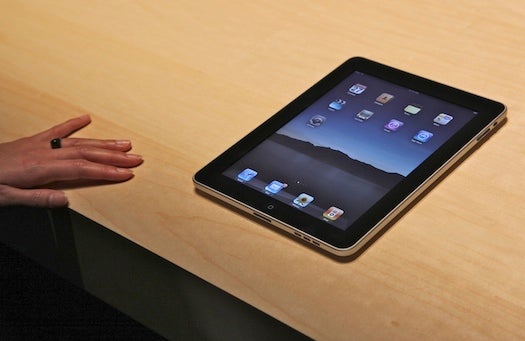 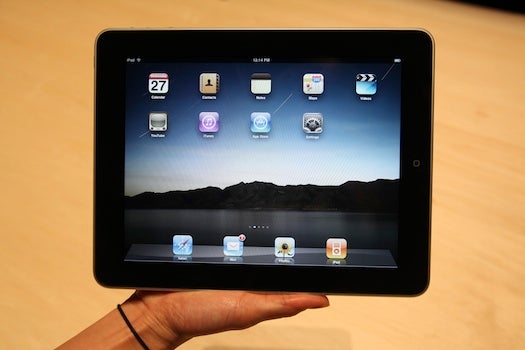 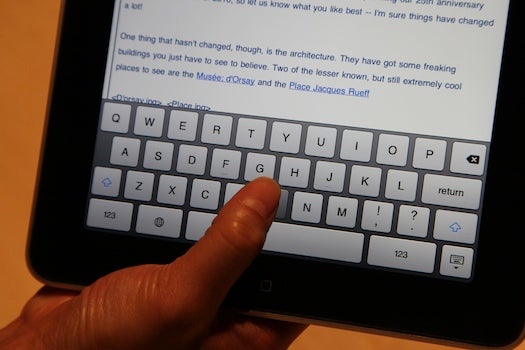 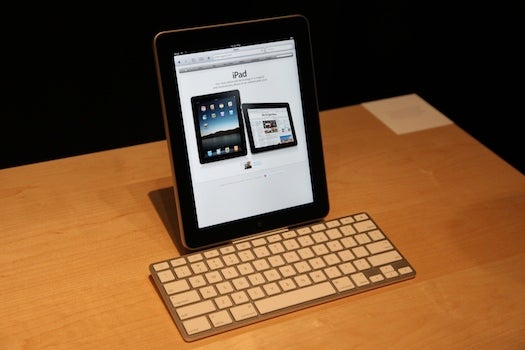 For Those Who Prefer a Real Keyboard