Is the iPad 2 worthy of replacing an original iPad after just under a year? 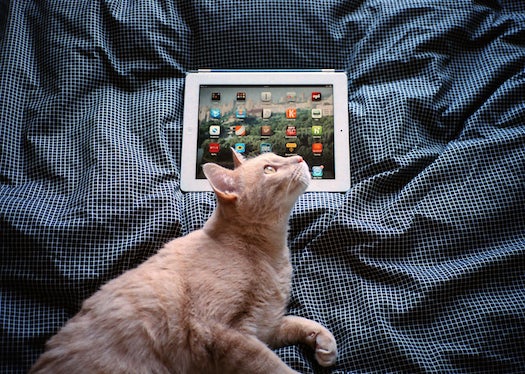 In just over a week of availability, the iPad 2 is on a 4-5 week back order online, and is practically impossible to get with expedience in any shop anywhere in the country. Even for Apple, it has all the looks of a staggering sales achievement for what is, on paper, a very modest spec-bump to a machine already owned by over 15 million people. Something’s going on here.

Apple’s ability to somehow find and goad the fervent, ga-ga, spirals-for-eyes consumer hidden inside even the the most frugal, stoic and principled technology buyer should be no surprise to anyone by now. The last ten years or so for Apple has been a period of consistently winning products, which makes it easier to miss the heavy psy-ops that accompany each new launch into the marketplace and into your hands. But they’re there.

So when the time comes to write a review for one of said products, it’s often tough to figure out what exactly you’re writing about–the product, or the creamy aura of marketing that surrounds it; the two are so wedded together that it’s often hard to see where one ends and the other begins. But for the reviewer, whose job in the end is to provide useful information about something others wish to learn about or consider for purchase, it’s important to keep things focused on the slim aluminum and glass tablet computer in your hand.

But keeping these two things separate has been hard for me with the iPad 2, a subtle, measured refinement of what was already a great product. Is the iPad 2 the best first tablet you can buy right now? Without doubt. Is it so much better than its 11-month, 19-day-old predecessor to warrant an immediate $500-$830 upgrade? It is not. With that out of the way, let’s get down to it.

Starting from the inside, the iPad 2 has a new processor, a dual-core chip Apple calls the A5 and claims is 2x faster than the original iPad’s single-core A4. RAM is up to 512MB (from 256MB) and graphics performance is cited as a significant 9x boost. In addition to GSM for AT&T, there’s also the option to have a CDMA radio built in to connect to Verizon’s 3G data network without a bundled MiFi hotspot. A gyroscope for more fine-grained orientation measurements is also inside, like in the iPhone 4.

On the outside you’ll see a dot on the front and a slightly larger aperture on the back for the front- and rear-facing cameras. The case has been thinned by 4.6 mm (33%), the weight shaved by around 80 g (~15%), with the aluminum bezel surrounding the display reduced to a hair-width of glass. It’s available in a new color, white, and has internal magnets to attach a nifty new folding Smart Cover, which can also wake the iPad from sleep.

What’s good is that this is the same iPad so many people loved the first time around, smartly improved. The most noticeable of these improvements is probably the processor upgrade. While the original iPad is by no means slow (even when running today’s most demanding graphics-heavy games) it’s the speed with which the iPad 2 glides in and out of different tasks that sets it apart. Doubling the RAM helps here too: app switching via the double-tapped home button is more responsive, and if you’re switching to Safari, there’s a better chance the page you were viewing will be stored in RAM when you return to it, eliminating the need for a reload.

And let’s not forget the Smart Cover, the $40 magnetic screen protector that has been cited by some early reviewers as reason enough to upgrade (oof). It is indeed conceptually and aesthetically miles ahead of the original Apple case–a black rubbery sheath that concealed all the glass and metal Johnathan Ive worked so hard to perfect. The Smart Cover is not as adept at propping the iPad up in your lap, though–when folded into a triangle, the panels tend to wobble, and at certain angles, the magnets tend to disengage.

Not a whole lot. Like its predecessor, the iPad 2 is the standard by which all tablet computers are now judged. Part of the reason for the rushy 12-month update cycle is to keep this competitive advantage; as the rest of the electronics world is pushing their first serious tablet efforts out the door, Apple’s already on version two.

What the “what’s bad” list turns into, then, is two things. First, a list of the improvements that should not be mistaken for groundbreaking leaps forward:

The second “what’s bad” list are all those things that the best tablets of today still don’t do well (and perhaps, by their nature, never will). It is an important list to keep in mind when considering a tablet purchase:

From $500 to $830, depending on your choice of flash storage capacity (16, 32 or 64 GB) and whether or not you want a cellular data connection (with either AT&T or Verizon) in addition to Wi-Fi. See the full pricing breakdown here.

I’m realizing now this review may come off a bit contradictory and weird. Don’t get me wrong–the iPad 2 is great. It’s a measured, smart improvement of what was already the industry-wide benchmark for personal, touch-based computing (a type of computing that, after a year of maturation, still has thrilling potential). Apple’s new version of Garage Band for the iPad is a perfect example of this potential–music software clearly becomes something new and exciting with a well-designed touch interface. The app currently has 1,547 five-star ratings out of 1,897–a great ratio for the typically troll-filled iTunes store.

But keep in mind that Garage Band, while introduced on stage along with the iPad 2, also works perfectly well on iPad 1. I cited what I think is the role of the reviewer earlier here because we could all stand to remind ourselves of this reality when considering Apple’s now standard 12-month life cycle for its products. Similarly, I was thrilled to find Tiny Wings, Angry Birds, and most other games I play on the iPhone 4 perfectly playable on my original 2007 iPhone, which I dusted off from a drawer.

While this may seem hypocritical from someone whose job is in part to keep up with the latest gadgets, I am a believer in using the gadgets you own. Using them for as long as is practical, rather than using them only to plan your next gadget purchase. With Apple dangling fresh carrots in front of our noses before we’ve even had a chance to digest the ones we just ate, this can be hard. But it’s something I think is important. A recent Wired cover story by Joel Johnson (again I’m linking to a think-piece by Mr. Johnson in an iPad review!) reported from the factories of Foxconn, Apple’s Chinese manufacturing partner, serves as a great reminder that treating gadgets as disposable commodities does not happen in a vacuum.

So if you’ve gotten this far, you’ll know that I think the iPad 2 is great. If a tablet is right for you, it’s the one to get. But if you already have an iPad, save yourself the upgrade anxiety, the gadget karma and several hundred dollars by at least waiting to see what comes around with next year’s iPad 3. Because in less than a year, we’ll be doing this all over again.