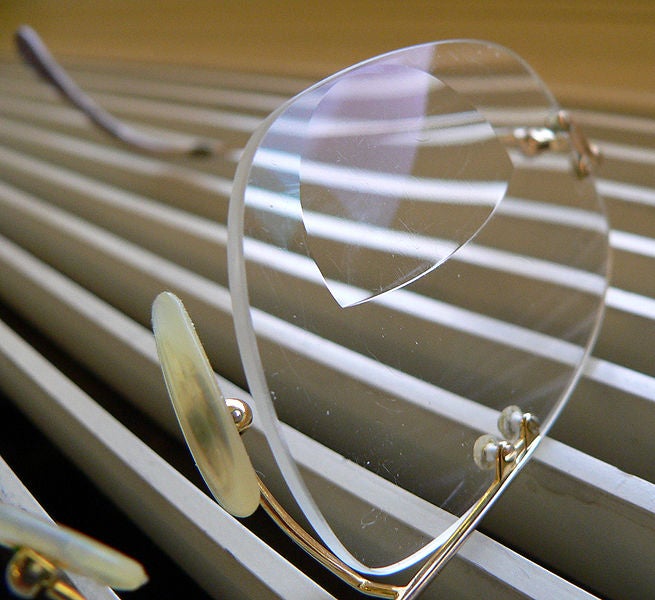 An inability to see both near and faraway objects isn’t uncommon, but the classic solution–bifocals–is hardly cutting-edge. I mean, thanks, Ben Franklin, but how about something more modern? A new type of engraved lens, invented by an Israeli researcher, allows the eye to see perfectly whether the object is nearby or in the distance, without adjusting perspective. No matter your vision, these lenses claim to provide perfect clarity.

So how do they work? Zeev Zalevsky, of Israel’s Bar-Ilan University, has created a lens treatment that involves engraving 25 tiny near-circular structures onto a standard lens. Each of those structures contains two concentric rings, and the structures are arranged in a grid formation. The rings provide a channel through the lens on which light can travel, which, according to Zalevsky in New Scientist, “results in an axial channel of focused light, not a single focal spot.”

Zalevsky claims that if the viewer focuses his or her retina (read: looks) at any point along one of these channels, “it will always see objects in focus.” I don’t totally understand how this works–it involves constructive vs. destructive interference and a very particular pattern to this grid of near-circles. I’m not sure whether this design is universal, or whether it has to be adjusted to fit the prescriptions of each individual patient. And what about camcorder compatibility?!

That’s not the only problem, either–critics note that this pattern of interference eliminates some of the light coming through the lens, which in turn can reduce image contrast. Zalevsky doesn’t deny the problem, but says the brain is able to adjust to the lower-contrast image “within seconds,” and effectively enough that the patient won’t even notice the difference.

Zalevsky co-founded a company, Xceed Imaging, to develop and market the technology. If it really does work, it might be a hit as a bifocal replacement. After all, since the engravings are spread over the entire lens, patients would no longer have to physically cant their heads in order to peer out of different parts of the lens. Hopefully it’s as effective as it is intriguing.