It took cartographers and explorers thousands of years to map every nook, cranny, and crevasse of planet Earth. Now, a... 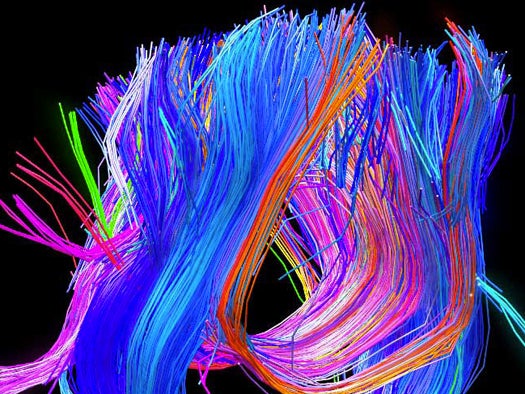 It took cartographers and explorers thousands of years to map every nook, cranny, and crevasse of planet Earth. Now, a consortium of researchers from across the U.S. is going to try to map the entire human brain in just five. Working with $30 million and just half a decade, the Human Connectome Project aims to create a first-of-its-kind map of the brain’s complex circuitry, detailing every connection linking thousands of different regions of the brain.

The team consists of 33 researchers at nine different institutions, including Washington University School of Medicine in St. Louis and the University of Minnesota, the lead universities in the effort and the sites where much of the brain-scanning will take place. Their success will depend in part on another HCP grant to another research consortium headed up by Massachusetts General Hospital and UCLA that will develop advanced, custom brain scanners with higher spatial resolution and increased sensitivity. The funds themselves come from various bodies within the National Institutes of Health.

How big is the project? It’s at least 90 billion neurons big, but that doesn’t even convey the enormity and complexity of the human brain. There are something like 150 trillion synapses – the connections between neurons across which signals pass – that electrical signals must negotiate. These neurons and the connections between them make up the circuitry of the brain, and the HCP aims to create a better picture of that circuitry than we’ve ever had before.

The project aims to tap state-of-the-art brain scanning technologies, including diffusion imaging, various MRI methods, and magnetoencephalography to map not just how messages move through the brain, but how various regions work together via networks and networks of networks to achieve the complexity that is the human mind. With map resolutions down to the voxel – small swaths of grey matter containing about one million neurons each – researchers estimate the HCP will generate about one petabyte of data, which will require its own supercomputer to process.

All that scanning, data gathering, and analysis should pay off though, HCP researchers say. The end result will be an open platform that other neuroscientists can use to test their own theories, hypotheses, and findings against. Such a map should help scientists find their way to deeper understandings of how the brain works as well as cures for complicated neurological disorders.